The Last Of Us Part II Advanced Tips

The Last of Us Part II Tips Guide: Dealing With the Giant Infected, Finding the Safes and A Few Special Arcade Games

We’ve covered the general basics of how to get through The Last of Us Part II with our general guide from a couple of weeks ago. But now it’s time to dig into the nitty gritty and really help you out with some key parts of the game – namely, how to deal with one of the largest enemies you’ll come across, and find some safes loaded with hidden goodies. Oh, and there’s some arcade games you can track down as well.
Let’s get started first with the boss fight against the Giant Infected, because he’s a handful and will rampage you quite easily if you’re not careful – even on the easiest level of difficulty. Here’s a walkthrough of how to take care of it.

Dealing With the Giant Infected

You’ll come across this enormous behemoth during the Ground Zero mission, in the hospital basement. This is going to require basically chipping away at him while keeping your distance when he strikes back. Otherwise, you’re going to get mowed down like grass. Firstly, don’t think you’re safe staying still. This creature will have no trouble bursting through walls to get to you. And if it grabs you at a pivotal point, it’s game over, so remember to keep your distance. The key here is to find pillars in the stage. That way, it can’t straight-up charge you, and has to circle around in an effort to get to you.
You’ll need to find your spots to strike with firearms, so make your shots count. This is especially true on the higher difficulty, as ammunition will be sparse. Figure out the space around you and remember to keep those pillars in mind. 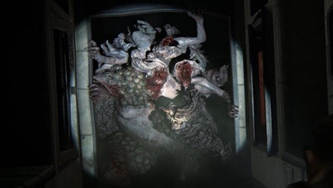 Also, before the fight, look for high- end weapons that will do a good deal of damage. You can melee strike in some spots, but your safest bet is using something like pipe bombs. They can leave a devastating effect, along with the incendiary rounds from your shotgun. If you’re within a close enough range, the flamethrower and the Hunting Pistol are also worthwhile choices, though, again, watch your ammo. Keep an eye open for gear located in parts of the basement, but don’t put yourself in a spot where you can be pinned down. Do enough damage and a smaller Stalker will break off. Don’t put too much focus on this guy, just hit him enough so that he backs off and you can continue chipping away at the other boss. Continue on this path and you’ll eventually bring the Behemoth down, though the Stalker will remain. If you still have some kind of incendiary weapon, use it to finish it off once and for all, and then make your way to the parking garage to escape. Survival!

Oh, What You’ll Find In the Arcade

If you pay a visit to the arcade – and deal with the Bloater as featured in the video above – you’ll have to look around and find a couple of significant machines. The first is The Turning, which was also featured in the first The Last of Us game. 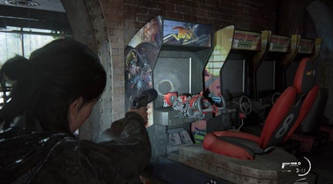 You’ll be able to find this fairly easy, featuring Angel Knives right on the front. Naughty Dog threw this in as a nod to players of the first game. It then pays tribute to another classic – Jak X Combat Racing. Originally appearing in the first The Last of Us, it reminds us of one of Naughty Dog’s biggest triumphs on the PS2… which, of course, you can also play on PS4 these days. Alas, you still can’t play it in-game because, well, no power.

There are other things to keep an eye out for, too. There’s a person in the basement of the WLF Base that’s playing a PS Vita with Jak and Daxter: The Precursor Legacy on it (as part of the Jak and Daxter Collection). And what’s more, you’ll find a PlayStation 3 in Ellie’s house, complete with games like the first two Uncharted titles and, of course, Jak and Daxter. (What, no Way of the Warrior?!)

These are all cool things to look out for in the game, so sit back and enjoy The Last of Us Part II.
And make sure to check out our review if you haven’t already!