As you can see from our recently posted review, The Last of Us Part II is a remarkable achievement, and one of the best PlayStation 4 games ever made. It also tells an unconventional story that strays a little bit from the original, but for the better. (Deal with it, haters.). But when you play the game, there are some things that you will want to keep in mind. They will help you survive in the long run, especially when you’re going up against the worst of the Infected. We’ll have a more detailed guide in a few weeks, but here are some tips to help you along in the meantime…

Do NOT Play the Game Like a Traditional Shooter
If you’ve played the original The Last of Us or its Remastered edition, then you should know that this isn’t a typical action game. Your resources are limited to just a few bullets, although you can select between different guns if push comes to shove with the Infected and human enemies. (Which it will, we assure you.). 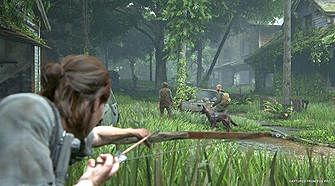 That said, we suggest not playing with a run and gun style. The Last of Us Part II is based upon survival, and you’ll want to make sure you pace yourself when it comes to taking on enemies. The first thing to take advantage of is stealth kills. You can sneak up on unsuspecting foes that don’t see you, take them down from behind or the side without alerting others. This is vital for surviving some parts of the game. Granted, sometimes the Infected will rush you and you’ll need to rely on firearms. But otherwise, save your resources and go for stealth kills.

If an enemy won’t turn around, try to use something in the environment to distract them, like a bottle or brick. You can probably even hit them and agitate them enough so they’re an easy target. Also, don’t hesitate to check drawers and dead bodies for resources. (Dina even suggests this a few times.) You could craft things like health kits and upgrades for your firearms that will really come in handy. If you see a highlighted circle, stop and take a look-see.

Don’t Be Afraid To Go With a Lighter Difficulty
The Last of Us Part II is hard on a higher difficulty setting. You’ll get brutalized unless you know exactly what you’re doing. With that in mind, if the game becomes too much of a struggle, you can adjust. There are other settings available, ones in which the enemies don’t put up much of a challenge and you can get more out of the story. And no, the game doesn’t punish you for taking a lighter route – the importance here is that you take in what’s happening.
Going with an easier setting will also get you more accustomed to the gameplay, including mastering stealth kills. Once you get the hang of it, you can bump up to a higher difficulty and take on the challenge that lies ahead. There’s nothing wrong with easing into it.

Stuck? Take a Good Look Around
The Last of Us Part II is chock full of some puzzles that you need to solve. This includes finding a way out from an otherwise inescapable room, or not knowing how to get into a building, like the courthouse you run into during your stop in Seattle. With that, get a good look around. Naughty Dog has done a compelling job with this game’s design; and with a little bit of exploration, you can get a good idea of where you need to go next. When it comes to solving puzzles, sometimes you have an ability that can help you out. For instance, activating the main gate in the bunker when you first get to Seattle. The station requires a power cable in order to juice it up and get the door opened, but the cable between the generator and the station is too short to wind around the fence. So…why not go over it? 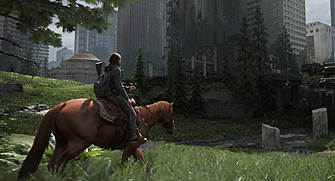 One useful ability within the game is the ability to throw a rope. This not only lets you access higher-up areas (like the higher floor in the church), but also lets you throw things over to reach something easier – like the power cable attached to the station. If you get too stuck, you can always click in the hint button when prompted. The game will give you a good idea of what you need to do in case you can’t entirely figure it out. These should help get you started. But again, we’ll have more details on a guide in a future post. Stay tuned, and enjoy The Last of Us Part II now on PlayStation 4.