Next month, gamers will be able to usher in a new generation of gaming with both the PlayStation 5 and Xbox Series X. But the real question is this – what sort of sports experiences can they expect from the consoles?
Thus far, two games appear to be ready for the spotlight once mid-November rolls around. EA Sports’ Madden NFL 21 and 2K Games’ NBA 2K21. Both should be ready in time for the release of each system, ushering in a new generation of play.
Though details on these next-gen versions of the games are light, we have an idea of what we can expect from each title. Let’s take a closer look.

Though first footage of the new Madden has yet to become available (we’ll likely see something in just about a couple of weeks, leading up to its release), one thing that’s sure to get the attention of players is the upgrade to visuals. The game already looks like a winner on Xbox One and PlayStation 4; so more than likely, we’ll see advanced player models, higher field details
and even smoother animation than ever before. Just remember what previous Madden titles did when they first came out for consoles and compare them to the prior generation – that should give you an idea of what’s in store.
The more important factor, however, is gameplay. With the trailer above, EA Sports talks about how players will get a better “feel” for the action. We’re not sure specifically what this means, but some additional features could take advantage of the Hap feedback, as well as Sony’s specific PlaySense features in its peripheral. Again, a video should be making the rounds soon that explains this a little further in detail, so players have an idea of just how much control they’ll be given.
As for other in-game modes and other goods, they should be carried over from the current-gen version that’s on the market. It’s unlikely we’ll see anything like Crossplay – at least, not yet – but Madden NFL 21 should be packed with enough content to keep players entertained.

Slam It Home With NBA

Meanwhile, not to be outdone with its product, 2K Sports has big things planned for NBA 2K21 when it launches next month.
Perhaps the first thing fans will notice are the graphics, as demonstrated in the trailer above. As you can see, players and coaches look more realistic than ever before; and the gameplay is fast and smooth when it comes to delivering dunks and powerhouse blocks on the basket. That, combined with the tried and true gameplay we’ve come to expect from the series, should keep basketball fans continuing to run to the basket. 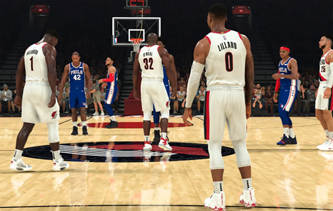 Aside from that, some gameplay features will be enhanced. Though 2K didn’t talk specifically about that, expect shooting, dribbling and passing to go through some slight changes to take advantage of the new controllers. Not that there will be a large upheaval, but it should make the game feel more at home.
That, combined with the many modes and online features, should make NBA 2K21 a huge treat.

Not Much Need For an Upgrade Cost
Finally, there’s the last factor to consider – you’ll be able to play both games either in current or next-gen.
EA Sports already made it clear that Madden NFL 21 will be eligible for a free upgrade from PS4 to PS5 and Xbox One to Xbox Series X, provided you buy the physical version of the game. (For some reason, digital isn’t going to work.) So you won’t have to worry about having to pay another $60 to get the ultimate experience.
And those of you that bought the special Kobe Bryant Mamba Edition of NBA 2K21 are already set to receive the PS5 or Xbox Series X edition for free, no matter which version you invest in.
That’s great news, as players don’t have to wait to dive in while the new version waits in the wings.
Hopefully we’ll see more sports games make the jump to next-gen consoles over 2021, including FIFA, NHL and a few others. For now, though, there will be more than enough football and basketball to go around. And that should suit system buyers just fine.