The Last Of Us Part II Review

The Best Sequel Of This Generation

It took what felt like an eternity to get produced and published since its initial announcement at PlayStation Experience (remember that?) back in 2016, but The Last of Us Part II is finally here. It marks Naughty Dog’s first game since Uncharted 4: A Thief’s End, and it’s a project that’s been in the works for just about six years. So, you can see every ounce of effort as the game unfolds, even if you’re doing something as simple as riding horseback through a lush forest. There are very few sequels that can match its caliber and its feeling. The storytelling and elegant design are really something else.

Ellie Is Back!
Without going too much into spoiler territory, the game follows the events that unfolded from the first. There’s still a lot of questioning going on, but Ellie has made a place for herself as part of a settlement. She’s also established a relationship with her friend Dina, which provides a rare arc of human storytelling we don’t see much in gaming. More of this, please! Needless to say, Ellie continues to fight for survival, not only against the Infected, but humans that are part of other groups. And in the midst of the story, a newcomer named Abby gets involved, though to what extent we won’t say. Let’s just say that she shakes the system to its very core, and once the shocks set in, they set in deep.

There’s still a moment within the game that we’re still angry over, even though we have moved well past it, progression wise. That is all we’re going to say about that. Naughty Dog has proven to be a true game developer over the years, moving past simplistic efforts like Way of the Warrior into a level of storytelling that’s spellbinding. You feel every gut punch that The Last of Us Part II delivers, and really feel Ellie’s growth over the course of the game. Even her love story with Dina is fantastic, haters be damned. It’s probably one of the most realistic love stories we’ve seen in a game. Granted, there’s still a lot of head-bashing going on, but it stays in the background and reminds you of everything that Ellie is going through.

The Controls Are Way Better
Moving on to the gameplay, The Last of Us Part II feels like an evolution from the first. Survival is still the name of the game here, but the raw emotion from taking on each battle and winning is something else. The combat is a tour-de-force, especially when you use stealth techniques to get the jump on unsuspecting foes. Every bit you saw in the trailers explodes on the screen, right down to the visceral finishers. And even the little things, like throwing ropes and cables around to get to new areas, feels natural and without fault. Also, we could horse ride all day. Eat your heart out, Red Dead Redemption II. What’s more, you can adapt the challenge any way you see fit. You can go for a lighter story and breeze through the game, or set it on the highest difficulty and truly prepare for the fight of your life. Resources come fairly easily, though you should not play this game like a typical shooter. It’s The Last of Us, not Call of Duty. Think with your head on straight and you’ll get the most from the experience. I do admit, I miss the multiplayer portion of the first game, though some may think that it felt tacked on. But this allows Naughty Dog to focus more on the single player experience, which provides greater reward down the road. Not to mention finally conquering it on the highest difficulty setting, which, we assure you, is not easy. Best of luck.

Wow, What a Looker. And Those Sounds!
Presentation-wise, this may be one of the most beautiful, if not the most, PlayStation 4 games to date. Every environment has something special, from the inner layers of Joel’s house to the sheer beauty of a ravaged Seattle. Yes, you can find beauty in a ravaged city, just wander around the countryside. The game has a smooth frame rate (not quite 60 FPS, but it works), and it never lets up on the details. Plus, I barely noticed any loading time to speak of, quite the feat considering all of what this game packs. Clearly Naughty Dog learnt a thing or two from Cory Barlog and the God of War team.

Also, let’s talk audio. Every bit of sound goodness you can imagine from this game comes through. From the atmospheric effects to the creepy sounds of the Infected, it’s wonderful ! And it’s all backed by the returning Gustavo Santaolalla, who continues to be a maestro with his simple yet outstanding score. The voice acting is on a level by itself, too. Ashley Johnson truly delivers as Ellie; and it’s great to hear Troy Baker again as Joel. Other noteworthy additions include Shannon Woodward as Dina and Laura Bailey, doing dazzling work as Abby. And then you get to Isaac, played masterfully by Jeffrey Wright. This cast is welcome in any game they want to do – hell, even Way of the Warrior. (Could you imagine?!)

You’ve Been Waiting For This, So Wait No Longer!
The Last of Us Part II sets an unmatchable standard when it comes to game sequels, even topping Naughty Dog’s previous efforts with Uncharted 4. Its level of quality is unbelievable; and its gameplay really feels like it’s kicked up a notch. It is not a game for everyone, especially those who aren’t into horror experiences or storytelling. But for those that stick it out – along with its brutal twists – you’ll find something that truly stands out in today’s game scene. Don’t miss out, because who knows how long it will be before we end up with a third chapter. Maybe 2027 beckons… 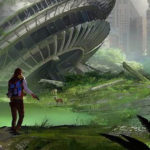