If the game industry has proven anything over the past few years, it’s that the art of the side-scrolling brawler is far from dead. Scott Pilgrim vs. the World came roaring back to the scene in just the right way; the Teenage Mutant Ninja Turtles saw an amazing revival through Shredder’s Revenge and the Cowabunga Collection; and Streets of Rage 4 proved that you can bring back a classic franchise on good terms.
So what’s next? Well, there’s room for all sorts of beat-em-up franchises to grow. Heck, done the right way, Capcom can even make Final Fight great again (as long as it’s not done like Streetwise). But, for today’s article, we want to focus on a forgotten Sega franchise in the Sega realm that needs a shot at redemption – Golden Axe.

Where Has the Golden Axe Gone?
From the late 80s through the mid-2000s, Golden Axe was one of Sega’s most appreciated franchises. It got its start in arcades before moving to the Sega Genesis, where it flourished with a number of sequels. (Of course, we can’t forget about the enjoyable Golden Axe Warrior on Sega Master System.)
As the franchise went on, some interesting choices were made, like with the fighting game Golden Axe: The Duel, as well as with the 2008 3D adventure game Golden Axe: Beast Rider – the last game in the franchise to see a release. But we still had some gems in there as well, like Golden Axe: The Revenge of Death Adder, which recently got its own Arcade1up release for collectors to enjoy.
But outside of that, we haven’t seen much on the Golden Axe front. Little nods here and there, like inclusions in the Sega Racing arcade titles…but hardly anything else. And, honestly, that’s a bit of a shame, since it’s one of the most iconic beat-em-ups out there.
So what can Sega do to bring it back? Well, we have a few ideas. 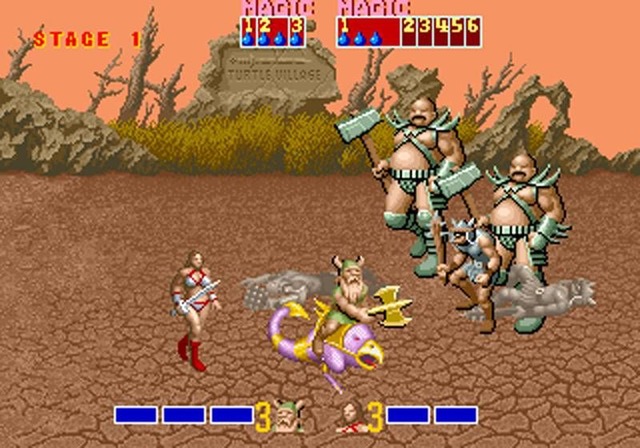 Remake or Sequel?
There are a few options available here when it comes to Golden Axe’s revival, but it has to be done the right way. By that, we mean not taking the route that came with the Sega Ages version that came out for PlayStation 2 years ago, which left a lot to be desired.
Instead, we could talk a full-blown remake, with a package deal that includes both the original as well as Revenge, because those are the two best games. (Wouldn’t hurt to throw Golden Axe II or III in there either, though.) There are lots of talented studios that can prove their worth with a side-scrolling brawler, including some truly great indie ones. So anyone could give Golden Axe a little bit of polish.
But instead of a remake…how about a sequel? Obviously Dotemu, working alongside Lizardcube and Guard Crush Games, made magic with Streets of Rage 4, finding that amazing balance between old and new. So…why couldn’t they do it again with Golden Axe V? (Technically, Death Adder is 4, though arguments could be made.) We’re talking a stylishly animated brawler with old and new enemies alike, along with tons of modes and co-op support. Wishful thinking? Perhaps. But Sega’s been talking about reviving franchises for some time, so why not add Golden Axe to the list?

An Axe To Grind
It’s frustrating to see Golden Axe treated the way it was, with the last entry in the series merely being a single player adventure that didn’t even come close to capturing the spirit of the original titles. That’s why it’s time for Sega to take things back to basics and give us a Golden Axe game that we can really grind our teeth on.
Indeed, the axe is in their court. Make it happen, guys!

We’re giving away a sweet new game console of your choice! Find out how to win here.