These guys know what make an RPG great.

I’ll never understand why Square Enix turns such a cold shoulder to the classic role-playing market. There’s a reason why games such as Secret of Mana and Chrono Trigger are held in higher regard than, say, Final Fantasy VII Remake. It’s because fans know what a classic role-playing adventure is when they see one.
And what’s more, it’s downright criminal that Squeenix hasn’t given these games a superb modern treatment. Sure, we did get a Secret of Mana re-release a while ago, but fans will tell you that it wasn’t quite the same with its glossed-over visuals and gameplay “refinements.”
That said, game developer Matthias Linda and the publishers at DECK13 get it. Rather than trying to revamp the RPG formula as we know it, Chained Echoes simply calls back to a simpler time, focusing on story, gameplay tactics and the kind of presentation that would be right at home on the SNES. As a result, it’s one of those late-in-the-year triumphs that will catch you completely by surprise – especially if Trigger and Mana were your bread and butter.

An Uneasy Truce
The game focuses on the country of Valandis, where three countries live under an uneasy truce following a catastrophic event that took place years prior. However, as expected in these kinds of games, something comes along to eventually tear the continent apart. It’s up to you and your fellow party members to make things right before things get out of hand.
That’s just a plainclothes way of discussing the plot, which is surprisingly detailed. In fact, Chained Echoes shows Linda’s ability to involve great character development and storytelling into a game such as this. It’s not without its wrinkles for sure, but for the most part it knows how to capture emotion. What’s more, it does so without really getting boring – and, yes, there are some fun moments as well. 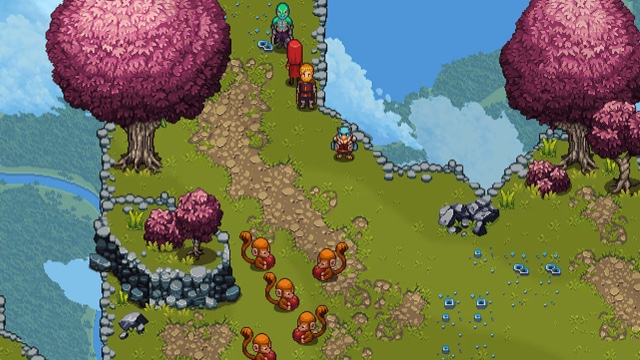 The story’s not all, however. The well-composed music harkens back to old-school times, with a soundtrack that Chrono Trigger fans would absolutely gush over. It sounds terrific, like
something processed from the SNES days, and it’s backed by superb sound effects that capture the heat of each battle.
But the real treat here? The visuals. This looks like an old-school RPG through and through, from the animations to the world settings to the battle system, which shines with each special attack. Some characters (like bosses) have better detail than others (like the heroes), but overall it’s a splendid looking game. Plus, there’s no question that Linda sure knows how to make a sunrise look dramatic. (Or is it a sunset? Hard to tell.)

A Lot To Do, With a Nice Battle System
Chained Echoes will take you some time to get through, mainly due to how the game is structured. Sure, you can complete your quests willy-nilly, but the real treat is finding cool stuff off-location, including treasure chests filled with goodies and caves with potential danger inside.
As for the battles themselves, they’re pretty epic and ripe with tactics. You can choose special attacks, and pile on what’s available to you depending on what lies ahead with each one.
What’s great is that, like older games before it, Chained Echoes rewards those that take the time to master battle tactics. You’ll thank us when your whole party survives against a rather tough skirmish. 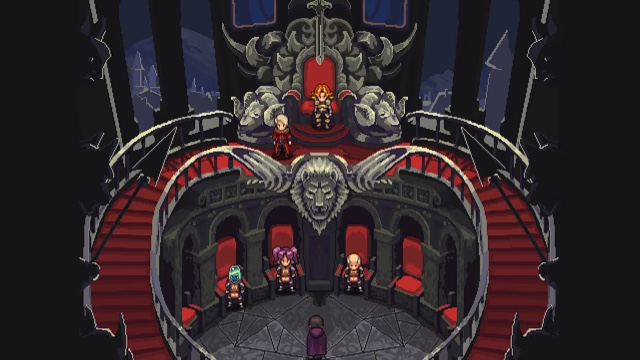 There are also unlockable rewards to uncover, which you can use to bolster your line-up of goods across a number of characters; and the pacing is about right as well, with events that keep you on your toes so that you don’t fall into the usual rut of “okay, let’s battle, and then let’s battle again.” Linda certainly knows how to put together an RPG format, and it really shows here.
But the real fun lies with special moves, like the Ultra Move and being able to go into Overdrive. These not only increase your arsenal, but also your power, as you really lay it on thick to enemies. Timing is everything, and it can take a bit to master. However, those that take the time to invest in these will really find them rewarding. You don’t want to just skimp through battles here – you want to indulge.
And keep in mind that this is coming from someone that’s not that hardcore into RPGs. Sure, I played games like Chrono Trigger in the past, but recent ones that have left me feeling a bit…cold? That’s not to say the genre hasn’t revolutionized. But games like Chained Echoes remind us that growth can be achieved while still reminding us where we come from. That’s a great trick in its own right.

Break the Chains
Unless you’re not a die-hard fan of RPGs or can’t really wrap your head around some of the storytelling conventions here, I can’t think of a reason why I wouldn’t recommend Chained
Echoes. It’s a truly impressive project that packs on deep gameplay, along with a fitting presentation right out of the SNES locker. It’s also got hours of stuff to do, and for a reasonable price of $25 (or less if you find it on sale). It’s one of the bigger surprises in this holiday season of games, and well worth your time if you grew up with the role-playing ventures of old. And if you didn’t, this could remind you of just how rad those days were.

The Bottom Line: This is role-playing goodness done right, and a reminder of a time that has since lost passed us. Chained Echoes is a real reward for fans of the genre.

Yep, we’re giving away a free game console of your choice! Find out how you can win here. 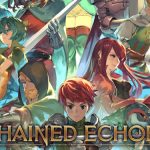