The problem with a lot of games these days is that they try to go for something more on the “service” level rather than telling a story. Granted, some of these titles do pretty well with this, but a lot of players these days just want to dig into a game for its story and action. There’s a reason why God of War: Ragnarök sold so significantly well in its first week, after all.
And that’s where Evil West pretty much “gets it.” It’s not trying to reimagine the Western landscape like the groundbreaking Red Dead Redemption and its sequel did. Instead, its goal is simple – allow your cowboy to kick ass and take names as they mow down the undead like they were grass.
Will it win any awards? Not likely. But will it entertain on a visceral level like the Doom games managed to do? Yessir.

Get To the West
The story isn’t the greatest out there, but it does put things in motion in the end of the 19th century, as your cowboy takes part in a battle where humans and vampires are at each other’s throats. But the vamps have a lot to their advantage, thanks to large behemoths ready to squash anything in their path and legions of the undead. Fortunately, you can fight back with your own little arsenal – a whole lot of weapons. 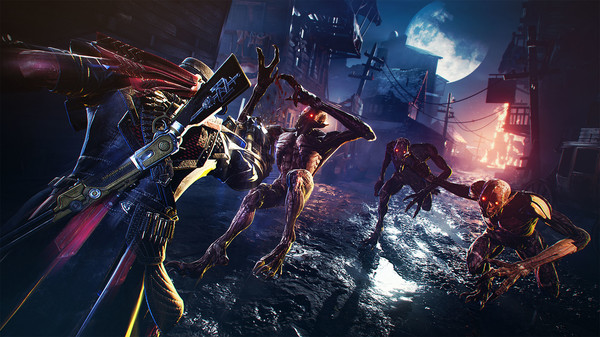 The game kicks off with some basics, including punching attacks and a pistol that, fortunately, has more of a cool-down rather than a need to have a bullet count. This is just the start, as you’ll also gain access to a shotgun and a ton of other weapons, as the enemies get bigger and badder. It’s got a pretty good progression scale, though it does take a bit longer to unlock the cool goods than we expected. Still, for those having a blast going through the game by themselves or with a friend, it’s time well spent.
We really enjoyed how nicely the co-op works, as you can log in with a friend and take on the campaign together. It’s well-structured and introduces some tactics you can work together on,
like shooting airborne enemies while someone else handles the ground ones, or systematically taking a boss apart. If you can find access to a friend that’s in the mood for a rootin’ tootin’ good time, by all means, enlist them.
As for the gameplay, it nails the basics beautifully. While there are some odd interactions here and there where something is done automatically, the rest handles so well. Shooting feels like a good second-nature tactic, and watching enemies crumble to sweet finishers is something else. The brawling tactics are fun as well. If anything, the aim can be a little off at times, but never to the point you’re not having fun with this.
Plus the game is long – and challenging – enough to be worth digging into, especially when it comes to finding additional cash and other little goodies. Needless to say, this Wild West definitely lets you cover a lot of ground.

Not a Bad Looker
While Evil West doesn’t quite push the boundaries of the theme like, say, Red Dead Redemption II did, it’s not a bad looking game at all. Like its Shadow Warrior games before it, the developers at Flying Wild Hog pack Evil West with stylish visuals, a bunch of gore, and some good, if slightly repetitive, environments. The animations are sharp and some of the visual directions are a bit inspired to boot. Plus there are options to get the most out of your game. Want beautiful 4K refined visuals? You got it. Prefer something with a performance boost where you run at 60 frames per second? 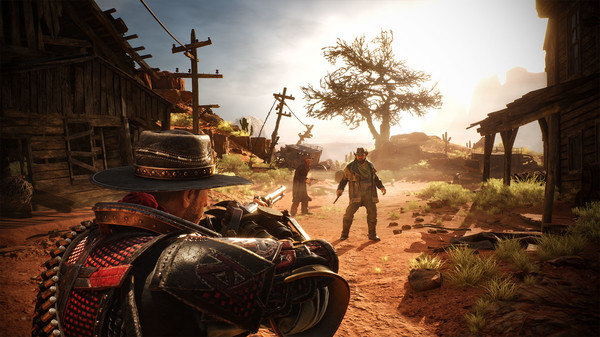 Yep, there’s that as well. The choice is yours.
Backing all this up is a solid Western score that, while not as majestic as other West-themed games, still fits the bill. There’s also satisfying “scrunch” blood effects for each of the enemies, along with a good amount of banter between your hero and the others. It’s not bad at all.

Ride Off Into the Sunrise
Again, don’t go expecting a game-changing experience with Evil West. Flying Wild Hog and Focus Entertainment didn’t set out to reinvent the genre. But the game accomplishes what it sets out to do with rousing action and a whole lot of bloodletting. And considering most games being in the state that they are, that’s not a bad experience to have in the least.
So go on, reach for your six-iron, and have a hoot and a holler in this old West. You’ll be glad you did.

The Bottom Line:
A neat little addition to the growing list of great games to play this holiday season, Evil West stands out as an adventurous title that will dig its claws right into you. And we mean in a good way.

Want a shiny new console to play Evil West on? We can certainly help with that! 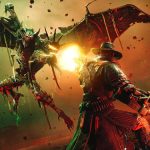