If you have a popular character and you’re going to try and break into video games, chances are you’ll probably try to fenagle them into a kart racing game. Whether it’s a guest character or someone with their own notable franchise, you can pretty much depend on them ending up behind the wheel at some point. We’ve seen it with a majority of Nintendo’s universe, as well as Sonic the Hedgehog, Crash Bandicoot, and others.
Now, thanks to Microids, we have the Smurfs getting all nice and blue behind the wheel with Smurfs Kart. It basically takes you through a number of locales you’d probably find in their village, using power-ups in the hopes of getting a first place win in either Fun (easy) or Hyperspeed (Hard) difficulty.
The game does feature a single player set of cups, along with split-screen multiplayer, so there’s more than enough to do here. But is Smurfs Kart worth bothering with when you already have the dominant Mario Kart 8 Deluxe ruling the race course? Well, it really depends on your fandom, but it’s better than we thought it’d be. 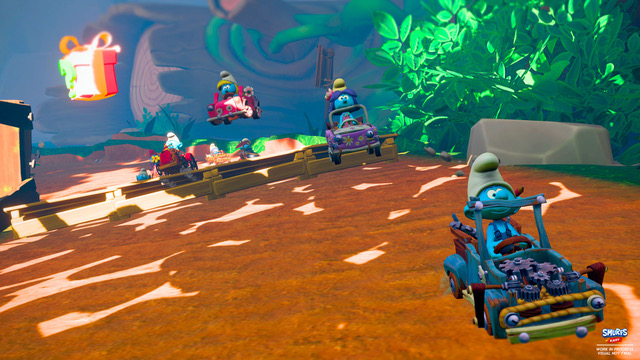 Imitation Is the Sincerest Form of Smurfery
When it comes to gameplay, you’ll notice a bit of familiarity with Smurfs Kart – especially if you’ve mastered Mario Kart. The drifting and acceleration system is about the same, though boosting is a little easily achieved here. Handling is also done pretty well, even though the game, at times, has a habit of automatically steering you away from an edge to avoid a collision. That’s great and all – unless you’re trying to avoid debris on-track. As for the power-ups, they’re themed with Smurfs in mind, including homing attacks, projectiles, and a weird flute thing where you can hypnotize other drivers and gain the lead. They’re effective, if not entirely original, and nice to pull off in a pinch. You can also pick up fruit to increase your maximum speed.
Okay, so the game “borrows” quite a bit from Mario Kart. But Smurfs Kart still pulls off solid controls for a knock-off; and the multiplayer is highly engaging with some buddies in tow. The only thing is the slight imbalance with the AI. Sometimes the first place driver can be a little too dominant up until the last second, regardless of which difficulty you select. That might frustrate rookies or young-ens that prefer an easy victory. Still, it’s not terribly bad, and they can enjoy the game alongside their siblings.

Not Bad On Visuals, But It Needed More Smurfy Racing Territory
Smurfs Kart doesn’t really provide a revolution in visuals, thanks to its 30 frames per second speed. However, it still looks pretty good, especially with its Peyo-inspired course design, its cute little animations, and its variety of drivers. Yeah, most of them are Smurfs, but they still bring some intuitive techniques to the game. Overall, it looks good, and runs pretty well in multiplayer too. 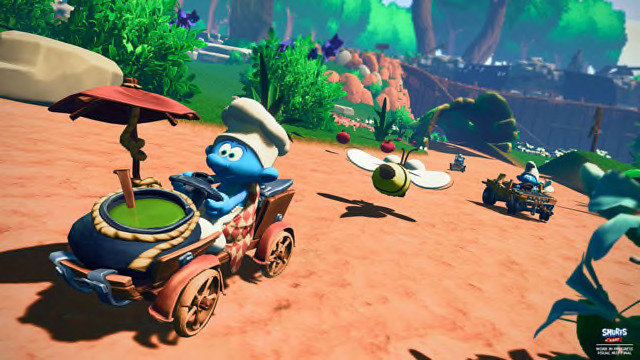 The big hang-up, however, is that there are only a handful of tracks. Like, 12 in all. Likely, we’ll see updates that add even more to the game, but it probably won’t take too long before you understand the terrain and master it within a matter of hours.
As for the audio, it’s okay. The music’s nothing worth writing home about, though it is upbeat and pleasant enough to fit into the Smurfs’ world. The sound effects are good, however, and the characters have enough personality for you to, ahem, Smurf by.

If You’re a Smurf Fan, Race To Your Heart’s Content
How much mileage (ahem) you get out of Smurfs Kart truly depends on how much of a fan you are. If they drive you crazy or you couldn’t stand them in your youth, there’s hardly anything that will convert you here. However, die-hard Smurf lovers or those that got to enjoy last year’s Mission Vileaf adventure will feel right at home here. It’s a pretty well designed game that makes up for its loss in tracks with a pretty solid frame rate and good single and multiplayer options. For a licensed title, that’s not bad to have.
So to Smurf or not to Smurf, that is the question. But if you choose to Smurf, it won’t leave you blue in the face.

Want a good console to play Smurfs Kart on? We can help with that, thanks to our holiday giveaway! 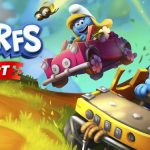