Hey, it sure beats the movie.

Remember the Garbage Pail Kids? They came out around the same time as the Cabbage Patch Kids, acting as an anti-hero for that particular brand. For years, these gross little toddlers enticed millions, even to the point they got their own live-action movie. (We’re still trying to figure that out.) And now, thanks to Megacat Studios, they’re back in a game inspired by the NES era. And don’t worry, it’s gross, too.
Garbage Pail Kids: Mad Mike & the Quest For Stale Gum acts as a reminder for the good ol’ days in gaming, doing away with microtransactions in favor of classic game design and fun 8-bit style visuals. But there’s more, including an abundance of extras that pay tribute to the brand without making you (too) sick to your stomach. If you’re a fan, you’ll want to dig in. But if you’re not, this might just convert you.

It’s Good Garbage
Developed by Tim Hartman (Haunted Halloween 86) and Greg Caldwell, the game focuses on a number of the Garbage Pail Kids (four, in fact) that venture on a quest of grossness. Each one has special abilities, like swinging swords or puking (yes, that’s an ability), and you can switch between the four at any time. This adds a good deal of strategy to the game, while sticking to its old-school roots.
It’s not amazing platforming by any means (Battletoads it ain’t), but it’s very well done for this sort of game. Jumping and special abilities are handled with ease; and there’s six levels that you can explore to your heart’s content. 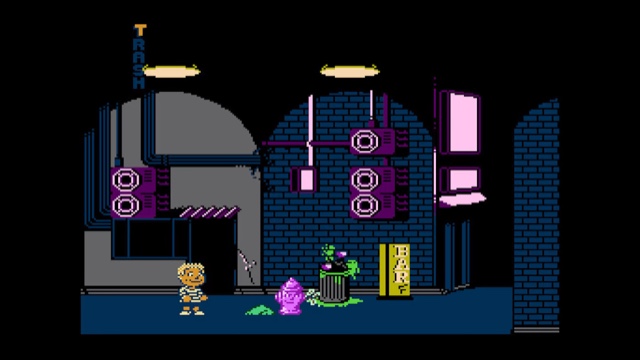 On top of that, there’s another aspect to explore – card collecting! Here, you can pick up cards like you could in the classic GPK days, complete with new abilities to assist you on your quest. Surprise, they’re just as oddball as your main characters, but that’s the point. You can’t expect normal kids here. And the extras are outstanding. You can play mini-games (like the weird toilet fishing game), check out a neat little movie that covers the history of Garbage Pail Kids, check out different options (like playing around with save states) and enjoying the character gallery. It’s pretty loaded for a $10 game, so be sure to dig in.

Not a Bad Looking Title – Mind the Puke
For a retro-inspired game, Garbage Pail Kids: Mad Mike and the Quest for Stale Gum looks pretty well done. It’s clear Hartman and Caldwell are inspired by the older design of games, as this looks like something from the NES era. (In fact, they produced an NES version if you feel so inclined to order it!) While there is flicker here and there and occasional visual problems, they’re never to the point you become annoyed. In fact, this game as a whole looks truly nostalgic and will take you back to the good ol’ days of gaming. (Someone want to grab me a Crystal Pepsi?)
The music’s pretty good too. Not amazing by any means, but it fits the motif of the 8-bit style. The sound effects are all right as well, though I don’t think we ever needed to hear what retro vomiting sounded like. (It’s…look, listen for yourself.)
Also, a shoutout to the story. It’s quite loyal to the lore of the GPK, and written by Adam F. Goldberg, who also created the show The Goldbergs. So, yeah, he gets 80s culture, and it truly shows here. 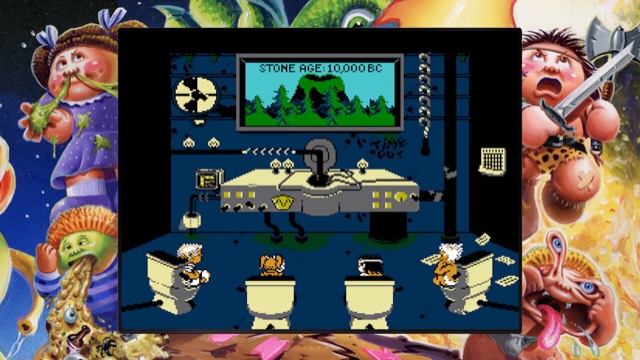 A (Fart) Blast From the Past
How much mileage you get out of Garbage Pail Kids: Mad Mike and the Quest for Stale Gum truly depends on how much you like the franchise as a whole. If it grossed you out then, it’s still about on that level here, especially with all the projectiles flying around. But it’s oozing (heh) with retro charm, full of unique gameplay, fun boss battles and lots of extras, including that cool documentary and collectible cards.
You owe it to yourself to have a good time with it – and for only $10, too. Make sure you add it to your collection before the Kids decide to drop off a copy of the live-action movie to your house. (No, really, they know where you live.)

The Bottom Line:
Garbage Pail Kids: Mad Mike and the Quest for Stale Gum has a tremendous amount of value for a $10 game, and is gross as you’d expect from the franchise. Plus the extras are really loaded here. Flick a ten spot at it like you would a booger!

Looking for a new game console for the holidays? What luck! You can win one of your choice from us! 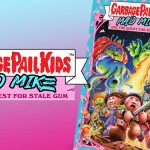