With the Success of Multiversus, Maybe Sony Should give PlayStation All-Stars Battle Royale Another Chance

We’re nearing the ten year anniversary of one of the most underappreciated beat-em-ups out there, PlayStation All Stars Battle Royale. Back in its heyday, it was a game that packed pretty much every Sony character under the sun – and a few third-party favorites – into a wild multiplayer beat-em-up akin to Super Smash Bros.
But for some reason, Sony just didn’t give the title much hype. And while it sold reasonably well, Sony would eventually leave the franchise behind for more serious affairs, like the forthcoming God of War Ragnarok.
Here’s an interesting question, however. With Multiversus doing incredibly well for the folks at Warner Bros., wouldn’t this be a golden opportunity for Sony to possibly revisit PlayStation All-Stars Battle Royale? I mean, some characters would have to be left out for licensing purposes, I’m sure. But the general guts of the game would remain and, really, doesn’t it deserve a second chance?
We think so, and here’s why.

Its Gameplay Isn’t Half Bad
Though you have to accept that only super moves can “knock out” opponents in the ring, PlayStation All Stars Battle Royale didn’t have bad gameplay in the least. In fact, all these years
later, it still feels surprisingly fresh.
The game’s developer, Superbot Entertainment, did a wonderful job keeping each of the characters balanced. Kratos from God of War kicked reasonable ass, of course; but so did Sackboy and, for that matter, Nathan Drake from Uncharted. Even the Fat Princess meant serious business – and she was a fat princess, folks.
Balance went a long way here, making each of the characters enduring and enjoyable. Not only that, but the DLC was impeccable. Though only four additional fighters were introduced, we got
such favorites as Kat from Gravity Rush and Isaac Clarke from Dead Space – both of whom kicked serious butt.
Not to mention re-launching the game with online play and some kind of free-to-play structure would not only give Sony a big hit to lean on for multiplayer fun, but also a nice bonus for the PlayStation Plus Essential service. It needs all the exclusives it can get; and this is a pretty big one, if we do say so ourselves. 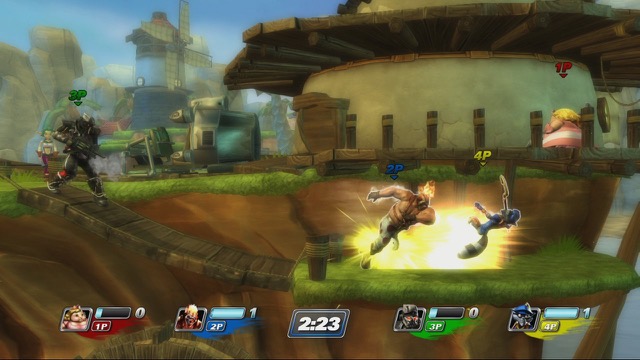 It’s Got Great Structure To Boot
There’s already an interesting Story Mode in Battle Royale that’s worth noting, as it seamlessly mixes up the story of all the characters and how they interact. Sure, it doesn’t use cut scenes to do it, but there are great voicework performances here, along with interesting character stills.
Plus you can finally ask the question, “What would happen if Sly Cooper picked a fight with Ratchet and Clank?” (Not to mention it’s great seeing Jak and Daxter once more.)
There’s also something cool about the stages, from the underground God of War arena to the awesome mixture of Heavenly Sword with the fast-paced speed of Wipeout. All that’s missing is a little Jet Moto, but we can’t complain.
In fact, one other cool aspect that could work in Battle Royale’s favor is adding new DLC. We’re talking new fighters relevant to the platform, such as Spider-Man (why not, Sony has a deal with him) and maybe even Aloy from Horizon Zero Dawn. For that matter, we could see promotional introductions like what Multiversus and even Fortnite does, perhaps even throwing in anime heroes.
Of course, this is all asking a bit much…but why not? Sony needs every win that it can get right now, and PlayStation All Stars Battle Royale wouldn’t be bad in the least.