We’ve seen Norse mythology represented in games before, but never in a game that combined first-person shooting with music/rhythm. In fact, that combination sounds like something out of the mind of a deviant trying to shake up the genre something fierce. Alas, that’s what we have with BPM: Bullets Per Minute.
Developed by Awe Interactive, the game puts you in the shoes of a Valkyrie fighting their way through Asgard and Helheim in an effort to overcome enemies. They do so through shooting various weapons. However, a heavy metal soundtrack plays in the background, and you have to kill enemies by following the rhythm with your shooting and reloading.
It’s a neat idea, and there’s some really cool stuff included with BPM, namely the soundtrack.
Alas, it doesn’t quite come together as smoothly as it should, and here’s why.

What’s With the Visuals?
The first thing you’ll notice about the Nintendo Switch port of BPM is just how browned out it appears. No, seriously. The game as a whole has a “dark red” theme going for it and barely shakes out of that. We suppose that’s just the setting that the developers had in mind, but it also means a very muddy appearance stays with the game throughout. That can make it hard to see certain enemies, or even figure out the way forward in some cases. Alas, the developers did what they could with the port, but some smoothing out – and maybe slight changes in décor – wouldn’t have been the worst thing.
This is made up for with a wicked good soundtrack. It may not quite be on the level of the Doom games, but it’s damn close. The hard rock tunes are an absolute pleasure to listen to, and drown out the otherwise miniscule sound effects that the creatures possess. Some more personality could’ve gone a long way here. Still, download the songs if you can. 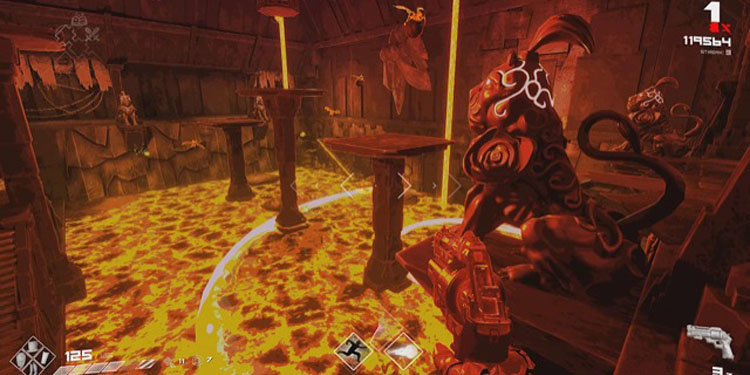 The Problem With BPM’s Gameplay
There’s a neat trick with BPM’s control scheme, as you time your shots and reloading to a song in an effort to stay in one piece throughout each level. But that idea doesn’t quite come to fruition as much as we had hoped.
The first problem is that BPM is just too damn hard. You die in practically four hits, which means that if you run into a group of enemies the wrong way, you’re dead on the spot. That’s it. No armor pick-ups, no last chance recovery, you’re just one dead Valkyrie. And considering you have to follow the rhythm gameplay so closely (in default settings), it can be a real headache.
Now, you can change things so that you make BPM a more traditional shooter, which does make it a little more fun. But it kind of defeats the purpose of the game’s existence. What remains is just another shooter trying to live up to the standards of Dusk and Doom, but coming up short because of those all-too-muddy visuals and the lacking enemy design. Only the bosses truly stand out here.
There are some cool additional characters with gameplay quirks, as well as new weapons you can use over the course of the game. But eventually, it just feels like it wears out the player instead of keeping them motivated to play. It would’ve been nice to have a little more forgiveness here; or, at the very least, given us a Valkyrie that doesn’t die so quickly from mere enemy scratches. 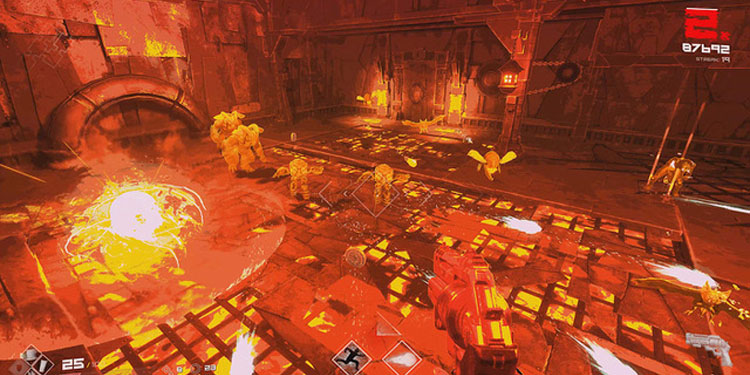 BPM Is Alright, But It Could’ve Been Better
In the end, BPM: Bullets Per Minute has a splendid idea in its head; and the music just can’t be beat if you’re into that sort of thing. Alas, with its poor difficulty balancing, its frustrating gameplay aspects and its reddened-out visuals, it just doesn’t have what it takes to keep up with execution. This should’ve been a very cool hellscape. Instead, it just feels like hell.

The Bottom Line:
BPM: Bullets Per Minute could’ve benefited from better development time and more fair gameplay options. Without these, it’s a tough little shooter that will only appeal to a select few. Shame, because the soundtrack rawks. 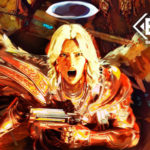