An indie goes into overdrive.

Several years ago, the team at The One Man Army Game Studio unleashed Overdriven on Xbox Live Indie Marketplace, and created a wondrous little “shmup” in the process. Since then, all’s
been quiet on the development front; but now the team has released a port of Overdriven on the Nintendo Switch, with the name Overdriven Evolution. Of course, it makes sense given how much it’s grown since its early indie days.
While it lacks the sort of polish to keep up with the superior competition that Cave and Taito make, that doesn’t deter Overdriven Evolution in the least. This one’s a lot of fun; and a creative puzzle element keeps things interesting when you’re trying to dodge bullets like crazy. Not to mention it has a neat gameplay mechanic that provides you more firepower – for a price. 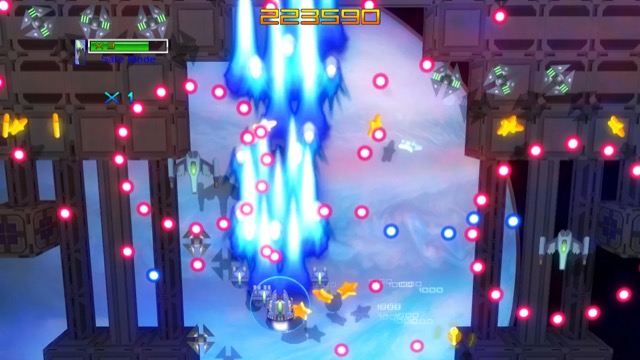 Lock and Load
Overdriven pits you against an emperor who unleashes his nefarious space forces on you. Luckily, you’ve got a ship with two different types of firepower. There’s general bullets, which get the job done but aren’t the most powerful thing in the world; and there’s a continuous space beam, which grants extra power but also knocks down your shielding and speed significantly.
No matter what you choose, it’s a neat gameplay idea. But there’s more to it as well. You can change your ships across four different colors, as there will be various types of bullets coming your way. As you change, you can become more successful dodging certain kinds of bullets, though you’re also in danger from others. It’s similar to what Treasure tried to do with Ikaruga, but with puzzle elements involving a “match-3” style of play to get orbs out of your way. This can lead to paths with more power-ups or evading certain enemies, which is a nice touch.
The difficulty can vary, with four different settings available; and the game also features local co-op support, though things get very chaotic with the bullet arrays. That said, this one’s a lot more fun and in-depth than you might expect it to be. 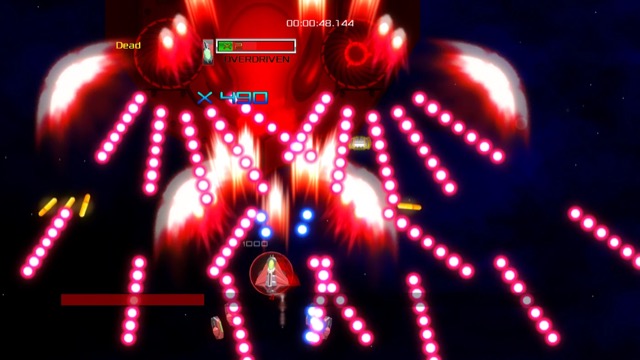 Not a Bad Looking Shooter
Again, you can tell that Overdriven Evolution has an “indie” approach with its design. But that’s not a bad thing. The One Man Army knows how to evoke spirit from a “shmup” title, and it shows here. The ship design, enemy variation and even the settings in each stage are inspired, and run pretty smoothly, even when things get, ahem, overloaded with multiple characters on-screen. It also looks good on the Switch portable screen, though a bigger TV is best suggested for this venture.
As for the sound, it’s all right. The music’s not amazing, but it’s not bad either; and the other little effects are noteworthy, similar to what you might hear from other entries in this genre.
Not bad at all.

Overdrive It To Your Library
There may be better “shmups” you’re tempted to choose from for the $14.99 range. But Overdriven Evolution will likely win you over with its unique gameplay and challenging settings, not to mention its neat little “indie” style presentation. It may not be top-tier like the others, but it’s a noteworthy addition to your game library, especially if you’re a fan of this sort of game.

The Bottom Line:
Overdriven: Evolution makes a fine transition from the Xbox Live indie front to Nintendo Switch, and here’s hoping we see more action from this series fairly soon. 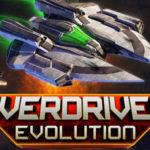