This is a shell of a good collection.

by Classic Steve
in Retro Games

Just mere weeks after we were wowed by Teenage Mutant Ninja Turtles: Shredder’s Revenge, Konami creates a “shell” of a follow-up act with the wonderful retro collection Teenage Mutant Ninja Turtles: The Cowabunga Collection. It’s just about everything you’d want in a retrofied Turtles collection, save for some very minor things that shouldn’t get in the way of a purchase.
This is essentially a compilation of 13 classic games featuring the heroes in a halfshell, from the “classic” NES game (we say that because of the underwater level) all the way through the Game Boy games and even the arcade titles. Of course, there are some rare gems as well, like Hyperstone Heist from the Genesis days and all versions of TMNT: Tournament Fighters – even the NES ones!
Digital Eclipse did their homework on this one, so let’s talk about why this collection simply rules. 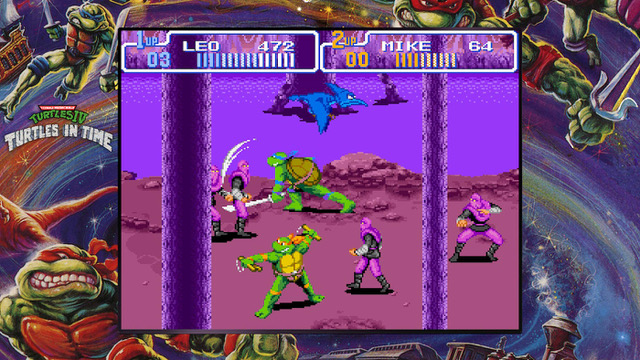 Not a Half-Shelled Set-Up
Not all 13 games in Cowabunga Collection are winners. The Genesis version of Tournament Fighters leaves a lot to be desired; some of the Game Boy games are a bit ugly blown up on the big-screen; and, of course, the original Turtles NES game is, well, what it is. But I admire the fact that there’s more winners here than losers.
Hyperstone Heist is a terrific brawler that stands along the ports of the original arcade game and Turtles In Time, thanks to its smooth gameplay and sharp visuals. And Tournament Fighters is worth the rediscovery on the SNES, as well as on the NES, since that version is incredibly tough to come by.
And of course, the arcade brawlers and following NES games (including Manhattan Project) are a triumph, and offer local co-op (and, in some cases, online) so friends can jump in and join the fun.
Overall, this is a good collection of games. And they’re backed by some tremendous extras. These include a bevy of options such as rewind, save states, strategy guides (with Nintendo Power inspiration), the ability to “watch” a master play the game and then jump in at any time to take control (!), and even a gallery with classic artwork.
And as I mentioned, some titles have online play – but not all. Granted, they’re the titles that count, including Hyperstone, SNES Tournament and the arcade games. It’s not like you wanted to hear someone curse out TMNT on NES anyway, so this is okay. That said, the service, despite using sharp network code, can be a little spotty. Hopefully Konami will patch that soon. 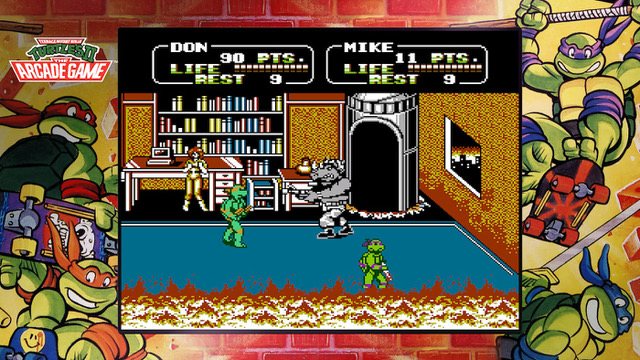 Now That’s a Swell Looking Bunch of Turtles
Cowabunga Collection also greatly benefits from damn near perfect emulation by Digital Eclipse. These games look and sound like their classic counterparts, save for the odd removal of Pizza Hut advertisements. No matter. The animations, backdrops and all the other components of the game are excellent; and the wallpapers are worth looking at as well.
The music in each game (save for some, like Genesis Tournament) is excellent too, and you can listen to your favorites on a devoted player, complete with little cassette tapes. Gnarly!
Finally, there are other options to tweak. Want the slowdown and flicker in the NES games to go away? One option and it’s done. Want to try the Japanese version of TMNT II: The Arcade
Game from the NES days to enjoy an easier setting? Again, one little option and you’re ready to go. It’s amazing how much is in this collection.
In fact, the only thing really missing are some of the games. We’re talking the okay GameCube/PS2/Xbox titles that some people enjoyed, as well as Ubisoft’s Turtles In Time: Reshelled. But…considering the lack of quality in that “revision” anyway, maybe it’s not the worst thing in the world that it’s not here. Stick with the classics. 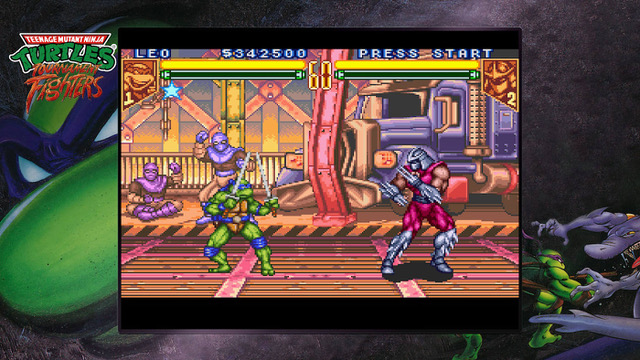 Cowabunga Says It All!
In the end, Cowabunga Collection sets a gold standard for how retro collections should be done. Even if all the games aren’t winners (and some lack online play), the majority of the compilation is outstanding. What’s more, Digital Eclipse has added enough options to keep you busy until the next big Turtles game arrives. And maybe even past that.
Seriously, if you don’t pick this up for yourself, your kids and your friends, you might leave some people feeling, well, shell-shocked. Don’t miss it.

The Bottom Line
And here we thought Shredder’s Revenge would be the only bit of good TMNT goodness we’d be getting this year. Cowabunga Collection is an absolute must-own. Konami’s on a roll. Now then…how about a Gradius collection? 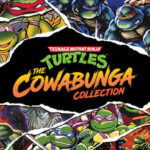