The world belongs to the Saints yet again.

I’ve been reading several reviews of Saints Row, and they’re all over the place. Some people believe that the game is an irredeemable mess with its glitches and “driving issues;” others have a problem with the characters being “out of whack” compared to ones from Saints Row The Third. And some believe it’s just a “woke” nightmare.
Us? Well, we’ve been foraging through this new world for several days and, honestly, we don’t get the hate. Saints Row reverts back to the ridiculous, fun style that we’ve come to expect from the series since Volition and THQ started it years ago. And while it may not be the captivating effort that Saints Row The Third was (the pinnacle of the series, we believe), it’s still a fun romp – and that’s exactly what fans need at the moment.
Perfect? Hardly. But a good time? Yepper.

A New Place For the Saints
Instead of the usual high-life downtown area that the Saints usually reside in, this reboot takes place in Santo Ileso, a Western sort of town that’s got dust everywhere – not to mention its own batch of criminal groups and super-soldiers. Known as “The Boss,” your character’s job is to build up the Saints, working with a close group of friends – a mechanic/driver, a business entrepreneur and a heist specialist – to begin that legacy.
What follows is a raid across nine different parts of the city, dealing with gangs, criminals and other types as you slowly build up your repertoire. It’s similar to the format of previous efforts, but Volition knows this territory best. What’s more, having fresh blood and a new setting isn’t the worst thing. In fact, it serves as a prequel of sorts, giving you all sorts of wild new stuff to do, from engaging in a Mad Max: Fury Road style ambush to doing a Fast Five style heist with a large container that you can use like a wrecking ball. Good stuff, Maynard. I didn’t notice that many problems with the gameplay at all. Do things get repetitive during shootouts? Slightly, but the chaotic, fun nature of the missions keep things fresh, along with the new characters you deal with. The driving isn’t nearly as flawed as some say, as I had no trouble performing precision drifts and engaging with a sweet new “ramming” feature that lets you “take out” enemies before they can reach you. There are some slow sections of the game – like in your hub – but overall the tempo and gameplay is about right for this. 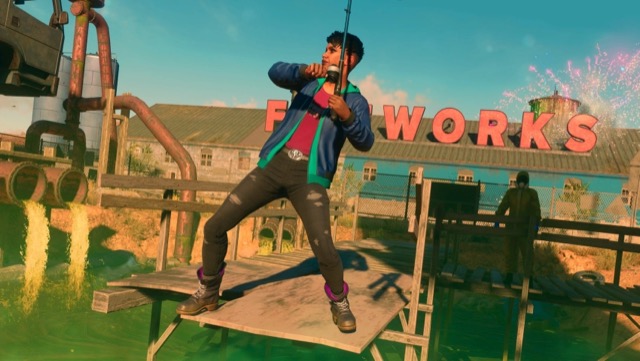 This World’s Worth Romping Around In
I’m also a fan of the soundtrack, with different radio stations offering old school rap, pop and other tunes. It’s not the best gathering of music out there, but there’s good diversity. Throw in some fun character voices (you can actually change your dialect in the robust customization menu) and it’s a blast for the ears.
As for the graphics, there’s one question that a lot of people are sure to ask. Do the glitches get in the way?
I didn’t notice many in the Xbox Series S/X version I played, but your version might vary. But overall, it’s a swell looking version of a new Saints World, backed by solid frame rate (on the X, anyway) and some good light and dust details. Your mileage may vary depending on hardware, like with Xbox One and PS4, but I really didn’t notice too much to complain about. (Then again, we have seen YouTube videos with some crazy stuff, so we’ll let some people keep their complaints here.)
There’s also miles of terrain to cover, and it’s impressive how well Volition’s damage engine works. Things blow up really nicely here, and there’s lots of collectibles, secrets and side hustles to find, which in turn can help you build your empire even further. Saints Row has no shortage of stuff to do; and the fact you can do it alongside a friend in nearly seamless co-op is awesome, to say the least. 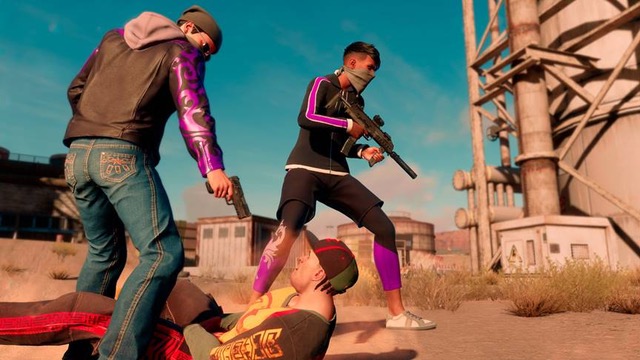 Head On Back To the Row
Of course, how you accept Saints Row really depends on a few things. Are you a fan of the series? Can you stomach the online hate that it’s getting and have a good time with it? Want to ride around on a motorcycle without wearing any clothing? (Yes, that’s the customization engine for you, as you can go starkers.)
If you can enjoy the party this brings, you’ll have a good time with this rebooted Row. It’s got miles of good times ahead, and despite its small glitches here and there and repetitive nature, it keeps the momentum of the series moving forward. Sometimes that’s just enough to plow through the hate and keep on keeping on.

The Bottom Line:
Forget the haters out there that want to bring this series down. Saints Row is packed with next-level fun, especially on the Xbox Series and PlayStation 5 consoles. Dig in. 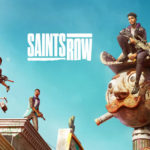