When you play through a golf game, usually you follow through the motions. Swing for a hole, get the ball in said hole, then move on to the next. Some, like Mario Golf: Super Rush, have distinct touches that stand out. But, for the most part, they follow basic principles. Well, unless they’re Cursed To Golf.
The latest from Thunderful is a humorous little golf-romp, a side-view 2D affair where you play a golfer forced to play through the afterlife in the hopes of getting to a better world. But he’ll have to face some odd characters and circumstances along the way, completing course after course within the allotted shot counter. If he doesn’t, well, he starts all over again.
It sounds tiresome, but Cursed To Golf is done with just the right level of charm. That’s not to say it’s the ultimate golf experience, but it stands out in a field of sim clones and arcade titles.
And that’s saying something.

The Strategic Game
The goal of Cursed To Golf is to get the ball in the hole in the allowed shot frame. Otherwise, you’re dragged back to the beginning to start again. At first, the principles are explained, as well as tools to the trade. These include Ace Cards, which can add shots, dynamics and other neat effects to help you get closer to the hole. You’ve also got three general clubs – driver, iron and wedge – with different effects depending on what you want to do.
The tutorial gives you a good idea of how the game works, but it’s applying them to increasingly difficult holes that makes the game so fun. There’s more than one way around; and you can also find trophies that can add extra shots to your meter so you don’t run out so quickly. The end result is a challenging yet entertaining roguelite with lots of neat elements and surprises.
Not to mention the side characters provide a lot of humor to the affair – more than you’d usually find in a golf game. That makes Cursed To Golf more charming than you may expect. 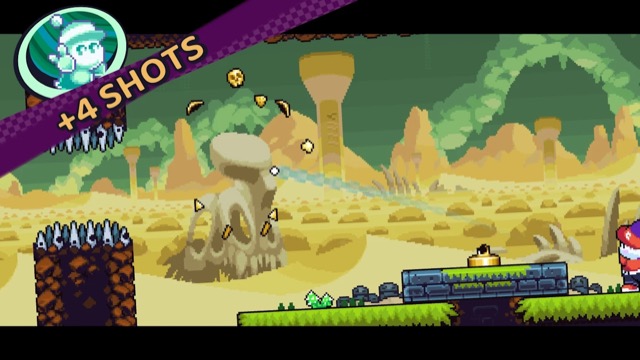 A Swell Looking Retro Title
Cursed To Golf looks like something out of the classic gaming era, but with some modern touches. The visual effects are really cool, as you and your fellow spectres have lots of personality to spare. Not to mention the ever-changing environments and cool hazards – including a surprising amount of TNT blocks – that you have to overcome. It all makes for a great looking game. Not to mention the Birdie’s Eye view, which only lasts a short amount of time, is useful when it comes to figuring out where the heck the hole is.
As for the music, it’s pretty good as well, though it tends to repeat more often than it should. A mixture of different music types would’ve been welcome here, along with some character voice effects. At least the sound FX are worthwhile, really adding to the overall retro mood of the game. 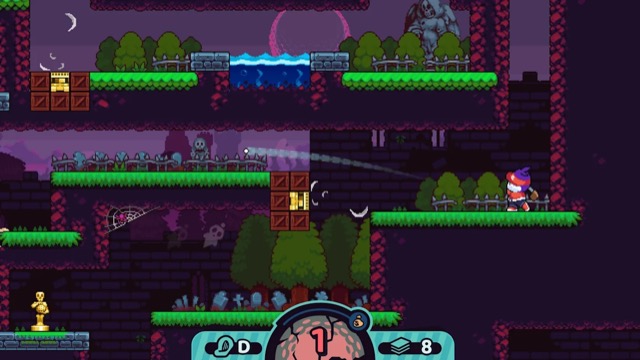 Swing Away!
Even with its repetitive tunes and the fact it’ll take you a few tries to get through certain holes, Cursed To Golf will easily win over both strategy players and golfers alike – and it’ll have a lot to offer to casual players too. The difficult yet fair gameplay has a lot of hook to it; and the visuals are a delight to look at. Not to mention that it’ll take you a while to soak in all the challenges and enjoy the humorous dialogue. Most golf games tend to drag, but Cursed To Golf sure knows how to play an enjoyable long game.

The Bottom Line:
Not your typical golf affair, Cursed To Golf benefits from exquisite design, humorous characters and joyous visuals. 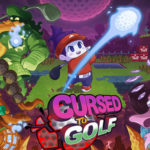