When I was a kid, I dreamed of owning my own arcade. I worked on everything from a custom playlist (“Relax” by Frankie Goes To Hollywood included), game placement, size, wallpaper, everything. Alas, that dream never came to be, but now I have the next best thing – Nosebleed Interactive’s Arcade Paradise.
While it’s not quite a dream come true with its arcade simulation dreams, there’s more than enough to keep you entertained here as you turn a simple laundromat into something much greater. And what’s more, there’s enough good games to keep you coming back for more, as well as a progression cycle that rewards you for sticking things out. That definitely sounds like Paradise to us.

Gone To the Washers
The game puts you in control of a kid who’s been tasked to run his father’s laundromat. But not content on just letting the washers and dryers have fun, you intend to create the ultimate game room. Alas, you must also keep running the laundromat as is, but this creates a fun business cycle in which you keep both things going at once.
It does take a bit for Arcade Paradise to get started, as you’re stuck with some remedial tasks and only a few games. But keep digging and the real treasure soon becomes unearthed, with even more games and that awesome progression cycle.
What’s great is that you can play these games however you see fit, and they’re fun in their own right. Obviously real arcade games couldn’t be used because of licensing and such. However, Nosebleed has created some great one-off titles that resemble some of our favorites, such as the nifty OutRun-esque Spacerace and a cool air hockey/Pong-type game. There’s a variety here, and however you move things around is up to you.
With the many options available – and that rad progression cycle that rewards you the deeper you go – Arcade Paradise has surprising depth. If you can put up with the tiresome mini-game tasks you have to complete to keep things running, you’ll find lots of rewards to reap. 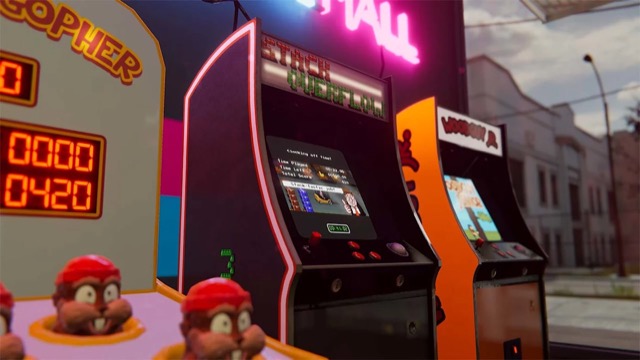 A Swell Looking Time
Along with a solid continuance of stuff to do, people to contact and more, Arcade Paradise also rewards with some great presentation. While the laundromat itself isn’t exactly a hot mess to look at, the arcade games are swell, representing their real-life counterparts, right down to CRT options and more. They’re great to watch, and some are even inspired by certain eras, like the PlayStation-style DDR dancing game that will challenge you at every turn. I just wish the office didn’t look so drab – but, hey, it is the peak of arcade time.
On top of that, there’s a surprising amount of inspired music, too. You can buy a jukebox and really unlock some great variety here, adding new CD’s with a nice mix of rock and techno to keep things moving. The sound effects are good too; and the voice acting, while somewhat minimal, is absolutely inspired. Everything about this game screams “SIM!”, but in the best way possible. 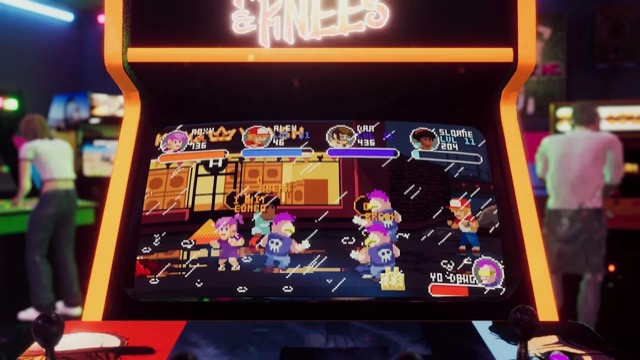 Open Up the Arcade
Despite some of its simulation elements and certain interaction limitations, Arcade Paradise is a dream come true for many. Its business tactics are well utilized, and its progression will keep you busy, even past operating hours. There’s a ton to unlock here, as well as new music CD’s to pick up, friends to talk to, and other stuff. Maybe unclogging the toilet isn’t your favorite thing in the world, but almost everything else about Arcade Paradise makes it well worth the quarters.

The Bottom Line
A surprisingly in-depth sim with lots of heart and replayability, Arcade Paradise might just be the time machine you’ve been looking for. 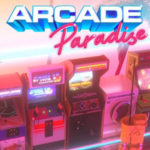