Turrican? Sure, you can.

So, anyone who grew up with an Amiga – or even a SNES or Sega Genesis – will likely remember the name Turrican. Aside from Contra, this series defined run-and-gun from the 80s and beyond, with Factor 5 taking over at a crucial time and introducing key entries that everyone could enjoy. Alas, aside from the sweet but somewhat light Turrican Flashback, there wasn’t any way to enjoy these titles.
But now, with the Turrican Anthology Vol. 1 and Vol. 2, there is. Nearly all of the classic Turrican games are included here (aside from the scrapped NES Super Turrican port), and while its price is questionable ($70 for both games), you get tremendous retro value here.
Let’s break down each of the entries, as well as their features and treatment overall.

Turrican Anthology Vol. 1
First up, there’s the first collection, which features Turrican and Turrican 2 from the Amiga era, along with two versions of Super Turrican from the SNES era and Mega Turrican Score Attack, a variation of the Genesis game we’ll get to in the second collection. These seem a bit out of order, as Score Attack could’ve easily been replaced by Super Turrican 2.
Nevertheless, ININ Games gives these games the proper treatment. The original Turrican games from the Amiga era are a pleasure to re-play; and Super Turrican stands as one of the underrated triumphs from the SNES era. As for the Score Attack variation, it’s not bad, but, honestly, it might just be passed over for the main entries.
ININ did a superb job with each game, with proper coding that match up to each classic entry, along with neat features like rewind and visual modes to choose from. It’s pretty cool, and a continued staple that the company uses. I hope it sticks around for future releases. 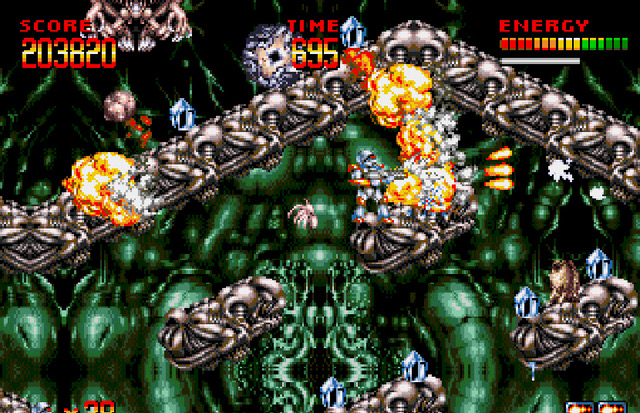 Turrican Anthology Vol. 2
Out of the two releases, Vol. 2 may be my favorite Turrican collection. It features some splendid games, including the awesome (and equally underrated) Super Turrican 2 from the SNES era, as well as the hit Mega Turrican for the Sega Genesis and its Amiga port, Turrican 3, which are pretty much the same game. (Still fun to play, though.) Rounding out the package is another score mode for Super Turrican (again, would’ve been better on the first package) and Mega Turrican: Director’s Cut, which has some minor changes from the first release.
It’s not a bad little collection in the least, and, again, ININ packed the games with the same original code as the first releases. But, still, it would’ve been nice to have these sorted into one compilation or, at the very least, some $20 packages. Nevertheless, Turrican fans will feel right at home. And the extras that were included with the first game are included in the second, with nothing really missing.
The gameplay overall for the games holds up nicely, but Super Turrican 2 is the best of the bunch, thanks to its challenging set-up and its awesome sub-stages, including a tribute to the classic Moon Patrol. You old schoolers will feel right at home here. 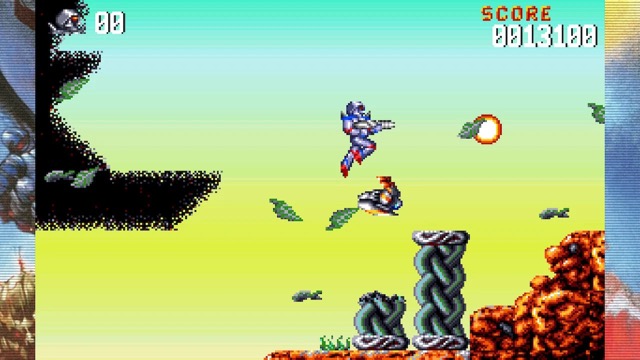 Pricey, But Worth It For Retro Fans
If you can get past the fact that the full collection runs way higher than Turrican Flashback, you’ll be right at home with the Turrican Anthology. Its two volumes cover quite a bit of ground with just a handful of games; and the extras are fun and worth playing around with. Plus, you get to re-discover favorites like Super Turrican 2 and Mega Turrican, which are selling for top-dollar on eBay in their original form.
It could’ve been better (and, again, where’s that NES game?), but it also could’ve been far worse. This collection will feel right at home with your Turrican fans.

The Bottom Line: Its price tag is hefty, but fans of the classic Turrican series should find both of these Anthology titles a welcome addition to their game library. 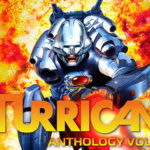