Inti Creates, and we appreciate.

Anytime that Inti Creates puts together a new game, it’s always some sort of means for celebration. Whether we’re enjoying the Castlevania-esque Bloodstained: Curse of the Moon games or something of the Gunvolt variety, there’s always something delightfully old-school about them. And, thankfully, Azure Striker Gunvolt 3 doesn’t change course from this. In fact, this may be one of our favorite games from them yet.
Instead of focusing on the same old heroes, we get a new one this time around – Kirin. Gunvolt still shows up for some action, but Kirin is the focus, and rightfully so. And while the story isn’t exactly electric all the time, the exciting platforming action, thankfully, is. Let’s dive right in! 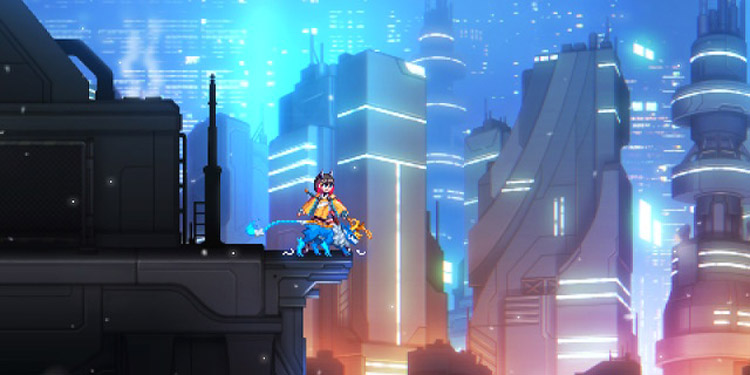 A Twist To the Gameplay
As with before, Azure Striker Gunvolt 3 once again features a chaining system for attack. But there’s a slight twist with Kirin, as you throw these talismans that drain enemies of energy while you move in for the kill with awesome sword slashes. It’s kinetic and absolutely exciting, especially as you get the hang of the system and really start building up those combos. It’s also exhilarating and challenging with the boss battles, as they simply don’t stand there and take your beating. No, sir.
There’s also a swift dodge technique to use, along with being able to use Gunvolt to try and clean house with wickedly powerful attacks. And, as usual, his homing lightning attacks continue to be right on point. Being able to swap out with him in timely fashion is very cool, though you’ll likely become attached to Kirin as time goes on.
All this ties into a gameplay system that works really well. Sometimes the challenge can be a bit much for newbies, but overall it’s easy to adapt to; and the more you get used to it, the better off you’ll do overall. It’s also great to pick up new abilities and see what kind of high scores you can get across each stage. So, you know, an old-school challenge.

A Sweet Retro Adventure
On top of gameplay that holds up to the typical Mega Man-style difficulty setting, Azure Striker Gunvolt 3 also wins with its presentation. Inti Creates installs its best retro style it can into the game, and it shows. Sometimes things can be a bit too chaotic, sure; but the visuals themselves are dazzling to watch and explode on the screen like fireworks. For that matter, the animations are sharp and the level design is impeccable, right up Inti Creates’ alley.
On top of that, I’m a big fan of the music. Great dance-style and battle tunes play throughout in the background, backed by traditional Japanese sound effects that feel right at home in Inti’s world. You’d best get a pair of headphones for this one. Again, thank me later. 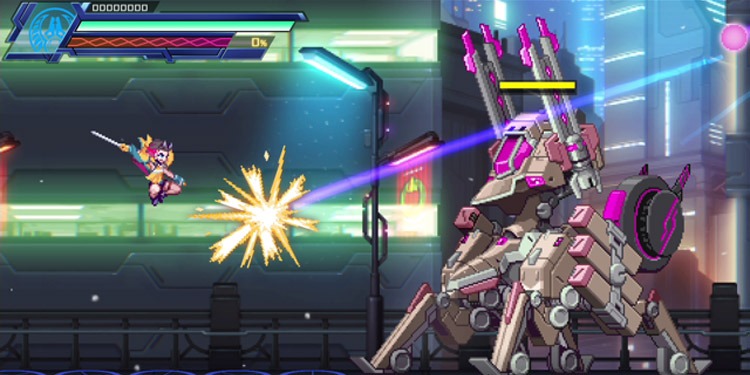 Azure Thing
Just like the games before it, Azure Striker Gunvolt 3 poses a formidable challenge that, for the daring many ready to take it on, will be a real treat. It looks and plays wonderfully; and the sound is terrific too, especially the tunes. The difficulty might be a bit much for some, but, for everyone else, this is, ahem, Azure thing.

The Bottom Line:
If you like any of the previously released Gunvolt games or just need something out of the old-school, this game is a must-own. 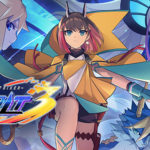