Spray your worries away.

Considering that everything from surgeons to chefs are getting their own games these days anyway, why not the glorious washer? That’s right, someone with a fine pressure hose can easily clean away dirt like a pro, and it makes for a rather interesting concept with a game.
Thus, PowerWash Simulator is born.
Like Lawn Mowing Simulator before it, PowerWash gives you one task and lets you complete it however you damn well please – cleaning up some of the dirtiest territory you’ve ever seen in a game. No, seriously. There’s a house with dirt everywhere, a playground that has seen better days, and other things just begging for a spray down. Fortunately, you’ve got just the tools for the job. 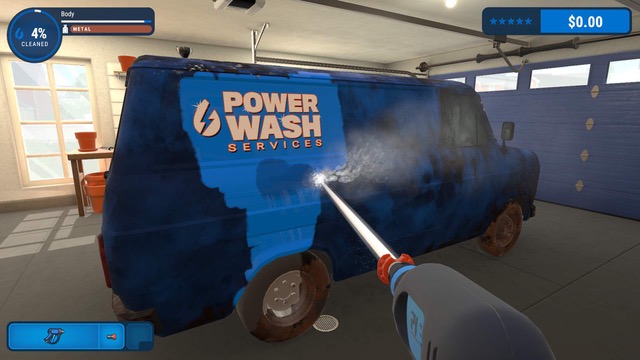 Onto the Cleanup!
The game’s main mode is Career, where you’ll learn the basics of power washing and eventually unlock all sorts of cool gear, including new nozzles and cleaning liquid that can make your life a little easier for a while. You’ll have to earn them by completing jobs, starting with your super- dirty van and accepting others as they come along.
Your progress is kept track of through a percentage system within the game, so you won’t be able to cut anything short. Fortunately, you can do this at your own leisure, so it actually simulates you cleaning up something over the course of the day. Granted, it does get repetitive over time, like actually washing stuff, so if that isn’t exactly your forte and you need variety, you might consider just playing this in short bursts.
But, the good news is that this is fun to play. Even with realistic work principles, PowerWash Simulator plays really well; and being able to switch between different nozzles and cleaning fluids is a nice touch. Not to mention the other modes included here, such as Challenge, where you try to clean as much as you can with a limited amount of water; a Specials section with unique settings to clean up; and a fun Free Play mode, where you can kick back and clean however you wish.
The best one, though? There’s co-op support. That’s right, you and a buddy can team up to wash things in online play. There’s nothing really competitive here, sadly, but it’s still cool to work together to clean the house or whatever else you need to. 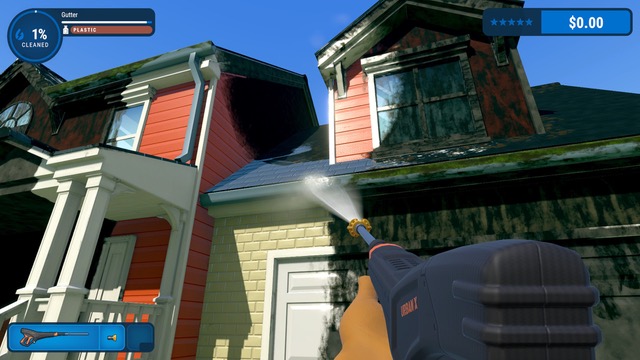 A Good Looking Dirtfest
Despite the basic principles that PowerWash Simulator skirts by, it’s done really well. Each of the grimy settings pose an interesting – and sometimes humorous – challenge. On top of that, there’s a great “dirt indicator” that pops up with a press on the right of the D-pad, so you can see where you might have missed something. The game also has a smooth frame rate, although sometimes it can be tough to see certain parts of the level unless you get creative (like with a ladder).
The music’s soothing in PowerWash, and the sound effects are what you’d expect. But this is something where the soundtrack could’ve used some “oomphing” up. Like some classic rock music or, at the very least, your character whistling the Mr. Clean theme. Maybe in the DLC…

It’s a Fun Job, and You Should Do It
Even though PowerWash Simulator lacks in genuine complexity and competitive features (“Bet I can clean this damn car first!”), it more than makes up for it with gameplay that’s surprisingly entertaining and a mostly well-done presentation. Here’s hoping that enough people pick up on it so that the developers can really, ahem, clean house.

The Bottom Line
It’s fun to get down and dirty (or clean?) with PowerWash Simulator, just because it’s just a pleasant blast of fresh air (or water?). 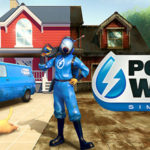