Aw, man. Talk about your missed opportunity.
1up could’ve been a fun take on the video game competitive scene, offering something that would actually have a voice, especially in this day and age when “woke” gamers and GamerGate thumpers are doing their worst to try and take the fun out of video games.
But, instead, it’s by-the-numbers, with inane dialogue, poor character development and a set-up that looks like it was lifted straight out of Revenge of the Nerds. In fact, all this movie made me want to do was watch Revenge of the Nerds.

Hard Life In the Competitive Lane
The movie follows Vivian (Paril Berelc, who’s actually quite charming with what she’s given) as she competes on an eSports scholarship at a local university. Along with her teammate Sloane (Hari Nef), they’re just trying to show off their skills. But, of course, the dean isn’t crazy about it; and the other male teammates are beyond sexist. In fact, they’re a little too sexist, as it were.
So they decide to quit the team, but still have to find a way to compete to keep that scholarship.
But the school, thanks to that university head, will only fund one team, and, well, the boys look too good. But enter a professor by the name of Parker (Ruby Rose), who forms a team with the two ladies alongside some wild cards, naming them the 8-Bits. It’s up to them to “get good” as it were and show the boys that they can kick butt and take names.
It’s an interesting premise, and, in the right writing hands, it could’ve gone a long way. Alas, it was not in the right writing hands. As a result, 1up suffers badly. 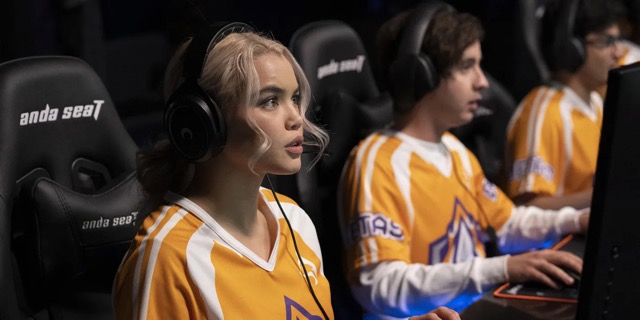 Terrible Jokes, Poor Character Development, and More
There are a lot of problems with 1up. The first is the storytelling, which is barely there. It gets things moving, sure, but it never explains a lot of things. How the girls find that much-needed camaraderie. Why the boys act like dicks. It misses out on so many beats. And the character development is so low-level, it’s hardly explained why some people are the way they are. It just misses out on so much.
But the thing that’s really missing here? The laughs. The movie’s R-rating simply comes from some by-the-numbers jokes and poorly placed cursing that substitutes for any level of genuine humor. There are a couple of moments, but they’re fleeting, and are that are left are the groaners that even the jerk guys in the movie wouldn’t tell. Well, maybe. Depends on what they’re playing.
Not to mention there’s some weird drug use, and just some genuinely lacking teamwork. It just all falls apart out of the hands of director Kyle Newman (who did so, so, soooooo much better with Fanboys). In fact, the only thing done justice here is with the games themselves. There’s an appearance of a few classics here and there, along with some gameplay footage from an upcoming Amazon game (which, surprise, might explain why the movie is airing exclusively on Amazon Prime).
I wish things were better, because the movie has a pretty good cast. Rose is a real charmer as the professor, and Berelc and Nef do great with what they’re given as well. Not to mention that Kevin Farley, Chris’ brother, actually has enough comic heft to make something of the university’s dean. Alas, the script didn’t let him. Damn. 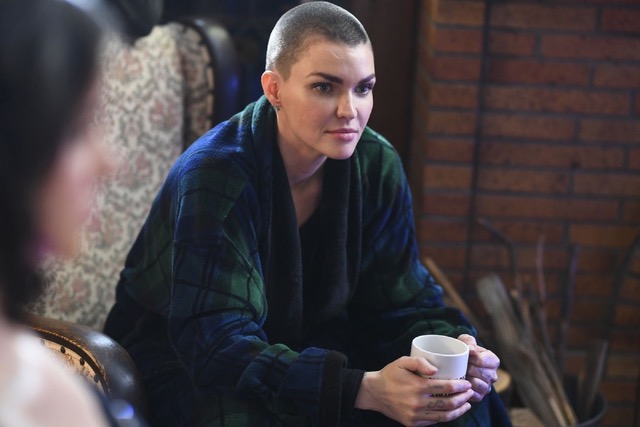 A Lost Opportunity, Big Time
I can’t reiterate how lost 1up truly is. What could’ve been a fun, and story-worthy, video game movie is lost in a terrible script that doesn’t give its characters enough of a chance. And at a time when female video game representation could’ve gotten some true justification – while still having a lot of fun with its theme – this is just depressing to watch.
It reminded me a lot of the 2012 movie Noobz. Some good ideas on the drawing board, but lost in a field of garbage when all we needed was some characters to believe in and some genuine laughs.
Maybe one day we’ll get a competitive video game movie that’ll have fun with its content. Alas, today is not that day.

The Bottom Line
Good performances from Rose and others can’t save an atrocious script and bad character development that fails to do the competitive video game world justice. Instead of 1up, they should’ve called this Game Over. 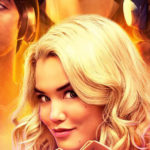