If there’s a company that’s managed to make most genres its own with its unmatchable style, it’s WayForward. Whether it’s with fighting in Double Dragon Neon or the River City Girls games, or nailing side-scrolling platformers with DuckTales Remastered, The Mummy Demastered and the Shantae games, the company has a knack for really adding their own beautiful touch to each effort.
And the same can be said for Spidersaurs, a Contra-esque run-and-gun shooter that initially debuted on Apple Arcade a few months ago, but is finally available for consoles. Despite some slight issues here and there (mainly with how quickly it is to beat), there’s a lot of personality here, along with suitable action that should keep fans of the genre delightfully giddy. 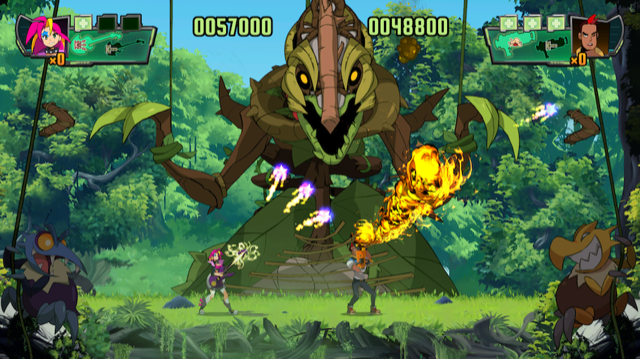 Welcome To Jurassic Fork?
In the game, you work as an up-and-comer in the INGEST Corp, a company that just introduced a way to solve world hunger – with dinosaur/insect hybrids! (The story actually does make sense in a silly sort of way.) But before you can yell Jurassic Park, the monsters break loose, and the corporation calls on you and a fellow intern to solve the matter the best way possible – with guns!
The game features two delightful characters to choose from, including rock star Victoria and sporty pizza boy Adrian. Over the course of the game, you’ll be able to use their special abilities – and a whole lot of creative guns – to stop the Spidersaurs and, um, chow down on them?
Whatever, again, it’s silly in a WayForward sort of way. What rules about Spidersaurs is how it nails down the run-and-gun genre across a few short levels. The gameplay feels as Contra classic as you can get, right down to unleashing a specific stance for getting into the nooks and crannies to destroy certain foes. Not only that, but the challenge is balanced just about right, with some particularly tough bosses later on down the road.
Spidersaurs also supports two-player co-op, so you can bring a friend along for the ride. Of course, it takes two to tango, so don’t hesitate to have some back-up by your side!
Overall, the game is a lot of fun, but it’s too short, as we wrapped it up within just a few short hours. There’s very little extras here as well, but, in that regard, it does kind of fit the classic Contra mode. It’s all about the journey, not the destination. 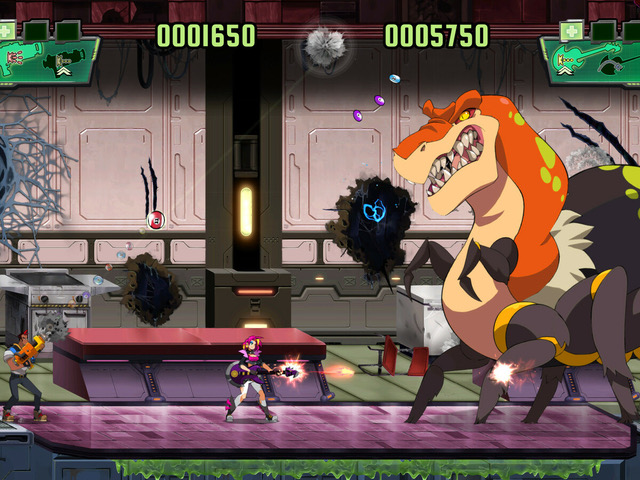 A Rad Looking Shooter
Along with great gameplay, Spidersaurs also scores (hey, I rhymed!) with a solid presentation.
First off, the visuals are lovely, featuring a great deal of character with both the main heroes and a lot of the creative bosses. In fact, some of the encounters might just overwhelm you in how good they look. (Just don’t take your finger off the trigger.)
On top of that, the character voices are excellent, with even some buddies in the lab having their fair share of humorous laughs. If there’s one thing WayForward knows, it’s how to bring in the best voice actors.
Perhaps the best surprise, though, is the music. Provided by legendary composer Harumi Fujita (think Rescue Rangers NES), it’s well concocted throughout, with good action vibes that fit in perfectly with the whole Spidersaurs theme. You may even be tempted to download a few MP3’s when you’re done. (They’re easy enough to find on YouTube.)

Short But Certainly a Sweet Treat
Despite its lack in length and extras, Spidersaurs is still a triumph for the team at WayForward. It adds its own distinctive touch to the Contra team across an array of entertaining bosses and fun weapon types; and the main characters have a lot to offer too, along with some humorous secondary additions. The gameplay rocks, and the presentation is probably amongst WayForward’s best. If you’re itching for a new run-and-gun and don’t mind getting a little overstuffed with good vibes from the visuals and music, then Spidersaurs is a must-have snack.

The Bottom Line
It could’ve used a few more levels, but Spidersaurs remains a loving tribute to all things Contra. Plus it might just make you hungry. 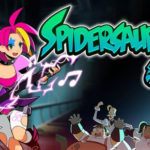