Two classics are about to get a second chance.

What is it about some games that become so overlooked, only to then attain cult status when they aren’t in wide distribution anymore? We’ve seen it in this industry quite a bit, and usually, it just leads to collectors paying hundreds of dollars for the game just to say how much they love them.
This is especially true of Bandai Namco’s Klonoa games. Though only two titles – Door To Phantomile for PlayStation and Lunatea’s Veil for PlayStation 2 – came out on consoles (there were fun portable games, too), they’ve since become hot in demand. Door manages to get a few hundred dollars on eBay, and Veil isn’t too far behind in terms of collectability.
Fortunately, Bandai Namco is finally understanding the value of said games, and in just over a week’s time, we’ll see the Phantasy Reverie Series for current consoles, bringing back both main console releases for a new generation to enjoy.
The company recently released a demo featuring some levels from both games for us to try (on the Japanese Nintendo eShop), so here’s our impressions of what we’ve seen thus far!

Door To Phantomile
First off, Klonoa: Door To Phantomile has been remade before with a great-looking remake on the Nintendo Wii a few years back (which, not surprisingly, is also a high-in-demand rarity).
That looks to be the similar path with the modern version, which looks just as good as it ever has. The beautiful colored details on the levels are stunning, and the game moves at a nice, fluid 60 frames per second throughout. Even when things are hectic with some battles, it still moves along pretty nicely.
For that matter, the music continues to be good and upbeat, taken straight from the original games. The Japanese dialogue has also returned, though the final game will likely have an English option for those who prefer the re-recorded voices. The sound effects are top notch and there’s something to be said about how good it all sounds on headphones.
As for gameplay, Klonoa continues to be quite responsive here with his platforming abilities.
You can hover, grab items, shoot yourself into the air with the help of a downed enemy and more. This will help you in grabbing gems, defeating foes, finding other bonus items and more.
Overall, Door To Phantomile just feels better than it ever has before. And keep in mind this is coming from a fan who’s been loving the game since its original PlayStation release. 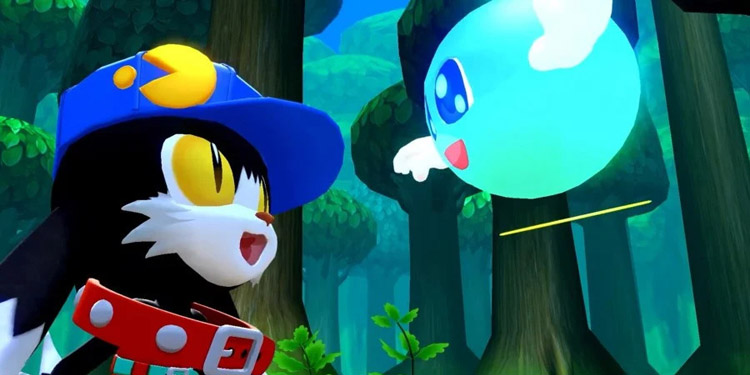 Lunatea’s Veil
The big surprise in this collection thus far is Lunatea’s Veil, which never saw any kind of re- release outside of its PlayStation 2 days years ago. Here, Bandai Namco has given it a proper level of respect as well, even if there’s only one stage in the demo.
The soundtrack is much more dynamic with this particular game, changing as you go both indoors and outdoors and sounding exquisite throughout. For good measure, the visuals are beautiful here as well, and the levels seem more interactive. In one part of the stage, for instance, you have to throw enemies into a big swinging club in the background to break apart blocks so you can keep going forward. This has never looked better, especially in glorious 4K.
Plus the gameplay continues to be top-notch. Like Door To Phantomile, Klonoa has great handling here; and the bonus flying and swimming stages should add a degree of 3D to the proceedings in the final game.

This Collection Will Be One For the Ages
If you somehow missed out on Klonoa before or you just couldn’t afford the few hundred dollars required to invest in it, now’s the perfect time to get caught up. Phantasy Reverie Series looks to be the ultimate collection, even without the GBA games; and who knows, it might just prompt the company to give this unique hero a new go-around.
We’ll see how the collection fares when it arrives digitally (and physically overseas) on July 8th!