Anyone who owned a Super Nintendo is probably familiar with the series name Pocky & Rocky. Produced by Natsume (and developed by Taito), the two SNES games – which are now huge rarities, especially complete with box and instructions – feature a young girl and a raccoon battling the forces of evil. How? Ninja magic and lots of shooty shooty, of course.
While the games have retained a bit of a legacy, it’s been ages since we’ve seen a new one.
However, Natsume and ININ Games has never forgot about the duo; and now we have a completely new adventure for PS4/PS5 and Nintendo Switch, Pocky & Rocky: Reshrined.
Now, just a word of warning – this game is hard. I’ve cursed up a storm on a couple of levels myself. That said, however, it definitely fits the duo, and will be a welcome treat for anyone who’s ever enjoyed their adventures before. In fact, if you live and breathe old-school, you should own this.

Deflect and Reflect
Once again, the game alternates you between the two heroic characters as they face off against a whole new horde of demons. And, like before, you can have a second player join you in the fray, which is highly recommended for some of the more challenging boss encounters.
Over the course of Reshrined, you can pick up different power-ups that provide various fighting effects for each character, like leaf blasts and fireballs. The more of a certain kind you pick up, the more powerful you become. But be careful – one lost life and you’re back to a lesser firing power, until you pick up more power-ups.
The game’s challenge level is pretty high. There is an extra easy mode, but, inexplicably, you need to pick up so many coins in the game to unlock it, which is damn near impossible. There’s also a super hard mode in case you’re berserk enough to give it a shot. 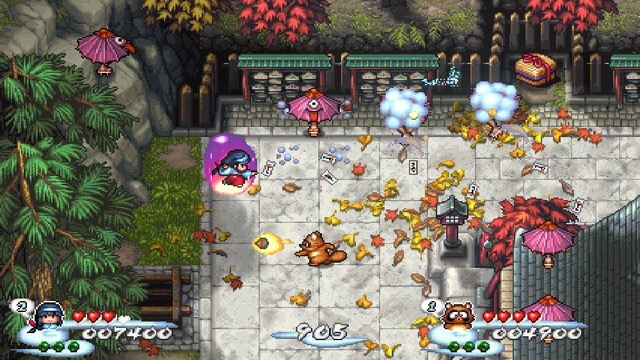 Even with the difficulty, however, Reshrined is a real treat. The gameplay works naturally, between your multi-directional firing (I do wish there was a lock-on button) and being able to deflect enemies with a sash or leaf. You can also perform a roll technique to get out of harm’s way, as well as perform occasional magic to clear the screen. Trust me, these are really helpful.
On top of that, the co-op, while local only, is wonderful. It’s a blast playing alongside a friend, and will evoke memories of those classic SNES games – without having to pay a hefty price to add them to your library, of course.

A Good Looking Old-School Romp
Natsume and ININ Games did a remarkable job making Reshrined pretty much feel like Pocky and Rocky 3. The visuals remind us of the SNES days of old, but with some nice lighting and weapon touches that are surprisingly deep. For that matter, the boss battles look great as well, even if some will definitely put you through their paces. Just gotta practice and win them over, I suppose – it makes for perfection.
The maps and level layouts are also excellent, with lots of goodies to find and enemies to overcome, so you can collect more precious coins for power-ups and, hopefully, unlocking that easy mode. Again, some of the effects are worth noting.
Finally, the music is absolutely charming, with a soundtrack coming right out of the SNES days; and the sound effects are good, if somewhat minimal. They are about where they need to be with the other games, however, so it’s hardly a negative. 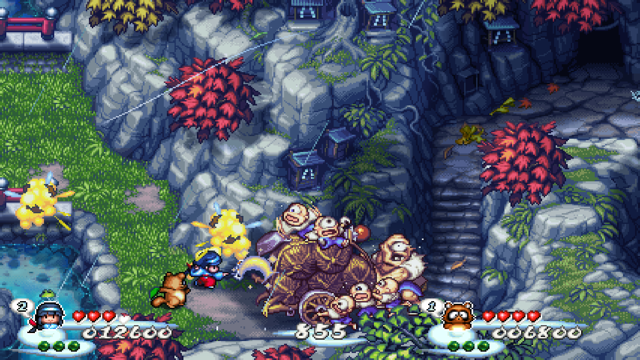 Let’s Rock the Shrine
Even with its high difficulty setting and its lack of online co-op, Pocky & Rocky: Reshrined serves as an absolute blast from the past. Natsume and ININ Games have channeled in the retro flavor just about perfectly; and save for some new power-ups or the ability to play extra easy mode without dragging yourself through hell, it’s really fun to play. Just get a battle partner if you can, you’ll thank us later.
Kudos to ININ Games for yet another treat alongside their other releases as of late. Now, what about classic franchise can the company revisit? I’m kind of hoping for a new Elevator Action myself.

The Bottom Line: If you can overcome its heightened difficulty settings, Pocky & Rocky: Reshrined is old-school gaming fun done right.

Just a heads up that you can get the Pocky and Rocky Enshrined game either digitally or physically! (provision of the developer) Want to add it physically to your collection? Visit here: https://gamesrocket.com/us/Pocky-Rocky-Reshrined/ 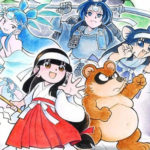