Cowabunga really does say it all.

We’re not sure when 2022 became the year of the resurrection of the Teenage Mutant Ninja Turtles franchise in gaming. But, boy, are we glad it is.
Some of the characters are still coming off a successful add-in to Nickelodeon All-Star Brawl; and Konami is giving their classic Ninja Turtles games some love with a Cowabunga Collection coming sometime this year. But the real high point has already arrived in the form of Tribute Games’ remarkable beat-em-up Shredder’s Revenge.
Inspired by the games of old but completely new and loaded with fan service, this game is all about satisfying even the most die-hard Turtles fan. There’s a nod to classic characters everywhere, along with hidden secrets, satisfying multiplayer, a good challenge and the freshest gameplay we’ve seen in a brawler of this type yet. In other words, it’s a shell of a good hit.

Fight Like a Turtle!
The first thing you’ll notice is how smooth the gameplay is. This isn’t just “strike the enemy” until they’re dead territory. You actually have different moves to master, including a sliding tackle, an uppercut-style move, and many others. On top of that, you can charge up supers to really clean house on groups of enemies.
There are also some awesome boss battles featuring several faces that are a blast from the past. To spoil them here would be a bit much – but just be prepared for a fight, because, boy, you’re going to get one.
Shredder’s Revenge feels absolutely natural to both fans of the original Konami arcade games and beat-em-ups in general. What’s more, you can totally team up with up to five other friends (six players in all!), across online or local play. No matter what option you choose, you’ll find fun brawling options galore. Not since the days of the two-screened Konami X-Men coin-op have we seen such a rad feature.
On top of that, the online play is wonderful, with great rollback code that doesn’t miss a beat when it comes to the action. It can take a little bit to connect, so show some patience at first. Eventually, you’ll hop on and fight alongside your fellow turtle freaks. (Or Casey Jones, if that’s your thing.)

A Bodacious Presentation, Dudes
There’s a lot going on with Shredder’s Revenge that we really like presentation-wise. For openers, the graphics are absolutely fresh, with great hand drawn animation, solid backdrops and some really good looking effects. For good measure, the secret stuff you encounter is a lot of fun too, and will have you looking through older episodes of the series to see what you might have missed.
The music is also quite cool, reflecting back to the earlier days of the Konami games. Gone are any recurring nightmares of the dreadful soundtrack from Turtles In Time Re-Shelled, and in its place is a groovy collection of tunes that you should totally add to your collection. Throw in many authentic voices from the original 80’s cartoon, and you have a totally wicked retro treat.
There’s just one thing. Since this is a beat-em-up, the journey eventually comes to an end all too soon. That said, there are a lot of challenges to conquer, moves to unlock, and stuff to collect for secondary characters. Not only that, but the world map is worth checking out, even if that means scooting everywhere in your sweet turtle van. 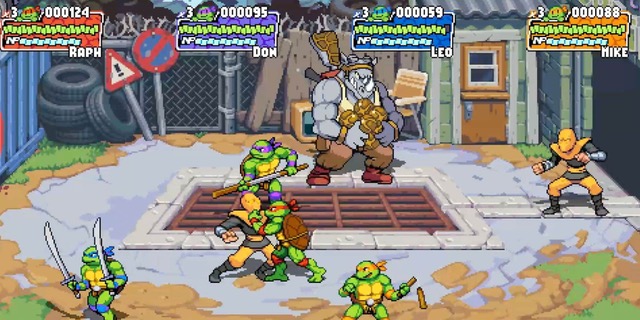 Shell Out the Cash For Shredder’s Revenge
What a wonderful beat-em-up that Tribute Games has put together here. Shredder’s Revenge channels the energy of the old games perfectly, while delivering a worthwhile experience that still stands out amongst today’s finest beat-em-ups. The graphics and sound truly give us the goods; the gameplay is sharp, varied and good fun; and the option to play with five other friends is radical, to say the least, dudes.
If Tribute Games (not to mention DotEmu) keep up on this kind of streak, who knows what other great beat-em-up territory can be covered. A new Golden Axe from these guys would be really bossa nova. (Sorry, Chevy Nova? Okay, EXCELLENT!)

The Bottom Line: Easily one of the best games of the year and a shell of a good beat-em-up, Shredder’s Revenge is an absolute must during your next get-together with friends. Don’t forget the pizza! 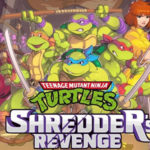