Go on, get your kicks in.

I think Nintendo has done remarkable work with sports games in the Nintendo Switch generation. Mario Golf: Super Rush is one of the best entries in the series; Mario Tennis Aces has grown into a tremendous addition to the series (compared to the Wii U failure); and Nintendo Switch Sports continues to be a big hit a month past its release.
Now we have another series making the jump from an earlier platform, with Mario Strikers: Battle League introducing arcade-style plumber soccer to the Switch. The formula may not have changed too much from previous games, but the thrilling arcade-style action of the series remains intact. And really, that’s more than enough reason to add it to your collection. 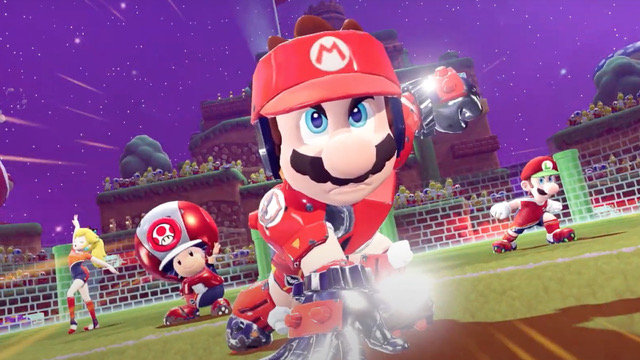 Bring Your Friends Because This Is a Soccer Riot
The cool thing about Mario Strikers: Battle League is how easy it is to get into the gameplay, even if some things are a little hard to master. You’ll get the hang of passing and shooting like a pro, but then there are other things, like defensive maneuvers as well as items that you can use to try and get the ball back from the opposition.
Then there are the beautifully over-dramatic Hyper Strikes, in which you can try to go for a score in the most epic way possible. There’s all sorts of superb Strikes available, no matter which character you go with. And it’s fun to watch, even if you’re on the receiving side, because you’ll be in awe of such a spectacle while still remaining on the defensive side of things.
Along with great controls that allow you to adapt to the action rather easily (even if you’re using JoyCons), Mario Strikers also benefits from options galore. You can take on a quick match, or even hop online and see how you fare against other players. And, of course, considering the Switch is such a party console, you can have up to seven other people join you in a match. It’s pretty wild, and the action can really get ferocious. But it’s probably the best sports experience you can get, especially for those that love soccer.
Not to mention character stats can be balanced nicely (even with Wario, so he can’t cheat!), the AI is perfectly reasonable if you want a challenge, and the online play works refreshingly well.
You may want to practice a bit before you take on the opposition, however, because they can be tough. You were warned. 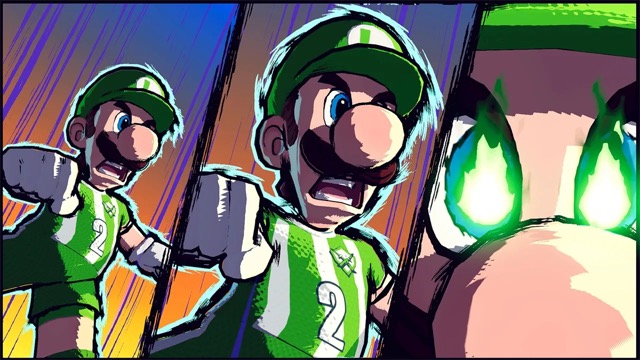 A Fantastic Looking Game
Mario Strikers: Battle League may be the best looking entry in the series, even putting the previous Wii version to shame. The animations are stellar, particularly the Hyper Strikes, which really bring out the most in every character. (Yes, even Luigi.) The arenas also show outstanding details, and the power-ups are a true joy to watch. As a whole, the game is a lot of fun on the eyes, even though the action, again, can get a little frantic with eight players in the mix. You’ll get used to it and be just fine, however.
Likewise, there’s no complaints about the audio whatsoever. Character voices are spot-on like always; the music is a superb mix of electric rock and other themes; and the sound effects are what you’d expect, right down to the flaming effects that come from hitting a ball in the best way possible. Turn up your speakers for this one, you won’t be sorry.

Sock It To Me!
Even though there’s not many advancements in terms of how Mario Strikers plays, Battle League is still one of the finest experiences you can get on the Nintendo Switch right now. It’s loads of fun, whether you’re playing on your own or with several friends in a madcap scoring session. It’s also great online, though there are a lot of challengers to go through, so make sure you’re ready. Finally, the presentation cannot be beat, it’s second to none when it comes to sports action.
No, Mario Strikers may not be a giant leap forward for the franchise, but it still shoots and scores like a grand champion.

The Bottom Line: Even if you just slightly enjoy the game of soccer, you owe it to yourself to give Mario Strikers: Battle League a shot at victory. 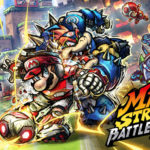