Back to the old school.

It’s kind of interesting how the history of the Wonder Boy games went. The first one was a Sega arcade release that eventually branched into an entirely new series for Hudson Soft, Adventure Island; and the Wonder Boy series itself soon turned into a series of side-scrolling adventure games with new abilities. We’re not sure what prompted Sega and the developers at Westone to make the switch, but a lot of adventure fans were happy that they did.
And now we have the collection that pays tribute to the games with Wonder Boy Collection, featuring four of the best titles in the series. These include the original arcade game that started it all, Wonder Boy; along with Wonder Boy In Monster Land, Wonder Boy In Monster World and Monster World IV. Alas, there’s no sign of Wonder Boy III: Monster Lair or Wonder Boy III: The Dragon’s Trap – unless you buy the Strictly Limited Games physical release, that is.
Seems like a sham to us, but at least we have the previously released version of Dragon’s Trap that’s worth its weight in gold.
So how does the remaining collection fare? Pretty well, though it really depends on your love of Wonder Boy. (And we don’t mean the Tenacious D song.) 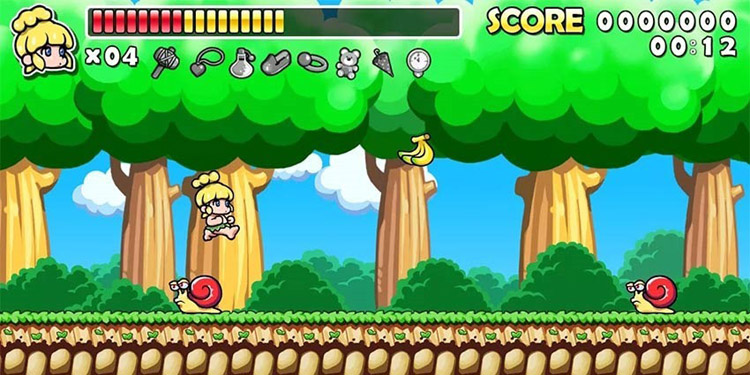 A Dive Into History
The first Wonder Boy is an arcade delight, even if the controls are a bit slippery at times. You’re basically a kid throwing hammers at enemies and picking up fruit before he loses energy. That’s it, basic principles. But it’s a nice place to start before you dive into the rest of the games, which have a much different theme.
Wonder Boy In Monster Land is quite different, going with more of a role-playing adventure sort of take. It’s weird, but it’s pretty cool, despite the visuals looking like, well, something out of the Master System era. (There’s a reason for that.) This is a good one, though it would’ve been nice to work out a remaster akin to what Dragon’s Trap did years ago.
Wonder Boy In Monster World is Sega Genesis classic gaming at its finest, with much better looking visuals, a fun quest, and some entertaining boss fights. It’s a real winner, though it may not fare as well to some as Monster Lair may have. Oh, well, it’s still a joyful trip.
Finally, Monster World IV is the real treat here. It’s got the best adventure of the series, along with beautiful visuals and great gameplay that really show some great inspiration.
I’d start with the first game and work my way forward, but if you’re a fan of the series already, you should head to Monster World or Monster World IV first. They definitely give you your money’s worth. 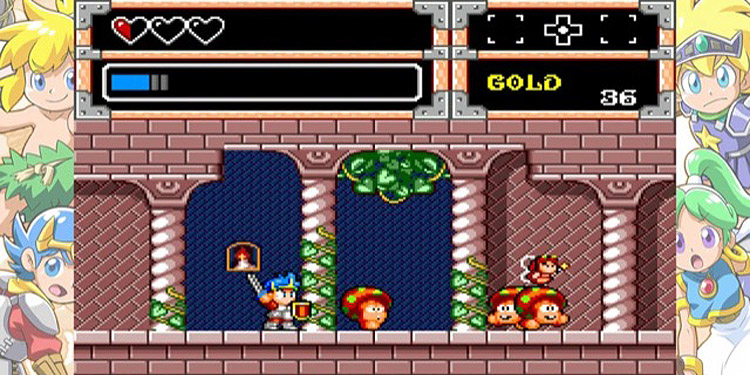 Just a Little Bit of Wonder-ful
Despite the missing games (which, again, wasn’t really necessary on Inin’s part), Wonder Boy Collection is still a must for fans of the series. It’s great to see the original game in action again (and we mean the original arcade code, not the revamp that came out a while back), and the further adventures are worth a shot as well. Pair these with the previous release of The
Dragon’s Trap, and you have a saga that’ll easily get you through a weekend. Wonder on that.

The Bottom Line: It isn’t the complete Wonder Boy compilation (that’s saved for physical release only), but this Collection isn’t half bad in the least. 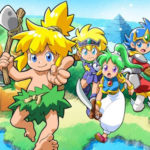