Know what we don’t see much of these days? 3D platformers. Back in the days of the PlayStation 2 and Xbox, there wasn’t a corner we could turn without running into four or five of them. Nowadays, though, they’re limited to just a handful, with the likes of Crash Bandicoot and Spyro the Dragon keeping us busy with revivals.
Now comes Kao the Kangaroo, a long lost title from the PS2 era that comes bouncing back on the scene thanks to the team at Microids. And while it’s not exactly something that screams for the genre to make a comeback, it still provides a fun refresher of how much simpler gaming used to be, when we were amused by the antics of a kangaroo with boxing gloves without wondering how he got here in the first place.

Fighting His Way To His Family
Kao is a kangaroo that’s out to rescue his family from bad guys, and that means collecting crystals across the open world stage he starts in before unlocking new areas. As he proceeds, he’ll land combos on enemies and activate platforms to get further ahead, while seeking out secrets and finding helpful power-ups, where he can land special kinds of punches.
The gameplay is hardly what you’d call innovative, but it is fun. Kao the Kangaroo benefits from keeping things clearly old-school, and it feels that way. The gameplay isn’t perfect, but it is mostly solid, allowing you to both attack and platform like a champ. Plus it’s fun seeing some older enemies from yesteryear pop up, even if they’re frogs that seem like they’re too cool for the room. (Spoiler: they’re not.)
The game’s not entirely difficult, but there are some challenges that are worth overcoming; and the secrets alone will take you quite a bit to track down. So you’ll definitely get your money’s worth out of this one if that’s what you’re looking for. There are some weird segments where platforming can be a bit frustrating, but, thankfully, they’re far and few between. 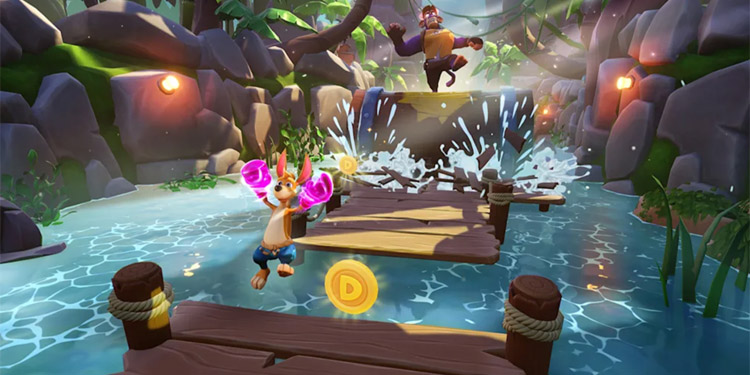 Not a Bad Looking Kangaroo Visually
While hardly getting the current-gen treatment like Spyro and Crash have, Kao the Kangaroo looks great for its revival. The visuals pop to life nicely, especially with the standout colorful levels and the cute little enemy animations. Things can get a little fuzzy on occasion, but never to the point that you’re really too distracted. Kao himself is fun to watch as well, though you gotta wonder how he was able to get his boxing gloves on. His feet, perhaps?
Likewise, the music is cheerful and energetic, and a lot of fun to listen to over the course of your journey. It’s a real treat how it changes up based on the themes of each level as well. I just wish the voice work was up to snuff, as it sounds a bit generic considering the inventiveness that’s gone into the visuals. It’s not Resident Evil horrible, though. 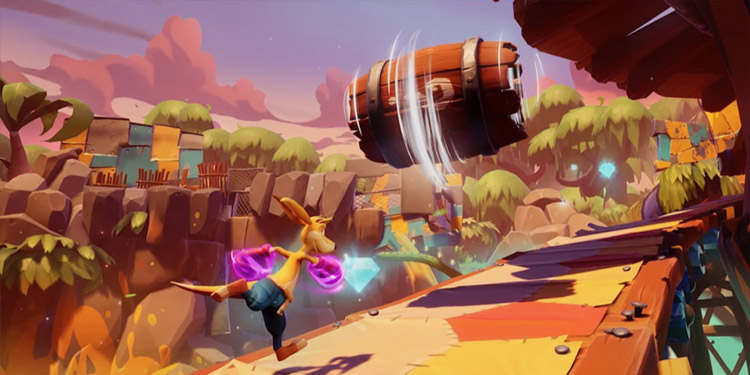 Worth Hopping Around With
Obviously there are bigger and better platformers out there if you’re a fan of the genre, as Kao doesn’t exactly yell “instant classic!” like they do. Regardless, it’s nice to see him back in action in this fun little game. It’s a delight to watch, fun to listen to, and mostly great to play. And there’s a lot to do here, so it’ll keep you and the kids busy for several hours as you seek out every nook and cranny.
And who knows? Maybe this will inspire Microids to bring back a few older favorites. I mean, what’s Vexx been up to lately? (Look him up.)

The Bottom Line: Not the greatest of platformers out there, but Kao the Kangaroo packs quite a bit of fun in its pouch. 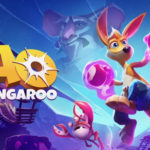