Back in the early 90s, “cute” and endless action games seemed to rule the arcade. Taito’s Bubble Bobble led the charge, along with countless others like Rainbow Islands and Nightmare In the Dark. But then there’s Snow Bros., a unique game where you control two snowmen using their powers to overcome demons and save their girlfriends – only for the roles to be reversed and suddenly letting the girls be the rescuers.
The original arcade game was a cold blast of fresh air, and the home versions – including the rare NES game and the unpublished Genesis version – followed suit nicely. Now, we have a new version with Daewon Media’s Snow Bros. Nick & Tom Special, which brings back more of that arcade-y goodness for fans to enjoy. It may not be the ultimate old-school trip, especially for those that didn’t get a kick out of the game in the first place. However, there’s some joy here, especially if you’ve got a friend in tow to throw snowballs with. 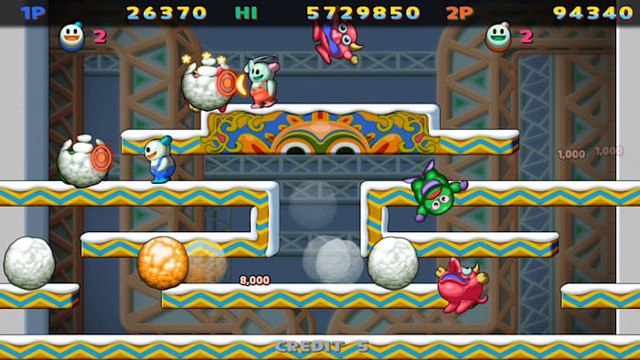 Snowing Them Over
So when it comes to defeating enemies in Snow Bros., it’s a matter of how well you can build and roll giant snowballs. This means hitting an enemy a few times until they’re trapped in one (and stay safely trapped so you don’t lose a life), then rolling them down and seeing how many enemies you can hit. This multiplies your score nicely, so it never hurts to start at the top and work your way down. But, hey, play how you want to play.
Like the original game, Snow Bros. has a number of levels to get through. Though the gameplay doesn’t really grow that much (you can pick up speed and power boosters, thankfully), it still remains timeless fun, and the strategies you can put together for tougher enemies is pretty cool. You can also see where you sit on an online leaderboard, across Arcade, Survival and Time
Attack modes, all of which offer something cool in terms of snow flinging.
What’s more, like arcade classics of old, you can also have a friend join in for some two-player fun. It’s good to play with a friend, as you can either get competitive or work together to clear off the stages. Or just have a big ol’ snowball fight if you’re really that bored. There’s also DLC with a new Monster Challenge, in which you can take on multiple enemies using actual enemy characters and their creative attacks. Alas, it’s paid, so it doesn’t come with the original digital release. (It will be on the physical version that arrives next month, however.)
But if you’re a fan of the series, it’s worth the investment and adds to the overall play time. 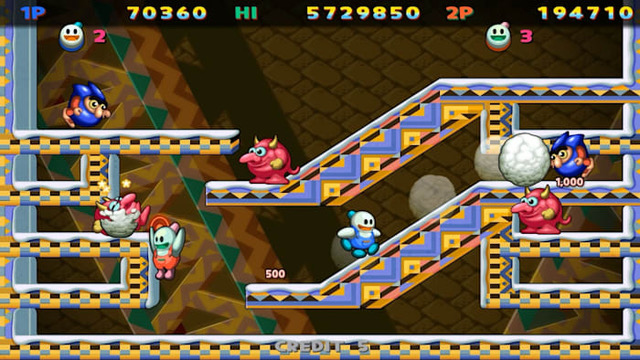 The Presentation Is Sharp, But Not Incredibly Improved
Snow Bros. retains the same classic look as the original game, but with mild improvements. It moves nicely at 60 frames per second and has polished, pleasant visuals, with options to tweak a few things if you prefer. Overall, it doesn’t look amazing, but it does stay true to the code of the original arcade game and NES version. So if you loved those, you’ll feel right at home here. As for the sound, it’s all right. The music could’ve used a little more variety, but the tunes are fun to listen to anyway. The sound effects don’t offer much diversity, but, hey, you can always blast your own Christmas tunes or anything snow-related. How about some “Wizards In Winter” by Trans-Siberian Orchestra?

A Snowy Treat
For $20, you don’t get a next-gen version of Snow Bros. that’s leaps and bounds over the original. But the devs know that the simplicity and fun of the game speak for itself, and that’s where this Nick & Tom Special succeeds. It has polished visuals that aren’t too shabby, along with fun gameplay across many stages and good local two-player. I do wish the DLC was part of the digital package, but overall there’s a great deal of value here – especially if you loved the original games.
Now, then, Clear River Games, since you’re working on Toaplan franchises, how about a souped-up Zero Wing? Or the Truxton titles?

The Bottom Line: Snow Bros. Nick & Tom Special isn’t the ultimate arcade revival, but it’s a fun treat for anyone that grew up with anything related to snow. 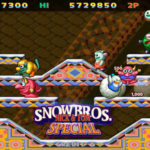