When you have a game that’s based on a horror movie legacy, it can go either one of two ways. It can either be a kick-ass affair that gains a huge following and pays loving tribute to the series it’s based upon, or it can be a mess.
The Evil Dead franchise has seen its shares of ups-and-downs over the years, but at least it ended on a high note with the romp-filled Evil Dead: Regeneration a couple of generations ago.
But now Saber Interactive is serious about paying tribute to the Bruce Campbell-headed horror franchise, bringing him and plenty of other beloved characters back for another go-around of gory goodness. Evil Dead: The Game delivers, even if it is slightly short-handed when it comes to a general story mode. No matter – we’ve got Deadites to kill, baby.

4 vs. 1 Multiplayer, But Not In a Typical Way
The huge draw to Evil Dead: The Game is its multiplayer. Saber Interactive knows this area well, having produced another successful movie-to-game with World War Z. This time around, you’ve got four well-armed humans against an evil demon presence that can throw all kinds of stuff at them.
“Sure, we’ve seen this before with Predator and Friday the 13th and it’s not guaranteed success,” you might be saying. But Evil Dead feels right, for a couple of reasons.
First off, the gameplay has a good amount of balance. Even if you’re stuck playing the demon presence (the Kandarian Demon), there’s a lot of cool things you can do to throw at the humans, particularly with a fresh set of monsters to unleash. It takes a little practice, but it’s good to be bad.
Honestly, though, I had more fun with the humans. Yes, there’s a lot of Ash to go around, and Bruce Campbell is along for the ride, bless him. But there’s also the Ghostbeaters, as well as other random characters from the series that actually serve a great purpose too. Teaming them up together to complete fun objectives and smash Deadites to smithereens is a real joy. Some matches can take a little while to connect, but, overall, the experience that Evil Dead: The Game delivers is absolute bloody joy. Some may not get the structure without a heavy single player component (though there is something here – more on that in a second), but the multiplayer is a gas and is sure to gain a following along the lines of Friday the 13th. Hell, maybe even stronger. 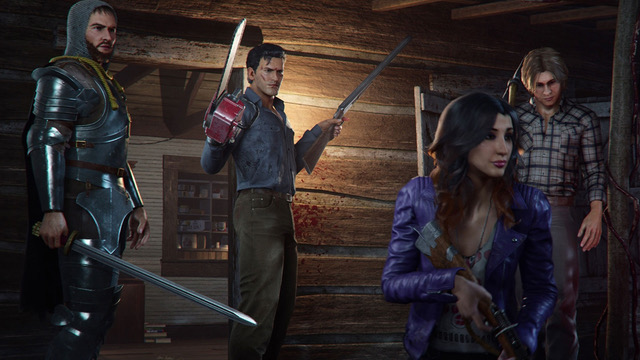 There’s Stuff For Single Players Too
Yes, there’s no story mode, which would’ve been awesome. But Evil Dead: The Game serves up a handful of single player missions that will keep you busy and entertained. What’s more, you’ll master some of the basics here and take them into multiplayer with you, where it absolutely counts. There’s also a tutorial mode, and it’s here you can learn the trade on your weapons, be it a chainsaw, a meat hammer, or one of those nifty rifles that can blast off a head at 60 paces. No matter what loadout you go with, Evil Dead has options galore, and it’s fun mixing things up and then smashing foes to pieces.
That’s not to say you’re invincible, however. In fact, Evil Dead has a sensational “fear meter” that keeps you somewhat grounded, lest you become one of the undead yourself. It’s really cool and will have you scrambling for matches and some place to light them over the course of a game – since you like to play it dangerously and all.
The gameplay is really well done here too, and learning the basics is a huge plus. What’s more, the atmospheric design is brilliant. This isn’t a tribute to Evil Dead, it’s straight-up Evil Dead, damn it.
The maps are a lot of fun and resemble territory from the original films. The character design is on point and they animate beautifully, and watching them tear apart Deadites in creative ways is a true joy. The audio is excellent too, with the original Evil Dead actors (well, most of them) fulfilling their roles without missing a beat. (Shout out to Dana DeLorenzo – long live the Ghostbeaters!)
Throw in a divine soundtrack and lots of cool stuff to unlock, and you’ll have a game that’ll keep you busy for a while. Still, I hope the forthcoming DLC does add some cool story stuff. It sounds like we’ll be getting the castle from Army of Darkness at least, so that’s a start. 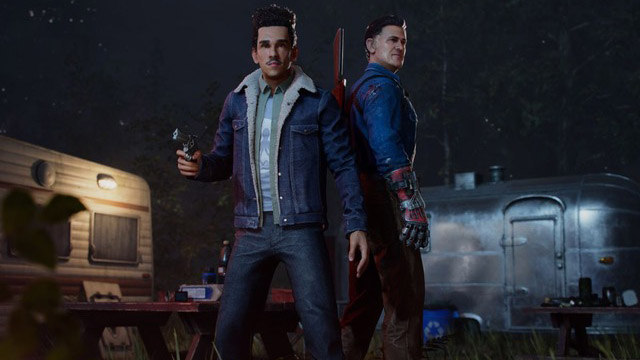 Long Live the Dead
Evil Dead: The Game isn’t totally the complete package, but what’s here is so impressive and loving to the gory franchise that you’ll have fun anyway. The multiplayer matches, once they connect, are an absolute blast with the right teams; and single player has doses of carnage- filled goodness too. Plus it’s great to have Ash back in the saddle one more time before Bruce officially leaves the character for good. Well, until the next game, anyway.
Hail to the king, baby.

The Bottom Line: Though not a complete package due to a lack of a single player story, Evil Dead: The Game has a lot to do, and plenty to do it with. Plus it’s bloody and hilarious, just like the movies. 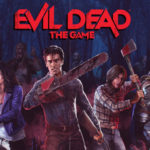