Shut up and roll the dice.

So…if you’re expecting Tiny Tina’s Wonderlands to be a massive new adventure in the Borderlands realm that doesn’t lean too much on the series’ legacy…well, you’ll kind of get that. However, if you’re down for another co-op adventure with weird companions, badass weaponry, all kinds of leveling up and polished, imaginative worlds including a butt stallion, well, you’ve come to the right place.
The main difference between this game and the previous Borderlands endeavors is the fantasy setting. Tiny Tina is back, and she’s having you roll the dice on several fantasy-themed
scenarios, working alongside warriors to eradicate the land of evil and take down an overlord that sounds a lot like Will Arnett’s Batman. (Hey, that’s because it is!)
Again, it’s definitely Borderlands themed, so if the previous games turned you off, there’s nothing overwhelming here to bring you back. Buuuuuut, on the other hand, if you really loved the series (and a lot of you do), this is well worth diving into. 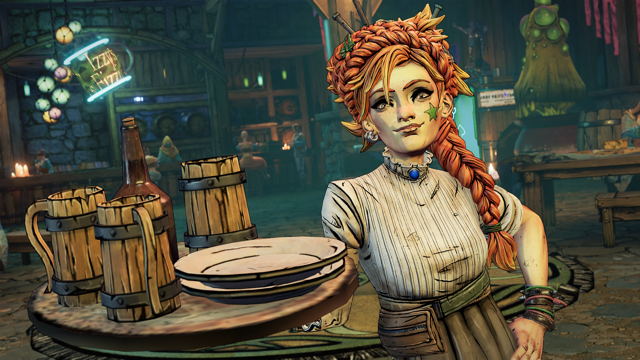 Leveling Up Like A Badass
Of course, the key aspect to Wonderlands is how much you can level up. This includes empowering your character with new skills and abilities, as well as picking up a kabillion new guns, each with special effects, firing rates and other neat tricks. It’s up to you to find the right combination that works for you, and it might take a little time. But you’ll still have good fun along the way, especially as you take down opponents while Tiny Tina cackles in the background.
The gameplay is pretty good. Not amazing and not perfect (particularly with fine tune aiming with some of the weapons), but still good enough to suit you Borderlands rogues to a tee. Plus it’s great seeing how you can mix up special abilities along with the gunfire, becoming a force with reckoning in mind.
What’s different here is the neat overworld aspect, where you guide your character in top- down third-person perspective across a realm filled with danger. It’s a neat idea, and there are some humorous touches (like a “meteor” that’s really a Cheeto Tiny Tina dropped on the board), but it would’ve been nice to have more of this type of aspect.
The rest of the game comes together as expected. Some great boss battles, awesome co-op factors for you and your friends, and a crapton of loot that will keep you coming back. Plus there are some cool alternative missions to take on, in case some of the main ones drag on.
And, sadly, some actually do. (Oh, my kingdom for a working boat!) 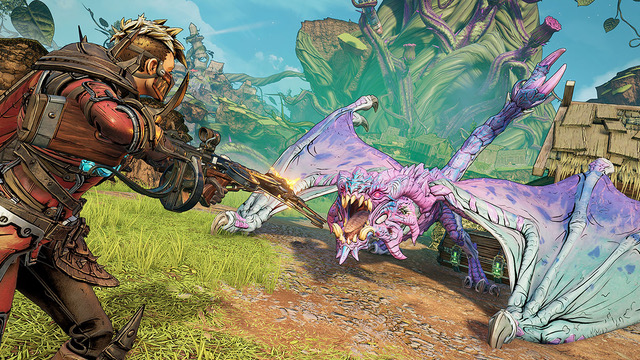 A Somewhat Mixed Presentation
On the plus side, Wonderlands might be the best-looking Borderlands adventure yet. The fantasy settings and characters are dazzling to behold, especially on next-gen systems. Some of the enemy designs are imaginative as well. On top of that, the combat is really fun to watch, especially as you start mixing up effects to do some major damage. Plus it was good to see a familiar face or two pop up as well.
That said, there are minor glitches. Nothing to throw you off from your journey, but slight areas where you can see that some more polish was needed. Fret not, patches will likely fix that in the weeks ahead.
As for audio, it’s…okay. The music is spot on and fun to listen to, and the sound effects are what you’d expect. However, voice actors are a mixed bag. Arnett makes a terrific dark lord, but Andy Samberg’s character comes across as way too whiny. And it’s really hard to envision Wanda Sykes as a robot, as much as I try. At least Tiny Tina herself is a blast, and a lot of the other characters make up for their presence.

Get Your Body In The Wonderlands
Despite some hiccups with presentation and some missions that tend to drone on too long
(looking at you, Butt Stallion), Tiny Tina’s Wonderlands is still an effective and enjoyable entry in the long-running Borderlands series. The new setting is fabulous, and the overworld aspect is fun to explore. Plus, it’s always a blast in co-op, even if you’re battling over some of the more powerful weapons in the game. That’s just how it works, though.
It won’t blow your mind, especially since it’s more Borderlands. But that’s just what some players want, so…dig in!

The Bottom Line:
Not quite as imaginative as it would hope to be, Tiny Tina’s Wonderlands still delivers on mirth, fun and shoot-em-up action for you and your friends. 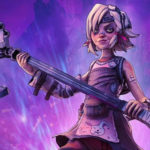