Last year was a pretty big one for Sony’s MLB The Show franchise, as it made its debut on Xbox consoles without missing a beat, right alongside its traditional release on PlayStation platforms.
This year, it’s now on Nintendo Switch, with MLB The Show 22. The choice is yours on which version you want to go with. However, no matter which way you lean, you’ll find a seriously good baseball game on your hands.
While it isn’t perfect, particularly with its repetitive commentary and occasional glitches, it does manage to get the thrill of the game just about right, and looks spectacular on higher-end platforms. Not to mention it’s loaded with features and cross-gen gameplay, which only has mild hitches on the Nintendo Switch. Let’s see how this year’s version stacks up. 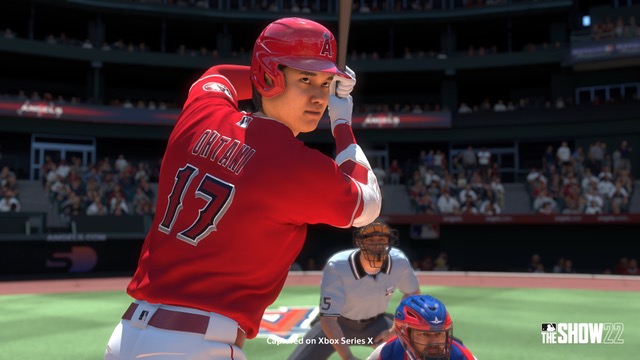 Loaded At the Plate
Like previous years, Sony Santa Monica has gameplay dialed in with MLB The Show 22. Pitching still feels natural, and you can usually do a number of great pitches to “fool” batters, though some of them might read you enough to get a hit. Likewise, batting is excellent, with a natural feel with the analog stick. And even fielding has some pretty good movement, though sometimes getting right under a ball with a diving catch can be a crapshoot, like always. Overall, though, this still plays very well.
There’s also a ton of modes to choose from. The big one is Diamond Dynasty, though you can also dabble with Mini Seasons in case you want to take your baseball action one step at a time.
Both are great and have plenty of unlockable rewards, though we could’ve done without some of the microtransactiony steps that are taken in a few spots here. It’s not too bad, however, and you can still get a lot of mileage out of it without putting in a dollar.
Likewise, Road To the Show is excellent, as you can guide your career to greatness using a number of choices and directions. It’s detailed as always, and filled with some interesting choices that can help you become a champ – well, maybe.
Franchise is good too, with some interesting moves that you can make with your ball club. It’s not completely open like it could be, but it is still cool when it comes to building the team of your dreams – or nightmares.
Finally, online play operated without a hitch for us. Granted, we didn’t test the Nintendo Switch version too much, but over on Xbox and PlayStation, we noticed zero problems with connecting in a match. You’re going to have a few great summertime matches with this one. 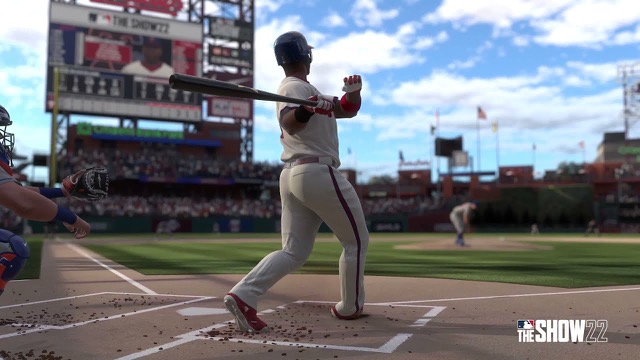 A Good Looking Baller, But Sound Could Be Better
The presentation in MLB The Show 22 has its slight hitches, but nothing to get in the way of a great-looking baseball experience. The visuals are astonishing for the most part, with ideal camera angles, TV-style set-ups, awesome animation, and detailed ball fields. There are occasional glitches, but nothing that will annoy you as you go through each round. We also enjoyed some of the cool ball physics, as well as the detailed sound effects that came with them. Sony San Diego has done its homework.
That said, there are issues with sound. Crowd noise is very good, the music selections aren’t bad, and some of the effects are cool. However, the commentary, provided by Chris Singleton and Jon “Boog” Sciambi (no, that’s really his name) repeats a wee bit too often. There is detail here, but these guys could’ve used a few more hours in the booth.

Play Ball
In spite of some issues on the field and some monetary questionability with future microtransactions, MLB The Show 22 continues to be a big hit on the baseball field. It looks fantastic and has great sound effects to spare, and the gameplay options are wide open, no matter where your baseball preference lies. You’re going to love hitting the field with this one, just in time for summer!

The Bottom Line: If you love baseball even just a little bit, you owe it to yourself to take a swing with the impressive MLB The Show 22. 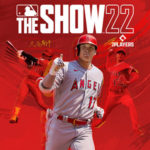