Piling on the nostalgia

While we’re going to get some Turtle-riffic beat-em-up action from Teenage Mutant Ninja Turtles: Shredder’s Revenge from Tribute Games sometime this year, it appears that isn’t enough when it comes to delivering shell-shocked nostalgia. With that, Konami has announced a new collection, Teenage Mutant Ninja Turtles: The Cowabunga Collection, which is set to hit consoles and PC sometime this summer.
Packed with 13 classic favorites from the NES/SNES/Sega Genesis/Game Boy/arcade era, the games featured here will feature hours of exciting fisticuffs, platforming and more. And, yes, even the original Ninja Turtles NES game is included, in case you feel like cursing out the underwater collection again.
But how good does this collection look? Well, judging by pre-order bonuses from Konami (alongside Nickelodeon) and presentation options, it could be a shell of a good hit.

What’s In the Package?
The following games will be available for play in the collection, with some (namely the beat-em-ups) including online play options.

Pretty much every Ninja Turtles game you can think of – save for that somewhat lame Turtles In Time Reshelled that came out a few years ago – is included, and retweaked to run smoothly on modern-day consoles. There’s also customizable wallpapers and other options to tweak in case you’re feeling completely nostalgic.
The beat-em-ups are fun, but Tournament Fighters – with all three versions included – is a beast in itself. They’re all completely different across the NES, Genesis and SNES versions, and each has diverse members of the cast to choose from. Our personal favorite clearly has to be the SNES version, which is about on par with what Street Fighter II offered at the time of its release.
There’s a lot to unpack here when it comes to popular titles, including both versions of Turtles In Time, as well as the original arcade game. But it’s the oddball favorites that are sure to be standouts as well, including the Game Boy trilogy as well as The Manhattan Project.
Needless to say, Konami is handling this collection really well thus far, and it’s sure to bring hours of retro fun whenever the team decides to release it. 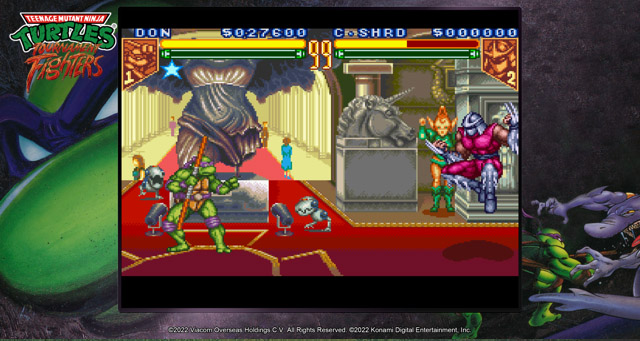 Go For the Collector’s Edition, Bro!
Along with a standard digital and physical edition going for $39.99, The Cowabunga Collection will also have a special Limited Edition. Going for $149.99, it’ll come packed with all sorts of shell-shocked goodies.
These include the game, an acrylic diorama featuring the Turtles in action, a 16” x 24” cloth poster, an enamel pin set, a set of 12 trading card, and a 180 page art book, filled to the brim with all sorts of details from the original games. The only thing missing is a gift card to pick up a Pizza Hut pizza to go along with everything. Oh, and that collector’s box is pretty damn dreamy, too. 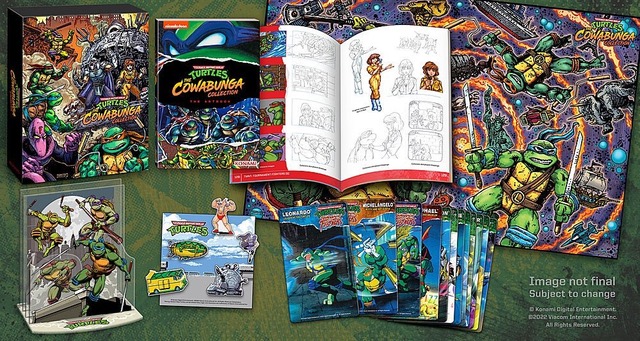 We know you Turtle fans won’t want to miss out on this, and the good news is that you can pre-order it now. There’s no word on the game’s release, but, again, it shouldn’t be too long.

Shell Out Cash For This, Dudes
Teenage Mutant Ninja Turtles: The Cowabunga Collection looks like a dreamy package for anyone that grew up with any of their games. With beautiful animation, abundant extras, online play for select games and a stacked Limited Edition, it could be the stuff of shell-shocked legend once it arrives this summer. We’re counting the days, dudes.