Over the weekend, Sonic the Hedgehog 2 made box office history, becoming the highest-opening video game-licensed movie ever with $71 million in the United States. In hindsight, it’s easy to see why. Like the original, it’s a lot of fun.
Most of that credit goes to the voice cast behind the characters, along with some great Easter eggs from the game (and other places!), as well as a manic performance by Jim Carrey. It does slog in others, but the movie still manages to reach the finish line in stride – and gets us excited for a third chapter. 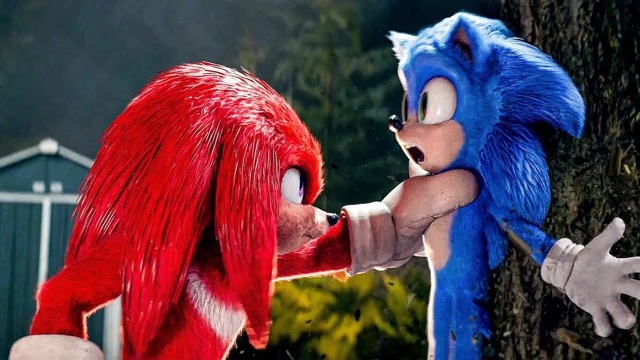 Back In Action
The movie kicks off with Dr. Robotnik (Jim Carrey) escaping his mushroom world captivity with the help of a newcomer, Knuckles the Echidna (voiced by Idris Elba), who seeks the Master Emerald. The two decide to team up, closing in on Sonic (voiced by Ben Schwartz), who’s enjoying a comfortable stay at home while his human buddies Tom (James Marsden) and Maddie (Tika Sumpter) go to a wedding.
It’s not long before trouble brews, but Sonic ends up being saved by Tails (Colleen O’Shaughnessey, who also voices the character in the games), and the two set out to find the Master Emerald before Robotnik and Knuckles do. What follows is a race that offers some swift action sequences, including a dazzling sequence with Sonic doing some snowboarding. Yep, that’s from the game.
Overall, the movie’s got some nice pacing. However, when it focuses on the “human” content, it lulls. For instance, the wedding with Rachel (Natasha Rothwell) and the involvement of government agents go on too long. But it’s made up for with a wicked finale involving a gigantic Death Egg-esque robot, as well as a post-credits scene that nicely paves the way for part three.
We won’t say how, but…stick around.
Plus there are some neat Easter eggs throughout, including some fun nods to the game, and one for Parks and Recreation that you probably wouldn’t expect. Just enjoy them all and have a field day with it, because it could’ve been wayyyyyy worse (like having that original Sonic the Hedgehog character model – yikes). 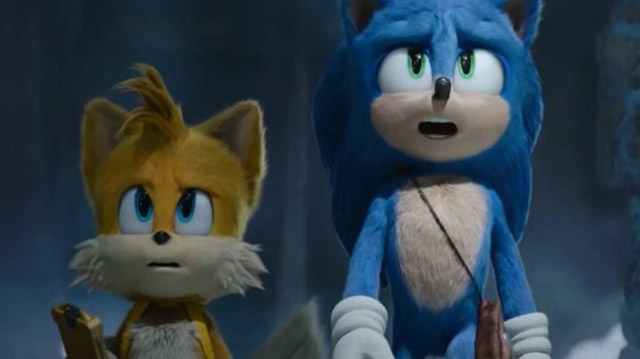 Some Good Performances In All
Even if some of the human characters don’t have much presence in the film (we never thought we’d say this, but we need more Agent Stone), it’s more than made up for by the others. Schwartz feels right at home as Sonic, while O’Shaughnessey has terrific chemistry with him as Tails. And Elba has a field day as Knuckles, showing a gruff side but also having some hilarious moments, such as his attempt to read a text message out loud.
Marsden has his moments as Sonic’s inspiration, especially at the beginning; and it’s fun to see Adam Pally as Wade, though his time is cut a bit short, too. Fortunately, Jim Carrey brings it on home as an overly manic Robotnik, complete with his trademark look from the games. If this is indeed his acting swan song, he went out with a thunderous bang. (But here’s hoping he comes back.)
Like we said, this paves the way for a third go-around, and hopefully director Jeff Fowler will return for it. He’s got this Sonic pacing nailed down pretty nicely, flaws and all, and we can’t imagine seeing a third outing without him at the wheel.

Go Super Fast (To the Theater)
Overall, Sonic the Hedgehog 2 isn’t a perfect game film, but it’s a highly satisfying one filled with laughs, nods, and terrific performances. It does get a little muddled with its human story, but still stays afloat with well-done action, some genuinely good jokes and, of course, Carrey being delightfully over-the-top. Plus the voice actors fit right in, especially Elba, who makes a darn good Echidna. Who knew?
And again, stay for the mid-credits.