We Bought the Super Mario Bros. The Movie Blu-Ray and We’re Totally Fine With It

Super Mario Bros. The Movie is something that will live in infamy – and for all the wrong reasons, sort of. The troubled Hollywood production completely missed the point of the games, going for an outlandish sci-fi adventure for all ages instead. And while the actors involved (namely the late Bob Hoskins and Dennis Hopper) regretted making the box-office bomb, it’s
since become a cult classic.
Alas, its home release has been somewhat limited because of this, with a paltry DVD released years ago and a Second Sight-produced Blu-Ray that never made its way to the U.S. shores. But now, Umbrella (not to be confused with the Resident Evil corporation) has released a new region-free version on Blu-Ray that gives fans everything they want from the film – and a little bit more for good measure.

Standing the Test of Time With So-Bad-It’s-Goodness
The movie stars Bob Hoskins and John Leguizamo as the brothers that aren’t brothers, the Marios, as they find themselves pitted against Koopa (Dennis Hopper, with insanely bad hair), who’s out to merge pieces of a meteorite together to blend his primitive world with Earth.
Along for the ride is Daisy (Samantha Mathis), who finds herself in peril thanks to said meteorite.
Look, the film is silly. Like beyond silly. The effects are ridiculously over-the-top, the set pieces are wild, the tone is completely off the game’s world, and the performances barely hang on to whatever little the script has to offer. And yet, there’s something smile-inducing about the whole thing, a ridiculous affair that falls into the “so bad it’s good” category. Even with its lame, cheesy standards, there’s something you can have fun with throughout. Maybe it’s Fisher Stevens being one of Koopa’s goons, or Lance Henriksen in an all-too-brief cameo as a slime-covered king.
Whatever the case, this disaster has become a gem over the years, and while the Universal- produced animated film will no doubt blow it out of the water in terms of theme, there’s still a place in the lexicon for this “masterpiece,” as it were. Just forget the stupid script problems, the lame direction (from Rocky Morton and Annabel Jenkel, who actually got kicked off their own set at one point) and the logic of it all, and just smile and enjoy a piece of 90s cinema. 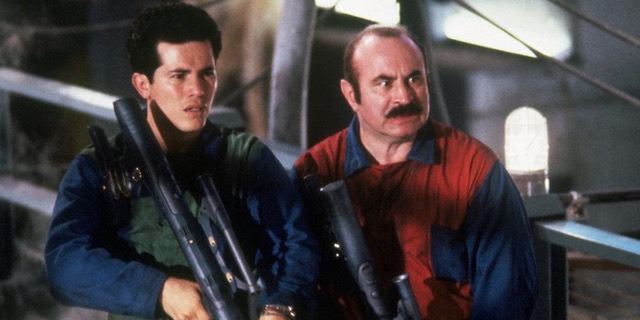 A Solid Transfer of Cheesy Material
For its latest Blu-Ray treatment, Umbrella has given Super Mario Bros. The Movie a respectable video transfer. It’s not perfect, as the effects somehow look worse with Blu-Ray (especially the evaporation of the Twin Tower buildings by Koopa – that scene has somehow returned in this cut after being removed following 9/11); but it’s leagues better than either the Second Sight
Blu-Ray or the DVD. It’s the best the movie has ever looked, and its 1:66 ratio allows you to see all the details.
The audio transfer is good too. It sits at a 2.0 stereo soundtrack, and lacks the 5.1 DTS-HD Master Audio that was on the previous release. But it’s got a good solid mix, you can hear everything clearly enough, and still laugh at all the jokes. (Not to mention the inclusion of close captioning, so we can finally learn how to spell “corpulent”.)

Bonus Features, Anyone?
If there’s a movie that didn’t really deserve “bonus features” to delve into the production, it’s Super Mario Bros. the Movie. But there are plenty here, with some really cool results.
First off, a workprint of the movie exists, revealing some deleted scenes that, believe it or not, blend into the final product better than before. Its quality isn’t the best, but it’s worth a view for fans, just like the previously released online “director’s cut”.
There’s also a This Ain’t No Video Game Documentary special, with a number of interviews with the directors and some of the cast (Leguizamo is game, God bless him), who talk about how the production went awry, and some other good stories. Ever wonder how strippers got on the set?
Well then…
There’s also a classic 1993 making-of featurette that’s good vintage stuff; some image galleries if you want some new wallpaper for your phone; a few behind-the-scenes storyboards and photos; and, of course, the classic trailer with the mismatched soundtrack. I mean, the movie’s soundtrack is sooooo much better. Who doesn’t want to walk the dinosaur?! 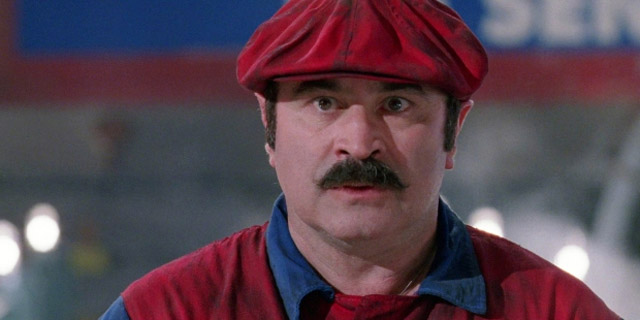 Mario!
While Super Mario Bros. The Movie probably won’t be everyone’s speed (some have brushed it off entirely and played the games instead), it’s a piece of 90s cheese cinema that’s deserving to be added to many libraries. Umbrella’s treatment is beyond respectable, with an exceptional transfer, backed by a ton of extras and a rare workprint of what could’ve been with the “true” cut of the film. Sure, it’s dumb as a bag of hammers, but you’ll have a good time with it anyway, or my name isn’t Luigi Mario. (Wait, what do you mean it isn’t?!)
You can pick up the Blu-Ray through eBay or a number of online retailers.

We’re giving away a game platform of your choice! Find out how you can win here.