If at first you don’t succeed, shoot, shoot again.

While the 2019 shoot-em-up Rico likely won’t be put into the same class as, say, Halo Infinite, it’s still got its charms. It’s a fast-paced shooter where you clear room after room of baddies, all while picking up ammo and using slo-mo to your advantage with each new entry. Now, we have the sequel, Rico: London, which follows a similar status quo, but with some interesting touch-ups.
Alas, that doesn’t necessarily mean all of them work. There are limitations (and, sigh, bugs) that get in the way of putting this game on the next level where it should be. Still, if you oved the original or just want a quick, mindless way of shooting thugs in the face, you could do worse.

Breach and Clear, and Repeat
The game essentially asks you to take control of a police officer as you make your way through a building, clearing out each room that has thugs in it. No sense just calmly opening a door, though – you’re kicking the sucker down, shooting first and asking questions later. The thing is, you’ll want to make the most out of your slo-mo ability. It only lasts a few seconds, so you’ll need to prepare with each procedurally generated room, before you get shot to bits and have to use one of your few revives. (Once you run out, surprise, it’s game over.)
While the game is built for single player thrills, you can involve a friend in co-op as well. And it’s not bad, though it does take a little time to set up. Once you do, though, you can work together to clear out a room, all while picking up ammunition and using secondary abilities, such as a throwing knife that will obliterate an opponent once it lands. Just be careful, though – you only have so many, and you can only refill once you get to the end of a stage. 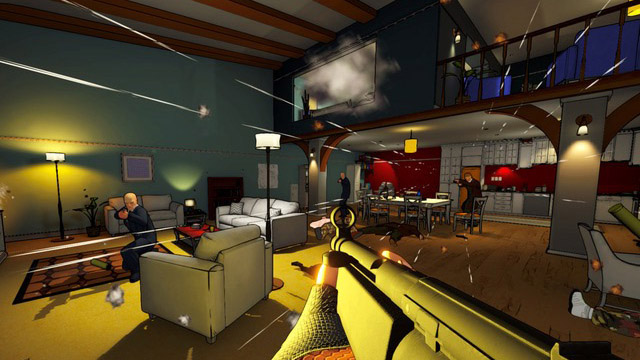 Decent Gameplay, With a Catch
Like the original game before it, Rico: London works best as an arcade-style shooter. The controls respond pretty well over the course of the game, and it’s fairly easy to aim your weapon at the baddies and plow them with bullets. (Though you may want to restock on ammunition where you can.) The only problem is that the hit detection can sometimes be off, especially at charging enemies that are right in front of you. They keep swinging even after taking a few bullets, which makes no sense. That’s just part of the bugs that are in the game, which, hopefully, will see a patch job sooner rather than later.
There are some perks you can upgrade to with the shop between each stage, including buying more revives and picking up secondary weapons. But they don’t really differ from the regular weapons, despite the fancy paint jobs and even the nods to classics like, say, Goldeneye 64.
That, coupled with the game’s higher-up difficulty, makes it hard to really make any progress.
That is, unless you’re in co-op, which makes things slightly easier.
The game’s not bad, it’s just…a little short when it comes to offering long-term thrills? But when it comes to quick shoot-em-up action, it’s not too shabby. 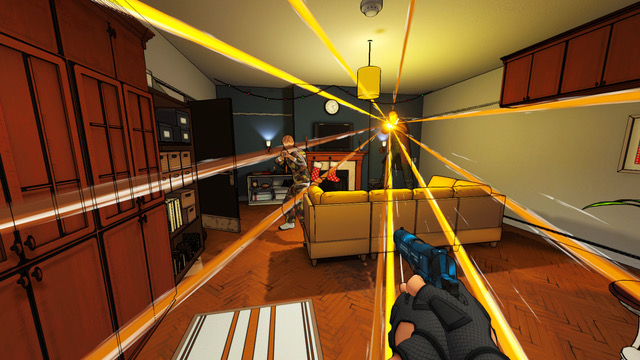 Not the Best Looking Game
As we mentioned before, Rico: London definitely has some bugs, and it shows with the generic character design and occasional weird animations. The levels themselves, which change after each play, are nicely put together though; and there’s a lot of room to figure out a strategy within your few seconds of slo-mo goodness. Just make the most of it, however, or you might just be toast.The sound is okay, but nothing memorable. The music tends to repeat more often than it should; and the voiceovers are cheesy, though it is hilarious to hear them be slowed down as well. It’s not often you get to plug a dude when he’s screaming at you in a monotone delivery.

Lock and Load?
Whether you like Rico: London really depends on your tolerance level. If it’s a large-scale first-person shooter you’re after with rewards to reap, this isn’t your game. If it’s an in-depth story you’re after, yeah, no, this isn’t it. But if it’s all about quick, violent thrills for you or something you can engage in with the right partner, it’s not a bad choice. As long as you’re aware of the cheesefest you’re getting into, you’ll be all right.
If you survive, of course.

We’re giving away a game console of your choice in time for the holidays! Find out how you can win here. 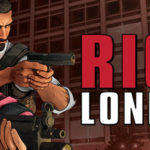