While Asterix may not be the hottest thing going in animation on these shores, he’s incredibly popular overseas, thanks to a French comic book series that continues to go over well with fans. So it’s no surprise, then, that him and his buddy Obelix are the focus of numerous game releases.
Now Microids is back with another go around, but this one is much different from their previous endeavors. Asterix and Obelix: Slap Them All is based on an obscure Konami arcade game, where side-scrolling beat-em-up action is the focus. This is where the developers at Mr. Nutz Studio (yes, that’s really what they’re called) put their finest effort, as they fill the game with beautiful hand-drawn animation and slapstick-themed combat, allowing either hero (or both of them together, if you prefer co-op) to knock them down like bowling pins.
Is it the deepest gaming experience? No. But if brawlers are your thing, this one’s worth adding to your collection. 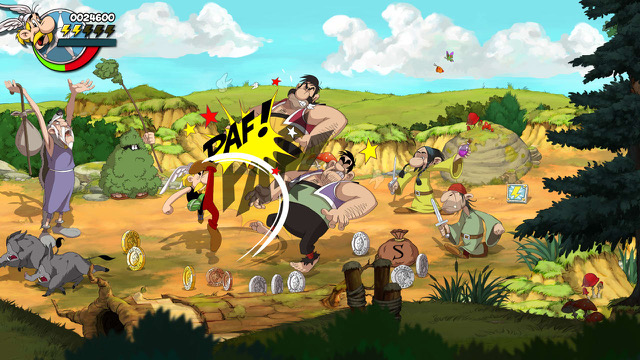 The Gaul of These Enemies
The game’s plotline has Asterix and Obelix making their way across the countryside, battling vile Romans as they attempt to overtake villages in the name of greed. Along the way, they’ll help out secondary characters by clearing the field of enemies, but the general tactic remains the same – fight, move on, and fight some more.
Slap Them All’s story is mostly forgettable compared to other Asterix games, but no matter. It sets the stage for some exciting beat-em-up action. Each character has some great moves to their credit, including a fantastic running attack, as well as some fun grapple techniques. Obelix actually has one where he can slap an enemy into submission, before sending him into the sky with a rocket punch.
That said, you’ll still have a bit of a challenge ahead of you across the game’s six levels. Some enemies are beyond cheap with their throwing projectiles; and the later bosses in the game can put up quite a fight if you’re not prepared for it.
Luckily, the game does provide the option to add a second player if need be, via co-op. This makes for some great local sessions, and while it’s not four player like Konami’s other arcade releases, it’s still a great deal of fun. 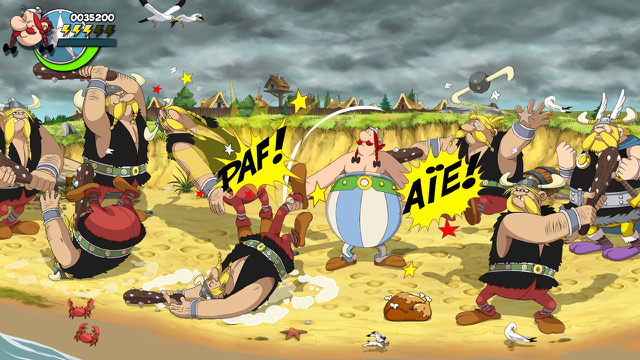 A Solid Presentation, With Mild Hiccups
As for the presentation, Mr. Nutz Studio once again proves that hand-drawn forte is definitely something Microids has harnessed for the better, just like its Toki releases before it. Slap Them All looks great with its hand-drawn animations and backdrops, giving the classic Konami game some new life and structure. It looks great in 4K on a TV screen (via the Xbox version), and even in handheld mode on the Switch, it comes across as a swell game. The only downside is when the screen becomes overwhelmed with enemies (which happens often) and you might lose track of your character.
Then there’s the audio. The music is pleasant but mostly forgettable, a collection of themes that try to paint Asterix in a heroic light. I would’ve preferred something a little more epic – this is a powerful pair of Vikings after all! – but it’ll suffice for long-time fans. However, the voicework becomes a bit repetitive for its own good, as the characters run through all their one-liners within a matter of moves. If I hear Asterix say something about a carousel one more time… 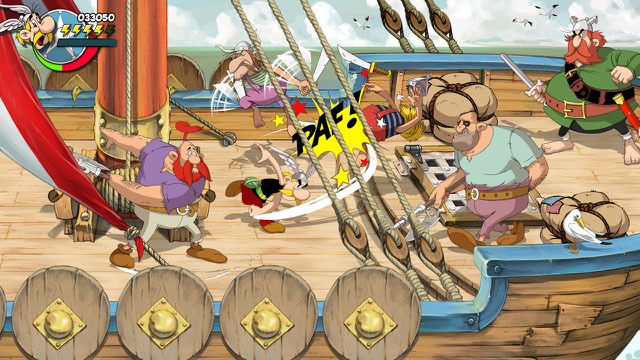 A Beat-Em-Up Fit For A Viking
While Slap Them All likely won’t take the place of more superior beat-em-ups like The Takeover and the mighty Streets of Rage 4, it nevertheless earns a proper place in your collection. Its art style is phenomenal and comes across beautifully on whatever screen you’re playing on; and the beat-em-up tactics are a blast, even if they grow slightly repetitive over time. (To be fair, that happens with many games in the genre.) And it’s awesome to play either solo or with a buddy or younger kid that just wants to pound on some enemies after a tough day at school.
So go ahead, add it to your collection and get slap happy!

We’re giving away a console of your choice for the holidays! Head to this page for a chance to win. 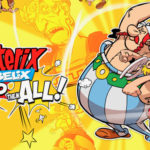