Not the highest quality product, but a must for fans.

So, this past weekend, before the rush of Black Friday sales hit, we managed to get our hands on one of those Xbox Series X mini-fridges that were making the rounds exclusively at Target.
And for retail price too, which is a sigh of relief considering that most scalpers are trying to get at least $150 (or more) out of it. So, yeah, bullet dodged.
The first thing you should know, right off the bat, is that it’s not nearly as cool as the full-sized fridge that a few lucky influencers and celebrities got. It doesn’t glow green colors inside with light-up features; and it doesn’t have any energy drinks already included in it. It’s also reasonably smaller, measuring at around 18 inches tall and 9” x 9” across and wide. So it only holds, methinks, about 12 sodas on its current shelves, though you can remove those if you want to store something a bit taller, like a couple bottles of Colt .45 or whatever your specialty drink may be. There’s also little pockets on the swiveling door itself, so you can put a couple of cheese sticks or whatever mini-snacks suit your fancy. Maybe avoid ice cream bars, though – you don’t want to make too much of a mess with your new purchase.
That aside, this fridge is pretty, um, cool? Is that the word to use? Yeah, cool.
First off, it actually does a good job cooling down to around 35 degrees or so, so your drinks get nice and chill inside without actually freezing over, something we’ve seen in older refrigerators. 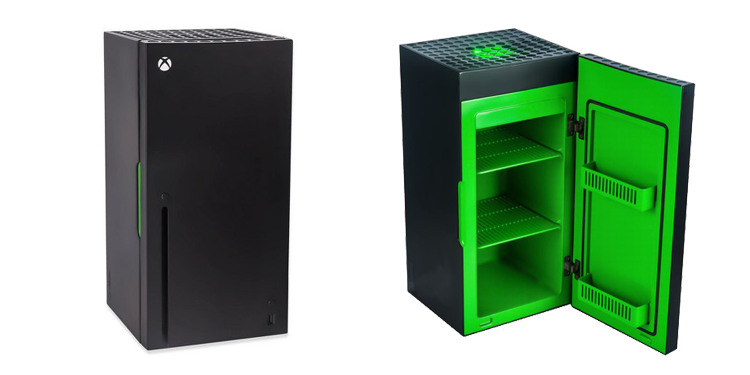 The door is also very accessible, as it’s easy to open and get whatever you’re drinking out of it with very little struggle. It’s a nice, practical fridge.
It’s also a bit of a technical marvel. It lacks lighting inside, sure, but it’s nice and green, recapturing the vibe of the Xbox to begin with. And the outer lighting is cool, with lights both above and with the Xbox logo in the corner that you can turn on and off however you see fit.
It’s also got a sleek design overall, which is pretty neat, though its size doesn’t exactly make it confusable with the Xbox Series X. In fact, you can store an X inside of it – we actually tried this and it worked out hilariously well.
You can also use the USB port on the lower front side to charge a controller, just in case you’re taking a break during game sessions and just need a cold drink to get ready for your next round.
This is an excellent feature, as you can also use it to charge your phone or what-not, depending what your needs are.
Finally, you can take the fridge with you. It comes with an AC power cable for in-home use, but also a DC plug-in for use in your car through the lighter port, should it have one. It works really well in this case, though you’ll want to find a secure spot so it doesn’t jostle around that much.
For a $100 fridge, this isn’t the most secure thing around, so be careful.
Overall, the fridge may not be everything we dreamed it would be (guess I have to install my own internal lights), but for a $99 purchase, it’s not bad at all. The USB charging and design are excellent; the performance is right up to par, even if the fan is a little loud at times (it sounds like a PlayStation 4 at some points); and it holds a decent amount of drinks for its size. It won’t rock your world like an actual Xbox fridge, but considering that’s pretty hard to come by without a retail model, this is the next best thing.
Prefer a PlayStation 5? Because we’re giving one away!