Definitive is a pretty sharp word. When it’s used, you expect something to be the best of something. You don’t just say “this is definitive pizza” and then microwave a Totino’s. Sure, you can say “here’s something that’ll fill you up,” but “definitive” is not the word to use.
And now we have Grand Theft Auto: The Trilogy – The Definitive Edition, and, surprise, it’s not what it says it is. It is a regathering of the three games that helped put the franchise on the map – Grand Theft Auto III, Grand Theft Auto: Vice City and Grand Theft Auto: San Andreas with touched-up visuals and “modernized” controls, whatever that means. But with its glitches and somewhat questionable quality in places, the word we would use to describe it isn’t exactly “definitive.” In fact, kind of going the opposite way. Undefinitive, if that’s a word.

Where It All Began
First, let’s look back at Grand Theft Auto III. We have fond memories of the PlayStation 2 version of this game, right down to Joey Pants (Pantoliano to some of you) giving us orders here and there.
There are notable improvements to this version of the game. It’s nice to have an in-game map, though it does take away from the good ol’ fashioned exploring. And it’s also great to set up GPS routes, a nice bonus if you’re in a rush.
It’s also good that the controls work better with some segments, thanks to the use of both analog sticks and being able to use weapons better. This makes some missions a bit easier, despite needing a small period of adjustment. Finally, you can restart missions nearly instantly, instead of having to go back and reload your last point to avoid using a precious save.
That said, the visuals look much cleaner here, but that kind of takes away from some of GTA III’s original distinction. It’s not really so down and dirty anymore. That could throw off some, along with some glitches that get in the way of the action. Overall, though, this one has some of the most distinctive changes of the three, so be sure to play it first. 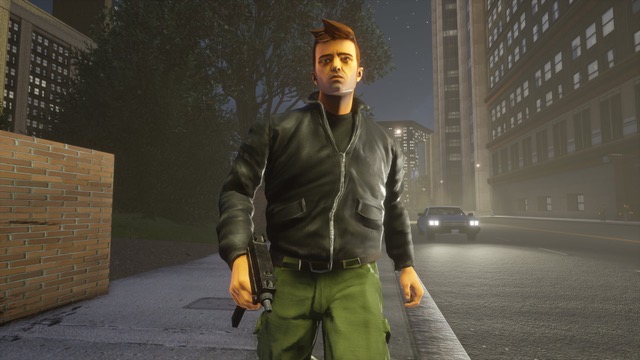 Life’s What You Make It?
Next up is Vice City, the homage to the 80s that is a clear favorite to many players of the series.
How could it not be with its all-star cast and wonderful music selections, which are mostly intact here (like the Talk Talk song referenced above)?
Like the previous game, some improvements are rather noteworthy here. But, again, you’ll notice several glitches come up in the mix, particularly with some character models. That’s a shame, because the improvements to some of this Miami-esque city are noteworthy, and the game does flow smoothly with some particular missions. The interiors also don’t look too bad once you manage to get past some of the errors within the game.
Also, can I just say it’s still kind of cool to use vehicles? A nice addition to the series, and they’re treated respectfully with the game’s controls. But it’s all too easy to end the ride here, thanks to enemies that have no trouble blasting you from the sky. Thank goodness for that quick restart though.
Accept the glitches (or wait for an update, which should be coming shortly), and you’ll find Vice City to be a somewhat welcome return.

The Samuel Jackson One
Finally, there’s San Andreas, the urban Grand Theft Auto game that is on many top lists. But here’s the thing – if you thought GTA III and Vice City had their problems, hang on tight, because this one’s a bit worse.
That includes questionable character models, as well as bugs that pop up all over. Even if you’re just taking a ride down Grove Street, you find some problematic issues. There’s also notable frame rate problems, as well as an all-out crash that forced us to restart entirely.
That’s a shame because the original material is still a blast when it works. The gunplay is still excellent, and the missions offer a great deal of variety. And the voice acting is top notch, including Samuel L. Jackson in his prime. He never gets old. 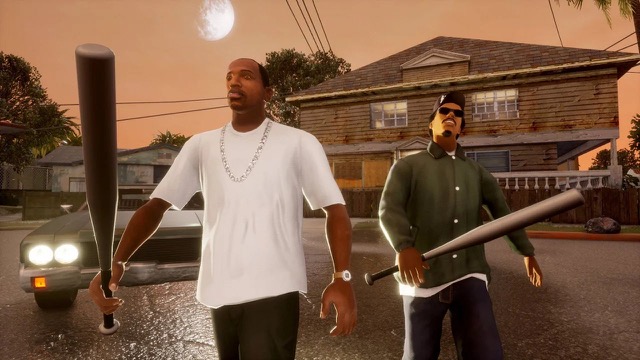 Some Work Needs To Be Done Here
Rockstar Games made some big promises when it announced the Definitive Trilogy just a few weeks back, and, sadly, this just feels like they didn’t fulfill many of them. Yes, they brought the original games back; and, yes, there are notable improvements. But you can tell this package was rushed, particularly with the headache-inducing San Andreas; and they disrespect what the original games (which, by the way, are no longer available for purchase) stood for in a way. I’m sure Rockstar will patch up like a storm getting these working to top level again, but, honestly, it should’ve just been delayed to at least January.
There are some memories to be had here, but considering the price tag and the problems that come with it, the Definitive Trilogy comes up short of fully entertaining. Once it’s patched, it’s sure to be a divine ride down a hectic road. As it stands, however, there’s way too many speed bumps. And they prevent this package from being anything but “definitive.”

Forget Black Friday. Win a PlayStation 5 from us! 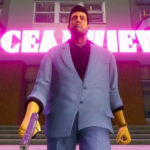