At one point, Ubisoft was set to have a huge Christmas season between Far Cry 6, Riders Republic and Rainbow Six Extraction, with these titles releasing within weeks of one another. But then the company had a realization that such a plan could be too much…not to mention Extraction could use a little more time in the oven. So it delayed Extraction into early next year, making the former two games its big, notable releases for the season.
We already provided our thoughts on Far Cry 6, which is excellent; but now we have Republic, an extreme sports title from the creators of Steep. And, like that game, it has a lot to offer, provided you’re in the mood for downhill biking, snowboarding, and other ridiculous activities. It packs a lot within its space, and despite the fact that some of it has some unnecessary characterization, the sports are the thing – and we’re happy to report that the team still nails it. 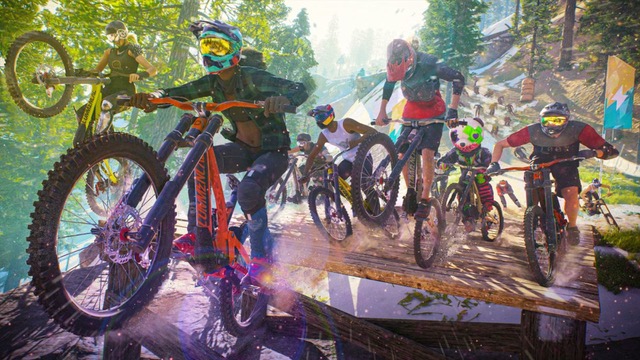 Grasping The Game Is Fairly Easy, And Rewarding
The game is widely accessible, with control options galore to make you feel right at home with your vehicle, along with a trick system that, though taking a while to grasp, is about where it needs to be. Again, not SSX or even Pure, so don’t go nuts. But it fits within the somewhat realistic mantra of the game.
There are two control methods in the game. The “Rider” one is the most basic to use, but “manual” offers some great tricks to learn, along with the ability to earn higher scores and XP rewards. In the face of heavy competition, it helps to get better in this category. But race however you wish – that’s the Riders Republic way of thinking that the community happily grasps. No pressure here, unlike the angry Rainbow Six Vegas group.
Finally, there’s a ton of gear to unlock, and it actually makes a difference in later races. You’ll see improved bikes and other equipment to choose from, along with some weird cosmetics that seem a bit out there. Am I really going to ride on a snowboard in a neon panda suit? Well, apparently, yes, yes I am. The options are wide open, and you’ll make good progress as you stick with the game.

A Sharp Affair, Despite The Corporatism
Riders Republic looks great on the PS5. The steady frame rate is welcome, the animations look realistic enough (aside from some painful crashes, oof) and the open-world environment is stunning. It can be a little too open at times, as you can sometimes manually travel to a spot, only to take your sweet time taking in the sights along the way. The weather effects are also cool to enjoy as well, though summer and winter is real quick here. POOF, SNOW.
That said, the corporate branding is well aware here. HERE’S RED BULL. MUCH RED BULL. Not to mention the fact that some annoying characters are shoved down your throat without the option to skip them. Yes, I know you want to help us and everything BUT CAN I RACE?! It would’ve helped to just give us a race option and let us jump in, but that only comes after you get past the game’s intro.
The sound is good too, with a decent mix of “alternate” tunes to get you racing (again, not SSX, just so you know) and some good sound effects. The voicework is all right as well, save for some of those characters that just have to sound like “bros,” if you will. Maybe just relax and let us do our thing, “bro.” Other than that, typical approach, but it works here.
Finally, I gotta bring up the game world again. It’s really impressive, with hours’ worth of stuff to do and a decent mid-sized hub that lets you access everything rather easily, from an open world map to lots of activities. You can even hook up with friends here if you wish – for a race, of course. Not saying that Riders Republic has a dating community or anything, but wouldn’t that be neat? 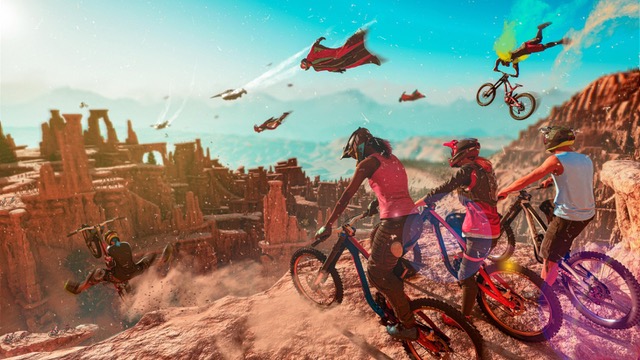 Riding Down The Mountain
While Riders Republic doesn’t exactly change the face of extreme sports games that we’ve gotten used to in the past, it’s a thrilling entry in the genre nevertheless. Despite some corporate branding that’s a bit much (DRINK RED BULL) and some characters that could’ve easily been cut out, the rest of the game works marvelously. Gameplay feels natural with a lot of options; and the presentation is pretty sharp, with miles upon miles of terrain to cover. It’s a nice evolution from the Steep team, and makes us wonder what it could be up to next. For now, though, there’s a lot to cover here in the Republic.
Is it a Must Buy? If you enjoy extreme sports or competing with friends in winter and summer activities, definitely pick it up. 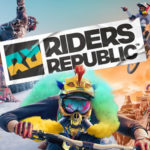