I was somewhat underwhelmed by Nintendo’s previous Super Mario Party for Nintendo Switch.
It offered up some decent action with local multiplayer but basically slammed the door on a lot of folks that were looking for classic fun that we’ve come to expect from the franchise. But now, just in time for the holiday season, they’re welcoming them back with a “greatest hits” style of package with Mario Party Superstars – and I’m pleased to say the ship has been righted. What Super Mario Party couldn’t accomplish, Superstars clearly does. It follows the general fundamentals, but does offer some great features like being able to plow through mini-games in a special mode, as well as online play for those unfortunate enough to not have buddies around. It’s the best of both worlds, and everything you could want in a Mario Party game.

Options Galore
The first thing you’ll notice about Mario Party Superstars is how darn accessible it is. Even if you’re a solo player, it opens up opportunities galore. You can fill slots either with human players or with CPU’s, and change their difficulty however you see fit, in case you want a challenge or just want to walk over folks.
You can also change up options and rules, in case you really feel like twisting around the rules to a game to your advantage – or take on a challenge to see how mighty your Mario Party skills are. There’s a lot to break down here, but if you want to make the perfect game, you’re able to do it. 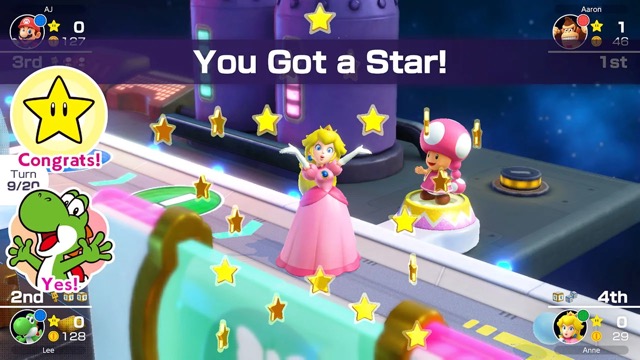 The game does only feature five boards, though that’ll likely change with updates. But they’re classics from the yesteryear of the series, mainly Mario Party 1 through 3. They’re varied enough, with some classic traps and a lot of mini-games to endure, but obviously you’ll have your favorites over others, depending on which Party you grew up with. All the same, there’s a lot to do here, and we have a feeling Nintendo isn’t done with the game yet.

Mini-Games!
Along with the main Party mode in Superstars, there’s a fun new mini-game cavalcade, where you can challenge others in a random mix of competitions. This actually picks up the pace of the game nicely, really putting the “party” emphasis into play. What’s more, you can play it and the main mode online with others, and the game connects nicely and quickly, so you don’t have to worry about getting in on the action. There’s not much to distinguish playing the game with bots or newcomers online (mind some of the folks that just live to be jerks), but it’s a great feature anyway.
There’s a good variety of mini-games here, and being able to go through them at random is a blast, as it leaves you anticipating what skills you’ll need to unleash next. It’s good stuff, and gives everyone a chance to win the day. 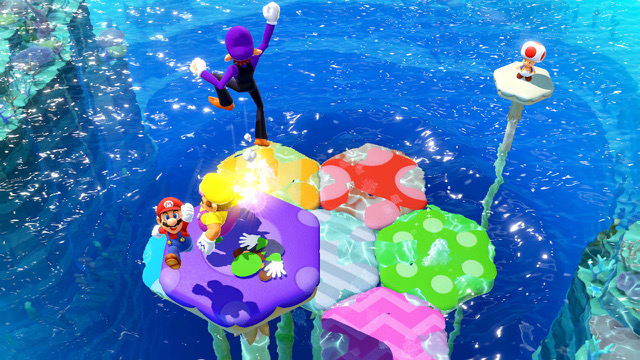 A Solid Looking Game
While Mario Party Superstars doesn’t try to reinvent the wheel like Super Mario Party did, it plays wonderfully as a “greatest hits” title. The animations are buttery smooth at 60 frames per second, and the characters retain their charming looks. What’s more, the boards look excellent, plucked straight out of the classics without missing a beat. The audio is good too, with expected sound effects and music that will make you feel at home with the Mario world.
So, no, the game doesn’t really innovate or stand out like, say, Mario Party 11 would have. But perhaps this serves as a warm-up for what’s to come, or it’s simply Nintendo’s way of saying, “Hey, we understand some of you weren’t crazy about Super Mario Party, so enjoy this.” We’ll take it either way. 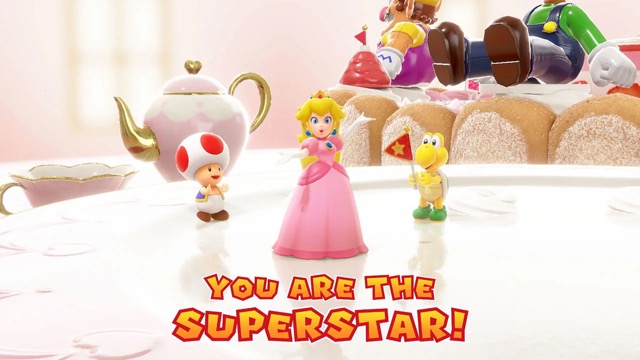 I Say Party On
While Mario Party Superstars clearly keeps its inspiration from the past, it benefits greatly from it. Everything that failed with some players with the previous release will totally click here, including online play and the brilliant option of playing with others online, as well as locally (which always rocks). The neat visuals and fun gameplay (unless you lose, of course) still hold up, and the package as a whole is well-rounded. And who knows, we could be getting more with updates, which is always nice. Indeed, it’s nice to have the Party back, right when we needed it.

Is It a Must Buy?
It’s an absolute must for Mario Party fans, as well as those that want to have some good old-fashioned fun on the Switch. And if you have family in your household, double that.

Get your November started right – we’re giving away a PlayStation 5! 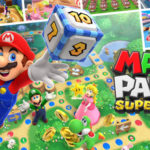