Marvel’s Guardians Of The Galaxy Review

Marvel’s Avengers has gotten a lot of flak over the past year between updates to multiplayer, the activation of purchasable cosmetics (despite a promise from the publisher they wouldn’t do that) and other minor quibbles. But probably the biggest thing is that the single player campaign, as cool as it was introducing Ms. Marvel, didn’t have the “oomph” of, say, the Marvel Cinematic Universe.
So, in opposite fashion of what Crystal Dynamics did with that game, Eidos Montreal did an interesting 180 with Marvel’s Guardians of the Galaxy. Rather than introducing intricate multiplayer and other features that would add on to the game, the team decided to focus on a worthwhile single player campaign, where you take primary control of Star-Lord while calling on fellow Guardians to assist when necessary.
That does take away from potential with the game to some. But it also introduces a killer dynamic that focuses on story – and if we recall, Marvel was always about the story. So, of course, the game wins as a result.

The Story’s The Thing
And the scope of the story featured in Guardians is really something. That’s because Eidos ingeniously makes choices vital, similar to what Telltale did with its Guardians games years ago. This can lead to different dialogue choices, and even slightly different bends within the story itself. As a result, the group can change quite a bit, but, in essence, it’s all about fun.
That’s because the team continuously wisecrack with one another. The game doesn’t take itself super-serious like Avengers did, and instead goes for a relaxed, fun attitude like the James Gunn-directed films before it. The voices are different, and even the designs have been tweaked so it’s not exactly like the movies. But the vibe is definitely there, and it’s excellent.
The voice acting helps quite a bit, with some great choices for characters, as well as a few surprises. And they’re backed by a soundtrack that’s absolutely top notch, with 80s tunes like Autograph’s “Turn Up the Radio,” amongst other key choices. In fact, this is probably the most fun I’ve had with an 80s soundtrack since the good ol’ days of GTA: Vice City. Well played, Eidos. 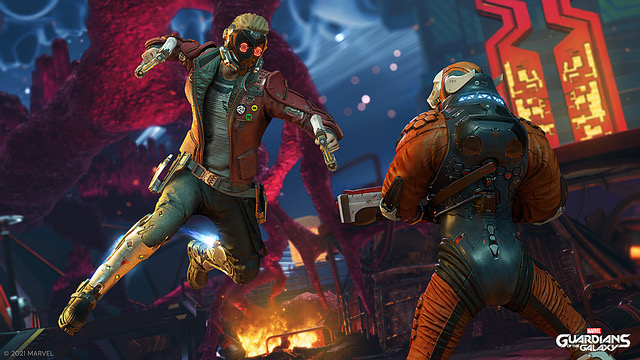 Gameplay Holds Up Well
As we mentioned above, you only take control of Star-Lord on this venture. But he handles quite well with his fast movement and run-and-gun style gameplay, and it grows on you as you take on tougher opponents. But what’s great is how the fellow Guardians can lend a hand, from Rocket activating traps to Groot building wood bridges to Gamora and Drax doing their ass- kickery.
You can unlock even more potential stuff as the game goes on, adding on to the gameplay even if it remains about the same in nature. What’s more, there’s some cool stuff involving the Milano; and you can find additional costumes to unlock in-game (take that, microtransactions!) to suit up your heroes with.
Again, I’m sure some folks would’ve liked multiplayer to some extent, but I like the simple, laser-focused approach here; and it pays off for those frustrated by trying to get into Avengers’ many modes just to get that one key outfit. Guardians plays it much cooler.

A Good Looking Universe
You’d think Marvel’s Avengers would be getting all the attention visually when it comes to a Marvel game from Square Enix. But, surprise, Guardians of the Galaxy looks wonderful. The various worlds you’ll explore really stand out when it comes to color and design; and the enemies are just as creative, especially the “big bads” that really take the story in an unexpected direction – even if you’re used to what the films have to offer.
As far as what version we prefer, we played the game on both PS5 and Xbox Series X and they look astounding, moving at a beautiful frame rate without missing an ounce of detail. The animations are sharp as well, especially with Groot’s cool wood abilities. It just looks built for next-gen, though I’m sure previous-gen players will be fine with a lower frame rate and slightly less detail.
That said, I wish the Switch version was better. It’s based on the Cloud instead of being put on the cartridge. I tried out the trial version and it just ran slow. Not only that, but it was missing crucial details as well. Maybe hold off until Square Enix improves servers. You can try that demo, but make sure you upgrade to another version (if you can), or else you’ll be out $60 on a buggy version of a superb game. 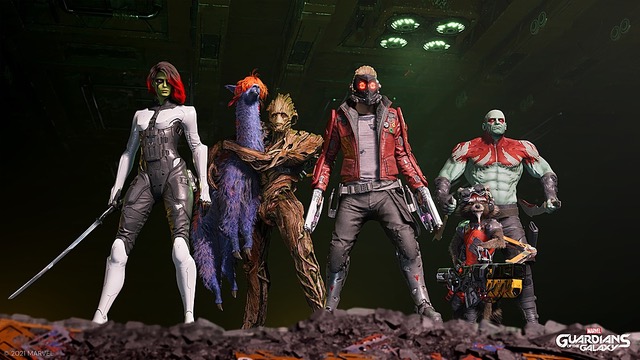 Come And Get Your Love
While Marvel’s Avengers is still a great experience, I love the different route that Marvel’s Guardians of the Galaxy took. It’s loaded with dialogue choices and decisions that can craft your team in different ways; and the number of abilities and costumes you can unlock are really cool. Top that off with a rockin’ (literally) presentation and fun gameplay, and you have a galaxy-sized adventure that you shouldn’t miss out on…unless it’s on Nintendo Switch.
Seriously, Square, pick up on those servers.
If you’re a fan of the comic, this is a must. But even if you’re not, Guardians of the Galaxy just might make you one. Just like Groot.
Is It a Must Buy? Comic book fans and those that enjoy an awesome single player experience will definitely get hooked on this feeling.

Want to play Guardians of the Galaxy on a PlayStation 5? We’re giving one away! 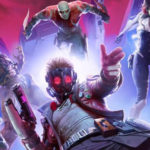