So why the heck can’t Valve count to three anyway? I mean, we all made a joke about Half-Life 3 at this point, but where is Left 4 Dead 3? The first two games were massive hits for the company, but then…poof. Aside from some expansion improvements and little tweaks here and there, we never got that third chapter that we were clamoring for. It’s like they hit us with a one-two zombie punch and left us to get fed upon.
Ah, but Turtle Rock Studios didn’t give up. The developers of the franchise have move on from their Evolve experiment and teamed up with Warner Bros. Games to give us the spiritual Left 4 Dead successor we’ve been waiting for, Back 4 Blood. And despite a few technical shortcomings, it gives us all the zombie-killing action we could ever hope for.

Following The Blueprint
Naming aside, Back 4 Blood has Left 4 Dead’s blueprint completely intact. You take a group of four heavily armed survivors and move your way from zone to zone, completing small objectives and occasionally taking on hordes (will you idiots stop scaring birds?!) before making it to a saferoom, where you can stock up on supplies and health. Along the way, you’ll work together as a team and occasionally use cards to give you certain advantages, and possible challenges as you face the undead, both big and small.
The cards can lead to a neat little deck-building aspect, where you can form abilities for your character and make them dependable in certain areas, like regaining lost health or using a weapon when you’re unleashing a quick melee attack, resulting in a quicker kill on a zombie. 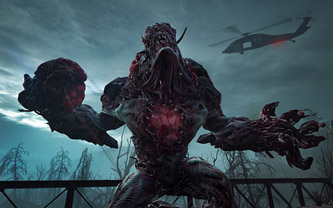 You can also power up weapons, pick up more useful items and build a better overall strategy with your squad.
That and the general gameplay remains about the same, but continues to be quite intense.
Working together as a team in Back 4 Blood is absolutely vital for survival. Run ahead and you could find yourself overwhelmed by a pair of Exploders or fending off a Sleeper the best you can. Staying with your group, however, will assure better survival and allow you to work more closely with your team – a nice tactic to have after you accidentally shoot them a few times. “Sorry!”
I love the attachments as well. You can make improvements to your weapons on the fly, such as adding a scope, activating abilities and more. They really help when you’re trying to mow something big down – such as an ogre. Go for the weak spots!

Not Much On The Solo Side
Back 4 Blood works best as a multiplayer endeavor, and its online works wonders here. You can activate Crossplay and invite all sorts of friends to the zombie-killing fray, and the sessions work wonderfully as far as connectivity and interaction goes. The ping rate can be off at times depending on certain connections (is that dude using an AOL server?!), but overall it’s a smooth, easygoing experience when it comes to keeping together.
That said, it would’ve been nice to have a split-screen option for local play. Not everyone is good at finding an online group to work with, and it would’ve been a huge bonus for those interested in playing Goldeneye-style against the horde. Alas, it’s not here. At least, not yet.
There’s always a chance at a patch. 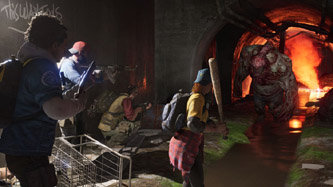 As for solo play, well, it’s solo play. You can go at it with three other “bot” soldiers and try your best against the horde, but it isn’t quite the same. It’s still fun as heck, especially when you get your hands on an absolutely awesome weapon, but the “bots” aren’t as helpful as human counterparts. Still, if it’s training you need before you join the online fray, it’s not a bad place to start. And there’s some decent backstory here as well.

A Great Looking Bloodbath
Turtle Rock Studios definitely did its homework here, and with the help of a bigger budget from Warner Bros. Games, it absolutely nails it with Back 4 Blood. The game looks marvelous on both the PS5 and Xbox Series X, with a 60 frames per second framerate, which doesn’t let up even with all the chaos happening on-screen. The environments are stunning as well, painting a city overrun with corruption and madness. The lighting is just about perfect as well.
The game also benefits from solid animations, as well as a whole lot of bloodshed. There’s a reason it’s called Back 4 Blood, folks. There are minor glitches that pop up, but nothing that gets in the way of the overall experience. Plus I’m sure Turtle Rock is aware of these problems and trying to smooth them over already.
Audio is also excellent. The voiceovers are really well done, signifying each of the characters that are included here. And kudos to the Linda Hamilton-esque soundalike, as she feels right at home here. The zombie effects, intense music and awesome weapon noises round out the package overall.

Go Get Your Friends And Go 4 It
We’ll probably never see a Left 4 Dead 3 at this point, so enjoy Back 4 Blood for everything that it has to offer. It’s a symbolic tribute to the franchise, while at the same time offering a bevy of new content to keep you challenged and coming back for more. Its solo content isn’t much, but get a good group of players together and you’ve got a party on your hands. And just in time 4 Halloween, too…

Is It a Must Buy?: If you’re a fan of Left 4 Dead and co-op themed zombie shooting goodness, absolutely. If you’re a solo player, consider a rental first, or check it out on Xbox Game Pass. 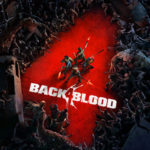