How do you top entries in an ongoing series where notable villains make their debut in a larger-than-life fashion? Well, you don’t really, you just go with the flow. At least, that’s what Ubisoft has been doing with Far Cry. Over the years it’s introduced its fair share of power-hungry megalomaniacs – not to mention straight-up maniacs. So why change what works?
Far Cry 6 continues to follow that mantra, taking us to the island of Yara, modeled closely by the real-life locale of Cuba. Here, Anton Castillo, portrayed by actor Giancarlo Esposito (The Mandalorian), rules with an iron fist, making his power shift all the more obvious with growing military forces. 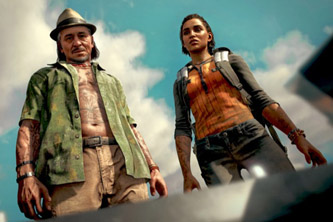 But one person that isn’t so deterred to follow his rule is Dani Rojas, a young vigilante who teams up with whoever they can come across to turn the tide. This includes weapons dealers, loyal soldiers and even animals like a little roller dog and a loyal crocodile that makes no qualms about turning someone into lunch. It all ties together into a fun package that, while lacking somewhat in innovation, more than makes up for it with well-orchestrated chaos. And when it comes to Far Cry, that’s not a bad way to go.

A Lot To Do, And A Lot To Do It With
As with any game, Far Cry 6 starts your character off on the right foot, introducing them to general mechanics and then sending them out upon the island, making new allies along the way. It’s here that you’ll learn how to invade depots for supplies, as well as completing secondary missions and growing your young vigilante into something greater. What’s great about the island of Yara is that it gives you a ton to do – even by general standards of Far Cry. Just when you think you’ve found all the missions, one or two really good ones pop up. That adds to the overall longevity of the game, always giving you something to do. But there’s story here as well – probably the most in-depth for a Far Cry game yet. That’s because we learn more about our hero here than the nameless characters we’ve dealt with in the past, as they’re included in cutscenes and everything. And their involvement with Anton is really something, not only because you see the connection with your plight, but also get to see Esposito chew up the screen as one of the series’ best villains yet. Seriously, he owns the game even when he’s not really in it.
Along with main missions, there are also Yaran Stories and Treasure Hunts to uncover, adding even more replay value. This will let you really see what the island is all about, while at the same time bumping up the challenge. 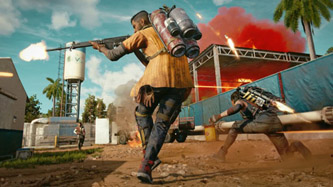 Fortunately, the gameplay keeps up every step of the way. Along with the run and gun tactics we’ve come to expect from Far Cry, the newest chapter introduces new components, such as being able to craft some truly badass weapons. Not sure why anyone would make one based on the Macarena song, but screw it, here it is. It’s really neat how the game continues to operate smoothly with this diversity, while still keeping the chaos freshly balanced. It shows just how much the series has grown from the somewhat held-back Far Cry 5. (Yeah, I was bothered by its slight limitations.)
Plus, the tone for the game seems about right. Whereas the last couple of games got too serious for their own good, Far Cry 6 finds a better, looser rhythm that fits it like a glove. And you have to embrace the sheer absurdity of a soldier that’s able to call upon a crocodile amigo to devour whoever they want, like a loyal dog.

A Real Winner For Next Gen
Far Cry 6 also shines presentation-wise. The voice acting is excellent, and we don’t just mean what Esposito brings to the picture. All the acting is well done here, give or take a couple of cornball lines; and the music is top notch too, with some key selections.
As for looks, this is easily one of the best looking entries in the series yet. It’s nicely polished for next gen systems like PS5 and Xbox Series X; and it has a smooth frame rate to boot, even during some intense gun battles. It can stunt a slight bit, particularly with cutscenes, but overall it’s a real looker, and a peak performer if you’ve been looking for Far Cry to make a meaningful debut on next-gen. It definitely does.

A Far Cry From The Norm
Despite some hiccups with smaller missions and frame rate here and there, Far Cry 6 is a real winner. It takes the lessons that were learned with previous entries in the series and rolls on with flying colors, all while introducing an island that’s worth the exploration and a villain that’s one for the ages. It’s hardly perfect, but it does move the series forward – and leaves us wondering what could be next for Far Cry 7. 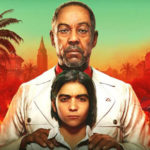