It doesn’t hurt to inject humor into your proceedings. Sure, you don’t exactly what to approach Naked Gun-style shenanigans in a first-person shooter, but playing it super-serious without loosening up a little bit can be a bit much. That’s not saying, “Hey, Master Chief better smile in this game,” but sometimes playing it fast and loose is more fun than having to be straightened up the whole time.
Hence, the approach that makes Deathloop stand out. The latest from Arkane Lyon, the studio behind Dishonored and Prey, strays away from those super-serious efforts for something way more stylish – and a bit more fun. It’s imaginative and thrilling, while at the same time serving a wink in the eye to fans of the genre with genuine character building, great interaction, and a story that, surprisingly enough, doesn’t get dull.

Let’s Do That Again
The story follows Colt, a man who finds himself waking up from a hangover on a mysterious island. He’s not sure what’s going on, but he’s got some insanely good survivor skills, as well as the ability to use weapons and build gadgets. Oh, and there’s some woman named Julianne trying to make his life a living hell. It’s only playing through parts of the game does he slowly realize what’s going on – and trying to figure out how to stop it. 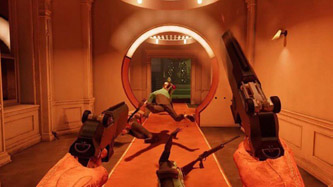 To spoil the story wouldn’t be that fun, so the best thing I can say is experience Deathloop for itself. Throughout, there’s a lot of interesting twists that would hold up in any solid time-travel product, all tied around a beautiful 60s style motif that really comes together quite nicely. In fact, Dishonored games aside, this could be one of the most stylish games ever put together in Bethesda’s realm. It’s really something.
Tying all the gameplay aspects together is the ability to use relapses to try an area a second and even third time, in case an approach didn’t work for you; as well as being able to try new loadouts, or maybe try your luck mowing down opponents with a machete. It’s up to you, and how Deathloop plays out with its time-warping concept is nutty goodness. It’s a lot of fun to play, even though some may get disoriented at first figuring things out. Once you warm up, however, you’ll find Deathloop to your liking, especially as you unlock new abilities and come up with kills that are along the lines of the stuff of legends. This is really good.
Also, it’s great how the online component doesn’t get in the way of the story. Essentially, a second player can hop into your session as the assassin that wants to kill you. It’s really something, and worth trying out when you’re not trying to discover the secrets of the loop.

Exquisite Design
As if the gameplay wasn’t enough to make Deathloop worth recommending, there’s also the visual design, which is stunning. Again, the 60s approach is cool, and the open world structure is staggering, with a lot of ground to cover in imaginative ways. In fact, you may not play through the same way twice, just to see what new approaches can do for you – and how twisted your run through each of the mysterious inhabitants can be.
The visuals look great in terms of frame rate and detail, and it’s also great how some of the enemies appear. However, there are mild glitches that can get in the way of the party sometimes, but don’t let it get you down. They’re probably going to be smoothed over any day now, and you’ll be good as gold.
Faring just as well is the audio. The in-game music is excellent when it chimes in, perfectly fitting the tone of the graphics. Also, the sound effects are cool, with each weapon providing cool effects and other neat little touches here and there. However, if anything really wins here, it’s the dialogue between Colt and Juliana. They’re just so awesome to listen to here, like an old couple that never get tired of each other, though they indicate they’re tired of each other.
There’s more to the dynamic here, but I’ll never tell. And the way it comes through the PS5 DualSense controller is pretty damn awesome, to boot.

Take the Loop For a Spin
Overall, despite small shortcomings with difficulty scale and the presentation, Deathloop is a thrilling surprise. It’s one of Bethesda’s best games in years, an original, mind-boggling thrill ride that doesn’t let up. And it has a tremendous amount of character depth, not to mention some bold story choices and fun gameplay options. It really feels like the total package, even if that means having to do some things over again. Hey, when it comes to this particular loop, we don’t mind getting stuck. 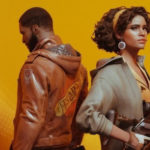