You can find us at the club.

Considering we got Mario Tennis Aces a little while back for the system, it was just a matter of time before the developers at Camelot decided to give Mario Golf a swing on the Nintendo Switch platform.
And now we have Super Rush, an oddly named title that may not be the best in the series due to lack of features, but still comes up with a solid swinging time for those of you that can’t resist doing something with your golf clubs.

The Best Way To Play
Super Rush takes advantage of different control types, but your best bet is probably the push-button style of play. With this, you hit a button once to begin a meter, then hit it a second time to get the power gauge set up, and then one final time to add spin or get the most accuracy out of the shot. If you prefer, you can add spin or some degrees to the golf swing, depending on where you want it to land.
If you’re an old-schooler, you can also opt for motion controls, which aren’t too shabby in the least. Though it may tire out certain players, the general control motions are nicely captured, and it’s easy to set up key shots.
There are also certain challenges to overcome on each of the courses as well, including “lightning zones” that prevent you from hitting a ball at full power if you land in them the wrong way. It’s a neat idea, though some folks may be frustrated by placement in some spots. Ah well.

Multiplayer’s The Thing, But Single Player Isn’t Bad
There are a lot of modes in Super Rush, which makes up for the fact there are only a handful of courses. Six in all, actually. But let’s take a look at the various ways to play. 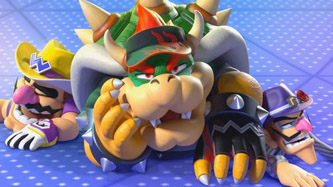 The big draw here is Golf Adventure, where you guide a Mii character through a fun little golf career. It may be boring for some, but there are some neat challenges here, especially boss battles where you can test your mettle against Bowser and others. It’s good fun for the younger set, or for solo players looking to practice with the game. You can also get in quick rounds, if you prefer.
Multiplayer, though, is where the game shines. You can play with up to four people either locally or online through Nintendo Switch Online, and connections work very easily here.
The real treat are the Speed Golf and Battle Golf modes. With Speed Golf, you try to play as quick a game as you possibly can. But, in Battle Golf, you actually get into a foot race after each swing, with the ability to knock down opponents if you feel aggressive enough.
I do wish more courses were included here, but hopefully Camelot will add some to keep interest going. Look at what they did with Mario Aces. I have a feeling the franchise is still in good hands here.

A Sharp Looking Game, Even Without Heavy Invention
Mario Golf: Super Rush doesn’t really reinvent the wheel for the series, as it relies more on a general presentation rather than one that stands out, kinda like Mushroom Tour did on GameCube. Still, it’s not a bad looking game at all.
The course design is exquisite; the animations are sharp; the bonus outfits are neat; and the game as a whole just looks excellent. It’s also great how nicely the golf motions are actually captured, right down to the ball landing on a green or the camera zooming in as it comes bearing down towards the hole.
The sound’s okay, with decent (yet repetitive) and solid sound effects.
But I was really hoping for more variety from the announcer. We see the Toads speaking on-screen, but never really hear them. This is one situation where it actually would’ve been nice to have their feedback. Again, maybe an update can fix this.

Swing Baby!
Though not the perfect Mario Golf sequel, Super Rush is a reasonably good time for fans of the series. It particularly shines in multiplayer, though the Golf Adventure mode is a plus as well. And it’s always good for a few quick rounds if you’re in the mood for it. It may not be the best set of clubs you’ll ever own, but you’ll still get a good game out of them. 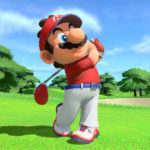