Pillage for your plunder.

The Dungeons & Dragons series hasn’t really seen much action in the game industry these days, despite the fact that it continues to be a timeless favorite on the tabletop front. But how do you convert that into a passable game effort that won’t bore fans of the lore? Well, Toque Games seems to have a pretty good idea.
Dark Alliance, a game that has more to do with traditional action fare than the classic Baldur’s Gate titles, isn’t bad when it comes to hacking and slashing for your loot. But it does have its fair share of problems, putting a little bit of dullness on the axe. Still, if you’ve got a suitable group of combateers that live for nothing more than carving up goblins into sashimi, you could do far, far worse.

The Hack, The Slash And The Loot
The game offers up four different characters to choose from, each with different skill sets. Some are better with barbarian skills, including one that literally has an axe to grind. Others fare better at a distance, with a traditional set of bow and arrows, instead of sending off a spark from their melee weapon. Whoever you choose, you’ll have your hands full against demons big and small, blocking, dodging and parrying attacks while you hack away.
Dark Alliance works similarly to the previously released Warhammer: Vermintide II, with missions that last a good half hour or so, and then send you back to a home base to level up, talk with a local vendor and then set out on the next one, either alone or with friends. It works reasonably well here; and the loading time is pretty fast, thanks to the processing power of the PS5.
That said, the game lacks balance between single player and multiplayer. Yes, you could tackle these monsters on your own, but you’ll find yourself at greater odds, since you’re literally going solo and without computer-operated cohorts at your side. That would’ve fared much better, as you’re likely to die quickly if you fail to block and parry properly. 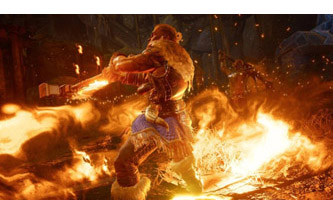 Thankfully, multiplayer works much better, as you can team up to take on tough bosses and other adversaries that stand in your way. And connection looks to run pretty smoothly for the most part, depending on when you hop into a session.
This is the best way to go, though I suppose you could do single player if you really want to get a hang of the combat. Just be prepared to climb a mountain. A mountain soaked in goblin drool.

Not A Bad Looker, But Not Next Level Either
As for Dark Alliance’s presentation, it’s not bad. The visuals do impress, running at a beautiful 60 FPS and featuring some solid combat animation, particularly from enemies. There’s also some pretty good landscapes here, especially ones that you visit later on in the game.
And yet, you can also see certain limits in the visuals, particularly when it comes to changing up the terrain. It definitely fits the Dungeons & Dragons mood, mind you, but a little imagination could’ve gone further here, especially with the game’s platforming. It’s not that it’s broken by any means, but it seems more like PS4 territory when it comes to general design, instead of going all out for that next-gen gusto. Die-hard players won’t mind, but some may look at this, then back at Ratchet & Clank: Rift Apart, and wonder what the big deal with this particular title is. Still, for what it is, it’s suitable, just not a “step up,” as it were.
The sound is alright, too. The banter is a little too comical for its own good, but well-acted and filled with enough character. The music is good too; and the goblin effects, as you might guess, are goblin-y enough. (Is that a term? It should be a term.)

A Decent Hack-And-Slash Romp That Could Get Better
There are things about Dark Alliance that keep it from greatness. The combat’s not bad, and there are some fun missions here and there. But the lack of balance, particularly with single player, is highly noticeable; and the design doesn’t entirely scream next-gen.
That said, it’s still a decent D&D romp, and fans should eat up all the loot they can get to make their soldiers better. And it’s a good time with friends, provided they don’t mind working alongside you to conquer the beasts instead of doing their own thing. Dark Alliance may not bang the drum loudly enough for Dungeons & Dragons to make a life-changing debut on next-gen, but you get the rhythm in just the right amount that it’s worth a listen. 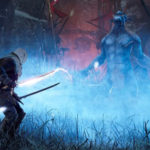