Ryu Hayabusa’s journey from the NES to modern-day gaming has been one filled with all sorts of action, but one thing remains clear – this is a series that truly defines what being a ninja is all about. Sure, some of his moves may be outrageously athletic (like the Izuna Drop, which still defies logic), but there’s nothing like watching him be a bad-ass against human and demon enemies alike.
Over the years, Ryu has been celebrated with a number of challenging entries in the Ninja Gaiden saga. Now, for those that may have missed out, the Sigma games, alongside Ninja Gaiden 3: Razor’s Edge, have returned for another go-around with Master Collection. Now, the title might be a bit misleading as there’s nothing “master”-ful about it, since it’s just a gathering of solid ports of the three main games – and not even the original first two adventures like we can play on other platforms.
That said, once you accept that – and also the fact that the games look damn good running in 4K – you’re in for a bloody ride. And one that continues to deliver as we yearn to see what the next chapter holds for Ryu.

Ninja Gaiden Sigma
The first game is probably the best still, as it introduces Ryu in a modern light (even though the game is very old at this point) and debuts his skills in the best way possible. 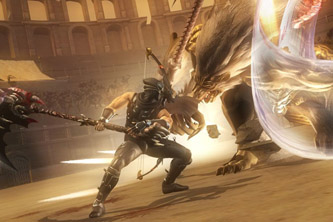 This port is impressive, running at a beautiful frame rate and featuring all sorts of details, along with insanely cool (and difficult) boss battles. It also has satisfying gameplay, as well as options for those that may not be as skillful at these games as they would’ve hoped. Even if it is kind of a “dog” setting. No worries – a dog can still have its day.

Ninja Gaiden Sigma 2
A terrific sequel in every sense of the word, Sigma 2 picks up right where the first game left off, with some insanely good beat-em-up action, a variety of cool weapons, some bonus segments and some gorgeous levels. Fighting enemies amidst a Tokyo skyline is very cool; and there’s also some moments later on that keep the game flowing smoothly.
As before, the gameplay holds up really well with the port; and it’s also running at a pretty solid frame rate on the PS5. The camera does occasionally have issues readjusting to Ryu’s movements (he’s too damn fast), but no matter. This is still a swell-looking game. And it has options too, in case you need to lighten things up.

Ninja Gaiden 3: Razor’s Edge
Considered probably the weakest entry in the modern trilogy, Razor’s Edge is a reprieve from the mistake-laden Ninja Gaiden 3. And despite its silly storyline and lack of logic, it’s still razor sharp as far as I’m concerned. It has some great boss battles, including a fight with a robotic T-Rex that has to be seen to be believed. And it may be running the smoothest of all three games, even though the camera, again, can be Ryu’s worst enemy. 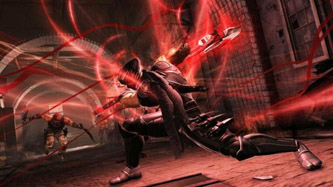 I think I would’ve liked this compilation even more with a few things. Maybe the NES version as an unlockable, or even the whole trilogy. (It is a Master Collection, is it not?) Or, at the very least, the original Ninja Gaiden games from the Xbox/Xbox 360 days. The code isn’t that long gone, is it? Wait, is it? Sigh.

Go Get ‘Em Ninja
Even though the ports lack in certain spots and this doesn’t really feel like a true “master collection” as it’s dubbed, Ninja Gaiden Master Collection remains a fun trilogy of titles worth going after. The first two games alone are worth their weight in gold, even with missing original titles; and the third, while getting a lot of flack from critics, still has its moments. Pick it up for your collection, and, don’t forget, go ninja go ninja go! 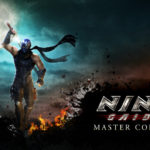