Although it’s a bit odd that only Ratchet & Clank have escaped from the void that most PlayStation 2 franchises have fallen into, it’s still amazing how far the duo have come from those early adventures. With their arrival on a new platform, they seem to revolutionize things, from Ratchet and Clank Future: Tools of Destruction on PlayStation 3 to Ratchet & Clank (2016)on PlayStation 4, which recently got a nice little frame rate boost to prepare folks for the next- generation of the pair.

And now we have Rift Apart, which comes to us from the tireless Insomniac Games, a team that just put together the amazing Spider-Man: Miles Morales just months prior. I was concerned this team wasn’t getting any rest between blockbusters, though staffers indicate that they completed these games without a hint of “crunch,” something that usually befalls other studios to get games done. What’s even more nuts about all this is Rift Apart is every bit as good as Miles Morales when it comes to taking advantage of the PS5 hardware. In fact, this game might just be better, an interactive cartoon that surprises and amuses around every corner. Hopefully, it’ll set a standard for other platforming adventures to follow. Looking at you, Sly Cooper and Jak and Daxter.

The New Kid In Town
The adventure follows Ratchet and Clank as they tangle with Dr. Nefarious, who creates rift- based issues across the universe thanks to a rather neat gizmo. This only creates more trouble when a second Nefarious enters the picture. Fortunately, the duo isn’t alone, as they’re introduced to Rivet, a female Lombax who’s every bit as good as Ratchet. 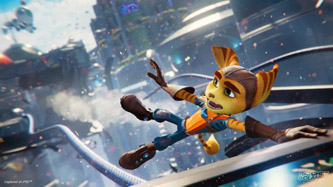 Over the course of the adventure, players will switch between these characters as they try to repair Nefarious’ damage, while also dealing with his lizard and robot cohorts. That’s easier said than done, thanks to their large numbers and bosses that require a great deal of ammunition. Luckily, a strong array of weapons, available through a sassy but lovable vendor, will help you complete each mission.
Rivet fits right into the series beautifully, thanks to strong voicework from Jennifer Hale (of Mass Effect fame) and amazing abilities, including being able to “suck” through rifts to instantaneously reach new parts of the stage. She’s a fun addition to the series, and one that’s more than welcome to make a return for new ones.
The gameplay between the characters is mesmerizing, and a lot of fun. Gun battles are just as insanely good as ever, especially on higher difficulty; and the abilities, including the grapple shot and using your wrench for melee and throwing attacks, is excellent. And it feels like second nature on the DualSense, thanks to modified controls where you feel everything happening in real-time. It’s so much better than typical rumble, you may not go back to Ratchet and Clank’s 2016 adventure. It feels that good.

This One Really Brings Out The Best On PS5
Considering that Ratchet & Clank: Rift Apart is just one of a handful of PS5 games that also aren’t going to PS4 (Returnal is in that group, too), we figure there’s a reason for that. After all, Insomniac really wants to push the hardware, right? Boy, do they. 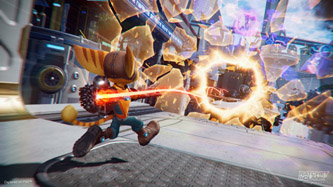 First off, the game has a number of performance modes, depending on whether you prefer visual detail or fast speed at 60fps. I recommended the frame rate boost, because the game still looks phenomenal in this mode. Especially with ray tracing turned on. In fact, aside from some minor visual blemishes and the occasional oddball enemy behavior, this game looks like a dream throughout. The combat is a joy to watch, the cinema scenes blend seamlessly with the in-game stuff, the animation is razor sharp and the way levels warp into each other without a hint of loading time is pretty much incredible. This is a showcase piece for the PS5, through and through – and keep in mind we’re only within its first year.
On top of that, the audio is excellent, too. Along with the outstanding, humorous voice acting we’ve become accustomed to, the weapon effects are a blast (literally) and the music is right up there with some of the best in the series. It really is as fun to listen to as it is to play, especially if you’ve got a pair of proper headphones. Good time to stock up if you haven’t.

A Good Trip That Lasts Longer Than Expected
The core Ratchet and Clank: Rift Apart experience lasts around 12-16 hours, depending how much you explore for secret goodies and collect various weapons within the game. There’s also a Challenge Mode that’s excellent, especially for those that are really ready to tackle the threats out there in the universe. So there’s a lot to do, even without multiplayer or bonus levels. Make sure you stay for the whole journey.
Insomniac Games floors us yet again with a title that’s sure to be amongst our best of the year once the final list whittles down. Rift Apart is a highly impressive piece of PS5 showcasing, while at the same time continuing to be a fun, wildly entertaining blast-a-thon with our favorite duo.
Just about everything is done perfectly (mind some slight stuff that can be ironed out), and it goes as long as you want it to, depending on your universe-saving needed. I kind of hoped for more Captain Qwark myself, but ah well, it’s Ratchet – and Rivet’s show. Don’t miss it. 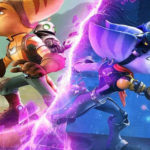