Something to play while you wait for Metroid Prime 4.

While we have to wait a bit longer to see how Metroid Prime 4 will shape up, Nintendo surprised its fans today with a long-awaited entry in the series – Metroid 5! 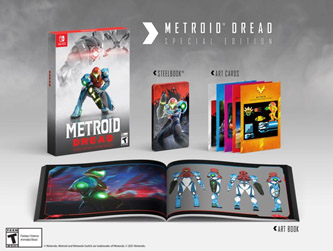 The long-awaited Metroid Dread, which originally surfaced as a sequel to Metroid Fusion back in 2006, will finally make its debut on the Nintendo Switch on October 8th. And it looks to be a terrific 2D entry in the series, taking it back to its roots.
In the game, Samus faces off against dangerous enemies, including the powerful E.M.M.I., a nearly indestructible robot that has a bone to pick with her. Fortunately, she has a few abilities that can help her out, including the ability to turn invisible in some spots, as well as her strong array of weaponry.
The game looks sharp thus far, with a unique art style that stands out in the series. However, its 2D roots are undeniable, and look to be lots of fun for the Switch. We’ll see how the final game fares soon enough.
There will be a pair of special Amiibo released alongside the game, including a special Samus figure, alongside an E.M.M.I. one. And scope out the special edition of the game below, complete with Steelbook and more!
The trailer is below, so give it a look and prepare to fill your nights with Dread!