Time to beat more coins out of thugs.

As if there wasn’t enough River City Girls beat-em-up fun to go around, today, during the Limited Run Games stream, WayForward announced not one but two follow-ups that are set to debut over the next few months. 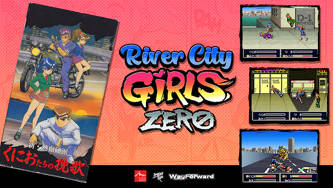 River City Girls Zero, a retro-themed prequel, will come first later this year on Nintendo Switch, PlayStation platforms, Xbox platforms and PC. River City Girls 2, the long-awaited sequel, will follow up sometime next year on those same platforms.
Let’s break down each of the games in the descriptions below:

River City Girls 2
Picking up shortly after the original, River City Girls 2 once again put players in control of Misako and Kyoko — as well as Kunio, Riki, and other characters — as they set out on an all new beat-’em-up adventure across the mean streets of River City. New moves, new enemies, new recruits, new environments, and the return of an old foe await, along with the same over-the-top sense of humor and adrenaline-pumping combat of its predecessor. The game will also feature two-player co-op action both locally and online.

River City Girls Zero
River City Girls Zero, meanwhile, lets players experience the first time that Misako and Kyoko teamed up with Kunio and Riki to take to the streets in hard-hitting, curb-stomping action. While the graphics, music, and gameplay all remain true to the classic 16-bit Super Famicom release, this version marks the first time the 1994 game will be localized for the West. A new opening cinematic, new manga cutscenes, and new theme song by River City Girls composer Megan McDuffee have been added as well. Set out solo or team up with a friend in local co-op and discover how the River City Girls story began!

Check out the trailer for the original game below and get ready to get those coins! BARF!